Home » World News » We’ve seen all this before 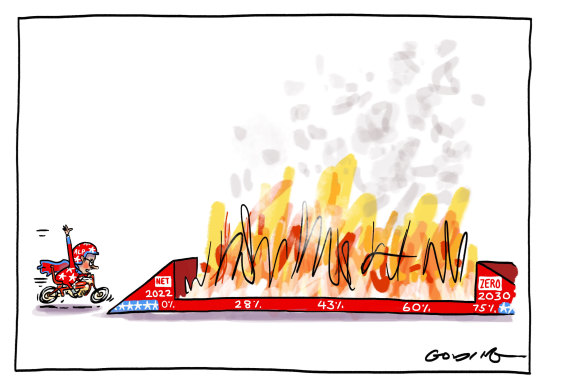 We’ve seen all this before

The intention of the Voice to Parliament is to provide advice on laws and policies that affect our Indigenous people.

It’s that simple. And yet we have conservatives such as Tony Abbott starting their “no” campaign by falsely suggesting it could somehow have veto over decisions of the parliament (“Rudd hits out at Abbott over Voice”, The Age, 6/8).

We have lived with this type of destructive, poisonous and fear-based type of politics for too long, yet Abbott will continue to be quoted as it gives a headline to a news article. But it does not give him relevance on an issue that looks to the future.
Doug Shaw, Sunbury

I’ll get to it … soon, really
Well done, Kathy Lette, for a refreshing commentary on men’s egregious failings (“You talking my language?”, Sunday Life, 31/7).

In less competent hands it might have been an iteration of what we blokes have come to call The Litany, and have heard a fair bit about in recent years. And at the risk of being presumptuous, she may have included (in ascending order of outrage) the Lists, the Last Toothpaste, and that infamous Lid up or Lid Down debate. But the wit and grace of a good writer have prevailed and no offence has been taken.

Just one thing, could we hold off working on it until after the grand final – it’s only a few weeks away.
John Margetts, Grovedale

Righting the wrongs …
In its first few months the Albanese government has had its hands full righting the many wrongs of the previous government. The granting of permanent visas for the Nadesalingam family is another step on that journey and demonstrates that compassion and fairness have prevailed (“Biloela family ‘finally home’”⁣⁣, The Age, 6/8).

The Biloela community have much to be proud of for their advocacy and persistence in supporting permanent residency for this family.
Anne Lyon, Camberwell

… but we’re not done yet
This is a wonderful outcome for the Nadesalingam family. This has been part of what continues to be a shameful dark shadow on our treatment of people seeking asylum.

As we celebrate the granting of permanent residency to this family, let us not forget those still lingering in offshore detention and temporary protection visas in our communities. The larger issue is the Labor government seems to have no intention of changing our border policies and respecting the International Refugee Convention, to which we are a signatory.

We have abrogated our responsibilities to many who have sought asylum here. A disgraceful episode that can never be erased.
Judith Morrison, Nunawading

Their time has passed
We need intelligent, fact-based policies and legislation on climate change, not political posturing. Especially not from former prime ministers dredging up “wrongs” from the past. That only foments conflict (“Greens are ‘the enemy of Labor’: Keating”, The Age, 4/8).

The majority in the parliament are on a path towards constructive change, recognising that climate change is an existential issue for everyone, whatever their politics.

Meanwhile, has-been politicians should butt out and leave the current batch to get on with it.
Lawrie Bradly, Surrey Hills

Hitting the wrong note
Your report about bullying and harassment at the Sydney Symphony Orchestra, although confronting, should come as no surprise (“Almost half of orchestra experienced harassment”, The Age, 5/8).

Behind the urbane veneer of great Western orchestras making sublime music lies a less savoury history of corrosive sexism and male conductors with “god-like” personas. The esteemed Berlin Philharmonic and Vienna Philharmonic outfits did not employ females for most of the 20th century; and there is YouTube footage of legendary podium figures like Toscanini in New York and Fritz Reiner in Chicago in the 1950s berating their players in public.

More recently, the great Royal Concertgebouw Orchestra in Amsterdam has been embroiled in allegations of sexual assaults, and demeaning of its female musicians, by eminent male conductors.

One can only hope that female conductors like Australia’s Simone Young will signal a change in culture.
Jon McMillan, Mount Eliza

The wilderness beckons
Peter Hartcher (“Labor gets off on the right foot”, Comment, 6/8) highlights the obstinacy of Peter Dutton and the Liberals in not accepting that the Australian public, including business groups, having been crying out for certainty in our fight against climate change.

The Liberals are making themselves irrelevant in the cut and thrust of the new parliament and will find themselves in the wilderness for some time unless they can come to terms with the fact that our nation is desperate for a co-ordinated and long-term plan to tackle the greatest challenge of our time.
Graeme Lechte, Brunswick West

Don’t forget the fence
While the new Labor government is importantly making inroads into repairing the relationship between China and Australia, and Penny Wong has been able to speak positively with her Chinese counterpart about China’s role in maintaining peace in the region, these discussions must be undertaken while at the same time maintaining an awareness of China’s wider expansion strategy.

China is an important trade partner and neighbour in the region, but as we set about mending fences and once again getting closer to China, we need to be willing to set boundaries and remember that “good fences make good neighbours”.
Claire Merry, Wantirna

Gay Alcorn sends an exclusive newsletter to subscribers each week. Sign up to receive her Note from the Editor.

NSW-Victoria border could open within a month