Home » World News » When the revolving door stops, we might know who the next premier will be

Labor heavyweights are engaged in a factional carve-up that could be more consequential in determining the next premier of Victoria than the November state election.

With news that four senior ministers are set to retire, factional haggling and horse-trading could go on for days, but the outcome will hint at who will have the unenviable task of following in the footsteps of Daniel Andrews, a political heavyweight of national significance and the state’s long-serving premier. 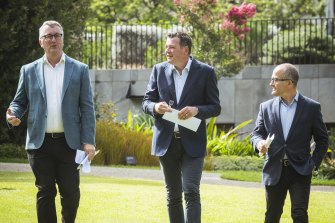 It would take a major boilover for the opposition to win from their current position. Five months out from the state election, the Coalition is a long way behind in the polls, according to The Age’s latest Resolve Political Monitor survey. Not impossible, but close to it.

And after 20 years in parliament and a serious recent back injury following a fall, it’s not hard to picture a scenario where Andrews passes the baton. Most Labor MPs agree that Transport Infrastructure Minister Jacinta Allan would be the premier’s pick of a successor. She is from the Socialist Left faction, the same as Andrews.

The thing is, it’s not really up to him. Nor is the makeup of his new cabinet.

When the cabinet is reshuffled following the quadruple retirement of Deputy Premier James Merlino, Health Minister Martin Foley, Police and Emergency Services Minister Lisa Neville, and Industry Support, Tourism and Sports Minister Martin Pakula, the premier won’t even get to pick their replacements.

Labor’s highly factionalised party structure means the factions are allotted a specific number of spots depending on how many MPs each grouping has. Andrews then hands out the portfolios.

He may not even get to pick his own deputy. It is a factional convention that the deputy comes from the opposing faction to the premier, but that is not guaranteed. There will also be pressure to select a woman.

That’s not to say that a premier expected to deliver a third term of government doesn’t have sway. Of course he does. He’s popular with the public and keeps a tight rein on dissent from his MPs.

Beneath the surface, though, Labor is going through enormous factional upheaval.

The internal status quo of the party that won the past two elections has been upended. Since the 2018 “Danslide”, the federal party launched a takeover following a branch-stacking scandal that led to the sacking of Right factional frontbenchers Adem Somyurek and Marlene Kairouz.

Elements of the Right, including the Shop, Distributive and Allied Employees Association and former senator Stephen Conroy’s faction, signed a stability pact with the Socialist Left earlier this year following the power vacuum left by Somyurek’s exit from the party.

Like all factional carve-ups, the so-called stability deal secured power for some but left others, such as MPs aligned with the Australian Workers Union and National Union of Workers, with diminished internal power.

So the dynamic has changed. And the premier will be working hard behind the scenes to exploit these factional divisions to install his preferred candidate, Allan, to replace Merlino as his deputy. 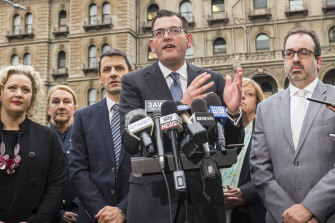 The Andrews cabinet has been a revolving door since the 2014 election. Some have left for their own reasons, others were shuffled out of the ministry. Some were made to walk the political plank.

Fourteen of Labor’s 72 upper and lower house MPs – almost 20 per cent of caucus members – had already announced their intention to retire in November before news broke of further retirements.

Of the premier’s eight-person COVID-19 crisis council, only three are likely to remain after the election: Andrews, Allan and Pallas.

When the revolving door stops spinning, we will learn a lot about which factions – and which candidates – have the upper hand in Labor’s succession race.

Time's 'Person of Year' goes to journalists, including Reuters pair