Home » World News » With Sri Lanka in freefall, this is what a collapsed economy looks like

Singapore: Last Sunday, when a new mother began suffering dangerous bleeding at a major Colombo hospital, an urgent call went out to one of its main consultant anaesthetists.

The mother needed to be rushed to surgery but the specialist was three kilometres away, stuck in an hours-long line at a petrol station without enough fuel to drive to the hospital. 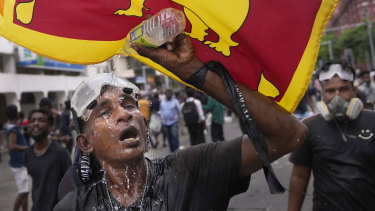 A protester washes his eyes to avoid tear gas effect during a protest in Colombo this month.Credit:AP

“She started looking for tuk-tuks but couldn’t find one and even asked the police for help to get to the hospital,” Yasuni Manikkage, another doctor at the hospital, told The Sydney Morning Herald and The Age.

Fortunately, the anaesthetist was eventually was able to get there, as a vehicle from the hospital was sent to pick her up. The mother was able to go into emergency surgery and after further treatment in the intensive-care unit, she is now recovering.

The incident, however, illustrates just how deeply and alarmingly the tentacles of Sri Lanka’s economic crisis extend.

Acute shortages of fuel, food, medicine and other basic items, as well as soaring prices, have left the bankrupt South Asian island in despair.

Prime Minister Ranil Wickremesinghe told parliament in Colombo this week “our economy has completely collapsed”, saying Sri Lanka was unable to buy oil and that countries were hesitant to provide fuel to the debt-laden nation even for what little cash it has. “We are now seeing signs of a possible fall to rock bottom,” he said.

So what does that look like on the ground?

With Sri Lanka unable to pay for key imports and prices of everything from dal to fish to milk soaring, the United Nations has said that almost 5 million citizens are skipping meals, as well as selling possessions like jewellery in order to eat. Among them are an estimated 56,000 severely malnourished children. 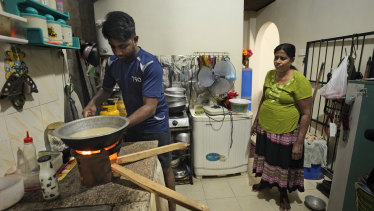 A mother and son cook with firewood at their home in Colombo.Credit:AP

Food insecurity was compounded by a failed ban on chemical fertilisers last year that reduced agricultural production by 50 per cent.

Community kitchens are popping up in Colombo and beyond, giving out free food, but preparing it is another major problem. Cooking gas has also become scarce, so many use firewood at home instead. There have been several reports of people collapsing and dying as they have lined up for hours in scorching heat to try to re-fill cylinders with gas or kerosene.

Motorists have for months been queueing for petrol and diesel, often overnight and in lines kilometres long. Among them are more than half a million three-wheeler drivers. According to news reports, there have been 10 deaths in the queues as people wait for 12 hours or more in their vehicles trying to fill up. 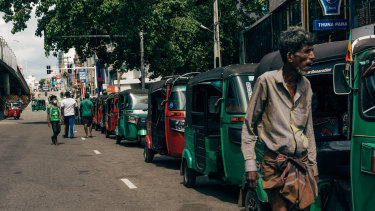 Prices are also at all-time highs as stocks run low. A trickle of fuel has arrived in recent weeks thanks to a $US4 billion ($5.8 billion) credit line with India but the last shipment under that deal turned up last week.

Energy Minister Kanchana Wijesekara said earlier this week that 40,000 megatons of petrol was arriving on Thursday and a limited amount would be distributed in the following two days. But Wickremesinghe admits that resolving fuel shortages “will take some time” because Sri Lanka can’t secure a monthly sum of $US550 million ($800 million) to pay for it.

Hospitals on the brink

The fuel shortfall is impacting on the ability of doctors, nurses and other medical staff to even make it to work to care for patients. Sri Lanka’s top cancer facility warned it is close to breaking point as a result and other hospitals have had to postpone and cancel heart and kidney operations. 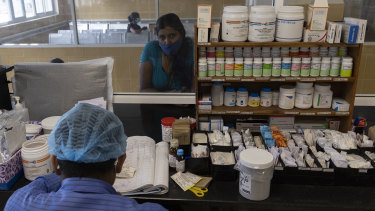 Sri Lankan hospitals do not have the funds to buy medicines needed for critically ill patients.Credit:Getty Images

Sri Lanka’s foreign currency crunch has also meant there has been a critical lack of life-saving drugs, vitamins and supplements for pregnant women, and equipment such as syringes, blood bags and endotracheal tubes to treat newborn children.

Doctors have also been hit with a pay cut of as much as 20 per cent, which the government imposed in May to raise revenue, and hospitals face an exodus of medical personnel who can earn much more overseas.

Nine people were killed in the biggest outbreak of violence during the crisis on May 9, triggered by pro-government loyalists attacking protesters outside the office of President Gotabaya Rajapaksa.
Police have since used tear gas to disperse demonstrators who continue to call for the president to resign.

There have also been reports of clashes at petrol stations including one motorist being stabbed to death by a tuk-tuk driver in March. In the same month a 12-year-old girl in the east coast town of Akkaraipattu was reportedly beaten of bleeding for stealing biscuits and milk powder from a store. 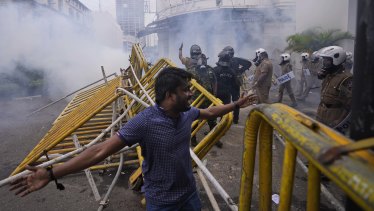 Demonstrators have continued to call for the resignation of President Gotabaya Rajapaksa.Credit:AP

Government offices and schools have closed down for two weeks this month as fuel ran out.

Sri Lanka’s 1 million-plus public servants have been given Fridays off for the next three months in order to preserve fuel and they’ve been encouraged to start growing their own food at home. The government is also allowing members of its workforce to travel overseas on leave without pay for the next five years so they can send money back to the cash-strapped country. There have been huge lines at passport offices, with people sleeping outside.

Sri Lanka is in talks with the International Monetary Fund about a bailout and also endeavouring to restructure its $51 billion in foreign debt, which it defaulted on in May as overseas currency reserves all but dissolved.

But analysts warn the country cannot expect a flood of money, whether it be bridging finance or humanitarian aid, to extricate it quickly from the collapse.

“We have to be realistic and look at the grand scheme of things in the world, with all of the pressures with Ukraine and in Africa and so on,” said Anush Wijesinghe, a research fellow at the Institute of Policy Studies of Sri Lanka.

“Sri Lanka is a blip on the screen when it comes to some of the big global challenges.”