It was on a rough desert track that Barry Eggleton spotted the two tiny dingo pups, like balls of pale fluff, huddled in the middle of the remote Strzelecki Track in South Australia.

After an unsuccessful search for a parent dingo, Eggleton discovered a third pup nearby, too dehydrated to move. He gave the pups water, left them in the desert and drove his company car to the closest airport, then flew to Sydney and drove to Newcastle to pick up his wife, Lyn, and their family vehicle. 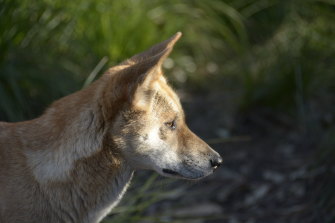 Sandy, the wild-born desert dingo whose genome was mapped, was found in the South Australian desert as a pup in 2014.

They drove 2500 kilometres back to the isolated spot where Eggleton had left the pups. Incredibly, the three desert dingoes were still there. They brought them home and hand-reared them.

Now, an international research consortium led by La Trobe University has sequenced the genome of one of the wild-born dingo pups, named Sandy Maliki, and revealed the evolutionary position of the mysterious Australian mammal.

The ecological role of dingoes has long been debated, with many scientists believing they are genetically the same as feral wild dogs. But Sandy’s full genetic sequence has revealed pure dingoes are an “intermediary” between wolves and domestic dog breeds, according to the research published on Saturday in Science Advances.

Scientists compared Sandy’s genome with those of a Greenland wolf and five domestic dog breeds, including the German shepherd and the world’s oldest known dog breed, the basenji.

La Trobe University Professor Bill Ballard, an expert in comparative ecology and senior author on the paper, said the findings gave scientists clearer insight into how the dingo evolved and would offer new ways to monitor dingo health and ensure their long-term survival. 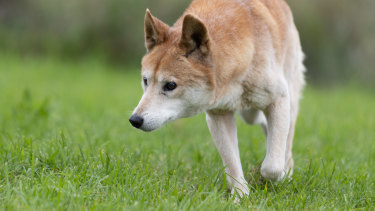 A dingo at the Dingo Discovery Sanctuary and Research Centre in Toolern Vale. Credit:Jason South

“Dingoes are Australia’s top order predator – meaning they influence everything in their environment,” Ballard said.

“If dingoes aren’t given the protection they deserve, it will upset the country’s ecological balance – potentially leading to environmental issues like erosion and species extinction.”

One of the key differences between dingoes and dogs is the number of copies of the pancreatic “amylase” gene they have, researchers found. A pure dingo has only one copy of the amylase gene, whereas domestic dogs have multiple copies. This influences the gut microbiome, appetite and, scientists believe, what dingoes eat.

Based on this new knowledge, Ballard said his team hypothesised that dingoes were far less likely to eat farm animals, including sheep.

“If we’re correct, what farmers currently assume are dingoes killing their stock, are likely to be feral wild dogs,” Ballard said. 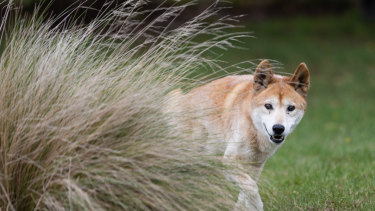 Dingoes are believed to have been in Australia for about 5000 to 8500 years. Credit:Jason South

Studying dogs reveals much about the prehistoric movement of humans, the development of human cultures and the processes of domestication. Dingoes have a unique lineage within canine history, as they have been geographically isolated from wolves and domestic dogs for thousands of years.

It is thought dingoes arrived in Australia about 5000 to 8500 years ago, and have been the continent’s apex predator since the extinction of the thylacine.

Ballard said sequencing dingo DNA was a way to test Charles Darwin’s theory that there are two steps to the process of domestication: unconscious selection, as a result of non-intentional human influences, and artificial selection, through deliberate human activities such as breeding.

Sequencing Sandy’s DNA will allow scientists to examine the changes in genes associated with the process of domestication, he said.

There are two types of dingoes in Australia. Alpine dingoes live on Great Dividing Range and to the east of it, while desert dingoes live to the west of the range. The genome of the alpine dingo is being mapped.

This five-year genome research project became possible when Sandy won the World’s Most Interesting Genome competition in 2017, which was decided by public vote.

The Pacific Biosciences SMRT Grant provided cutting-edge sequencing of the complete genome of a particularly fascinating plant or animal. The other finalists were a temple pit viper snake, a sea slug, an explosive bombardier beetle, and a pink pigeon.

The five-year study was undertaken by a research consortium of experts in microbiology, computational biology and veterinary science, from institutions across six countries, including Australia, Denmark and Norway.

A guide to the environment, what’s happening to it, what’s being done about it and what it means for the future. Sign up to our fortnightly Environment newsletter here.