This is the shocking moment a woman has her head stamped on by a female attacker during a brawl outside a McDonald’s.

The group of girls can be seen shoving, hitting, and grabbing at each others hair in the short 15 second video. 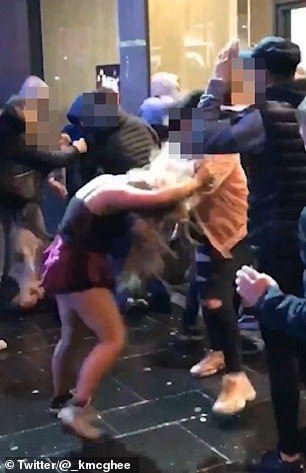 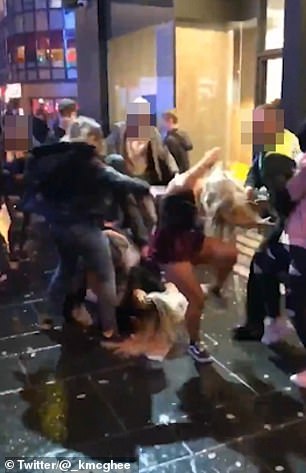 A few young men and a security guard try to break up the scrap but the girl’s keep on lashing out at each other.

One girl, with blonde hair, is thrown to the floor by another woman holding her hair while another person appears to grab onto her legs.

The woman in blue jeans and a black leather jacket who had pulled her hair then stamps on the girl’s head four times before walking off.

The security guard puts his arms out to try and quell the brawl as the girl on the floor appears to try and get back up.

Several people standing around the incident look shocked and one man starts to walk over to the girl on the floor before the short video ends. 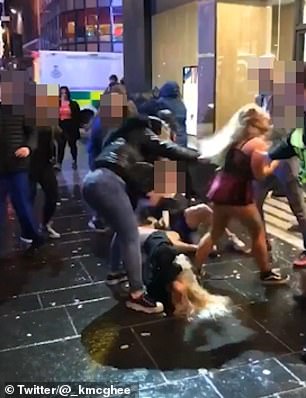 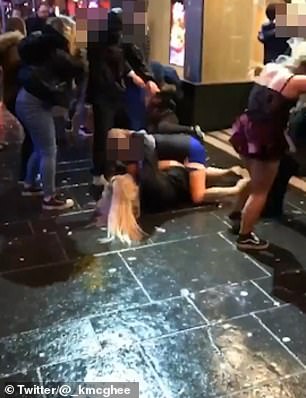 The clip has been viewed more than 182,000 times on social media and hundreds of people have commented.

One person said: ‘Wow that girl stamping on the head….unreal.’

While another said: ‘What the f*** is going on in this country.’

A spokesman for McDonald’s press office told MailOnline : ‘We can confirm that an incident took place on the street outside of our restaurant.

‘Our restaurant team will do everything that they can to support the police if any enquiries are made in relation to this matter’.

Police Scotland confirmed they went to McDonald’s just after 9.35pm but said no arrests were made.

UK weather forecast: Britain to bask in 26C mini-heatwave as rain to lash down from Storm Edouard