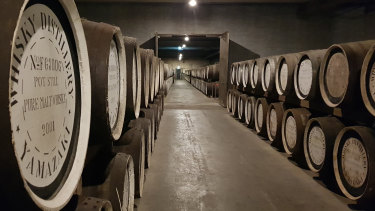 The barrel ageing room of the Suntory’s Yamazaki Distillery in the Kyoto prefecture, Japan, in December 2019.Credit:Chris Zappone

So it was on a blustery day at the far end of Kyoto prefecture in Japan, on a visit to the Yamazaki Distillery.

After waiting for the Hello Kitty-liveried regional train to pass, we pulled into the property. I’d been to a few wine and whisky tastings before. My interest in Yamazaki was as much professional as thirst-related.

Inside the distillery, we were greeted by a Ms Watanabe wearing an unwavering, and yet unwaveringly genuine smile.

She led us from the lobby, to the mash house to the fermentation room. Each hall had a different character: yeasty smells, warmth from the boilers here, the polish of the old tanks there. 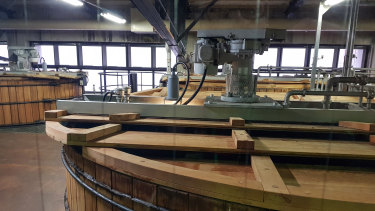 The fermentation room at the Yamazaki Distillery.Credit:Chris Zappone

The secret of the Japanese whisky’s success is the meticulous attention to detail but also the quality of the water. In fact, part of the flavour is linked to the deep complexity that is attributed to the water.

As a bevy of awards and a growing demand shows, Japanese whisky has been deemed a globally recognised success. It often bests whisky from Scotland and further afar.

Now for the professional part: Japan’s mastery of whiskymaking is a proxy for that unique Japanese ability to imitate and then exceed the quality of goods adopted from abroad: automobiles, violins, recording equipment.

The fidelity of production owes thanks to Masataka Taketsuru, the father of Japanese whisky, who brought detailed recipes back from Scotland in the 1920s, and initially worked for what became Suntory, before going off to start his own  Nikka Distillery. 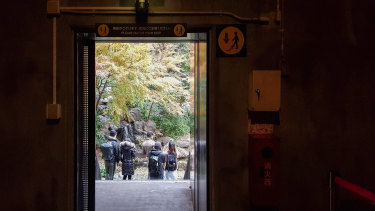 Bottling a place: outside the barrel ageing room at Suntory’s Yamazaki Distillery.Credit:Chris Zappone

Suntory’s rise tracks Japan’s trajectory as a nation still adopting and mastering outside crafts and businesses.

First in 1923, when Shinjirō Torii built the distillery, Japan’s first, then again in 1963 when the company ditched its old name, Kotobukiya, for Suntory, a remix of founder’s Torii’s surname with the Japanese honorific suffix-san. But reversed from Torii-san, to Suntory. 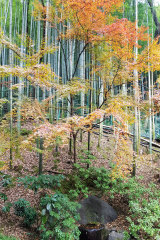 A walk in the woods.Credit:Chris Zappone

Or at least that’s what some Japanese people believe.

The distillery’s own explanation is that the “Sun” refers to the “red circle” label of an early whisky.

In any case, it occurred just as Japan was about to host the Olympics in 1964. Twenty years later, during the go-go years of Japan’s economic boom, Suntory launched its Single Malt Yamazaki – which by the early 2000s launched into the international drinks award circuits, paving the way for its rivals.

Ms Watanabe’s tour takes us to the ageing room where rows of American white oak and Japanese oak casks dating  to 1979 line the walls. The sweet musty smell, a combination of the alcohol and the quality of the wood containing it, we’re told, creates for some "a relaxing feeling of a walk in the woods”.

At the back end of the cavernous ageing room, a door stood open. We were gestured in the direction, and outside, a silent explosion of autumn colours in the woods await. 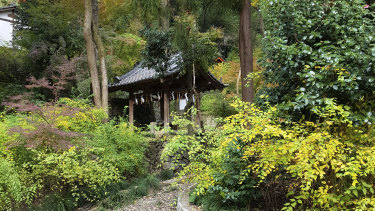 A small Shinto temple on the grounds of the Yamazaki Distillery, owned by Suntory.Credit:Chris Zappone

The leaves of Japanese Maples – yellows, oranges and pinks – skitter in front of the green bamboo further up the hill. If whisky is about bottling the place, one would like to bottle the harmony of this environment.

After a flurry of snaps and the poses of one and two people on the tour, we go to the sampling room, and are offered detailed instructions on the mastery and enjoyment of the Yamazaki whisky.

This is how how all distillery tours end.

But before we step back inside, Ms Watanabe points out, just up the road, a final reminder of the uniqueness of Japan’s whisky: nestled comfortably in the woods, on the very grounds of the distillery, sits a small Shinto temple.

Chris Zappone travelled to Japan as a guest of the Japanese government.

Missing schoolboy, 13, found after vanishing from his home in Dudley this morning – The Sun