Incredible images reveal how worshipers handled poisonous snakes in a ritual to prove their faith at a Christian church in the United States in 1948.

Men hold snakes on their head, show them to a child and hold their hands and arms over fire at the Church of God in Pine Mountain, Georgia,

Snake handling as a religious right in the United States is still observed in a small number of isolated churches.

The practice began in the early 20th century in Appalachia and plays only a small part in the church service. Participants are Holiness, Pentecostals, Charismatics and other evangelicals.

Many writers say George Went Hensley (1880-1955) invented Appalachian religious snake handling and popularized it, but his role in initiating the practice has been disputed by academic studies.

Snake handling as a test or demonstration of faith became popular wherever Hensley travelled and preached in the small towns of Tennessee, Kentucky, the Carolinas, Virginia, Ohio, and Indiana.

In July 1955, Hensley died following a snakebite received during a service he was conducting in Altha, Florida. 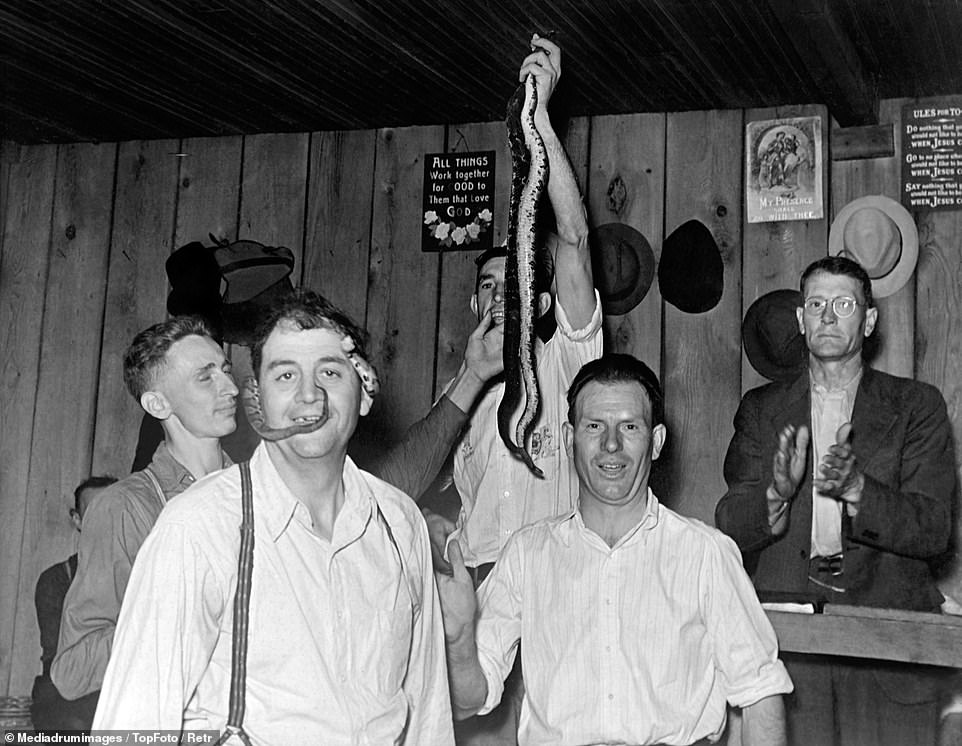 A group of men holding snakes in the congregation at the Church of God in Pine Mountain, Georgia during one of the bizarre meetings. Snake handling as a religious rite in the United States, also called serpent handling, is still observed in a small number of isolated churches 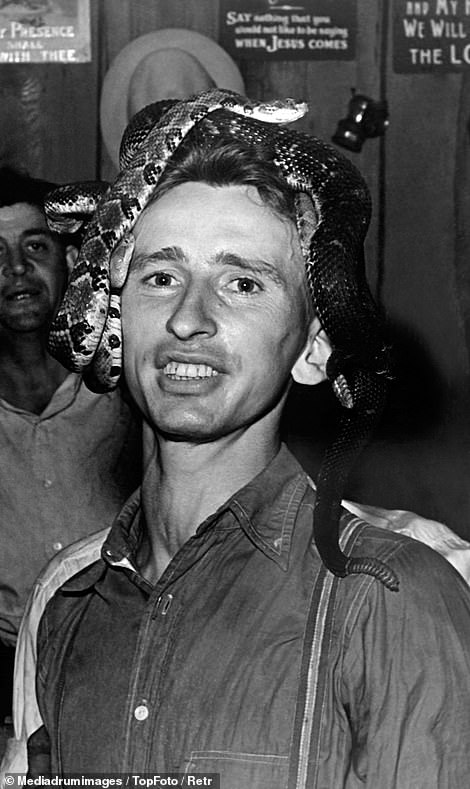 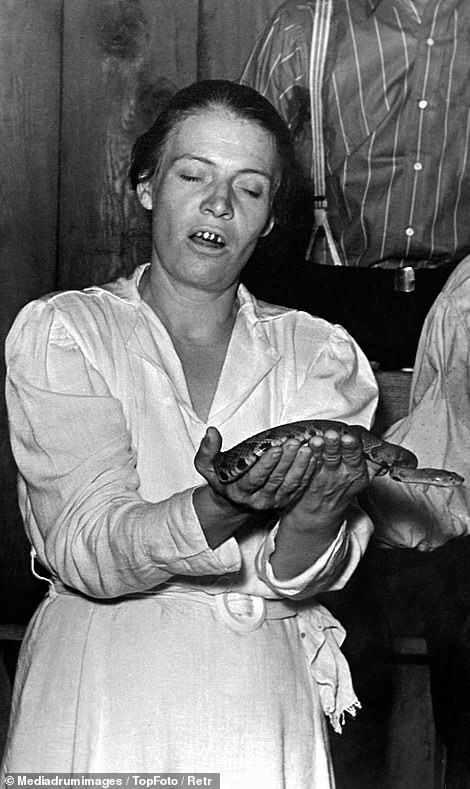 Most religious snake handlers are still found in the Appalachian Mountains and other parts of the southeastern United States, especially in Alabama, Mississippi, Georgia, Kentucky, North Carolina, Tennessee, West Virginia, and South Carolina. Pictured: A male and a female worshipper get too close for comfort to the reptiles during one of the services 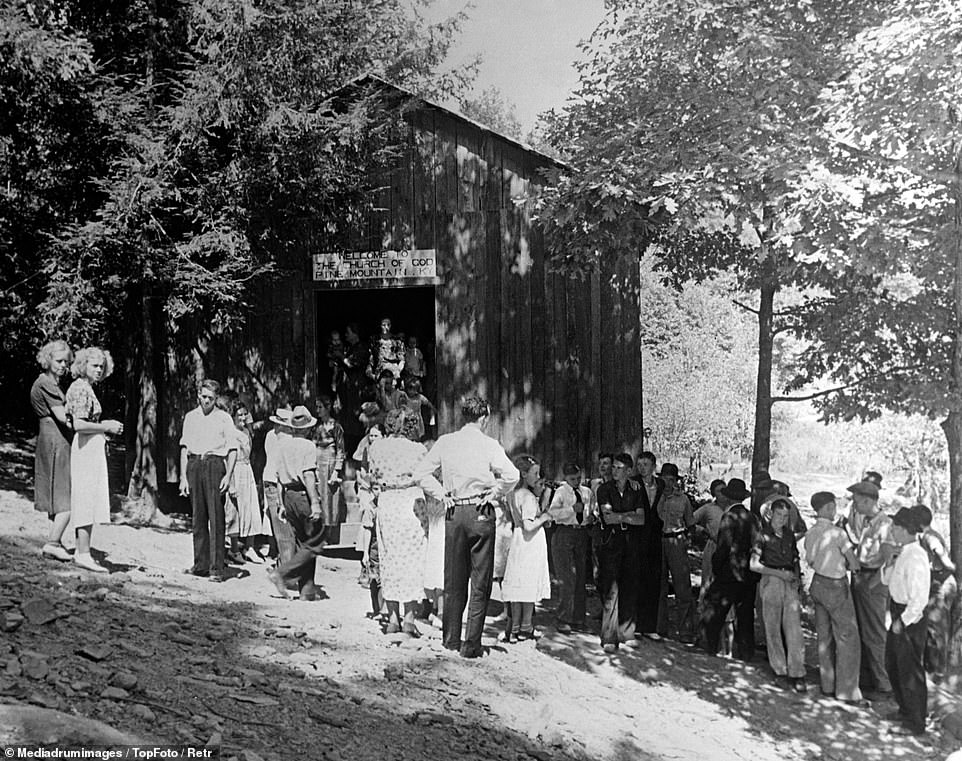 In 2001, about 40 small churches practiced snake handling, most of them considered to be either Holiness, Pentecostals, or Charismatics. 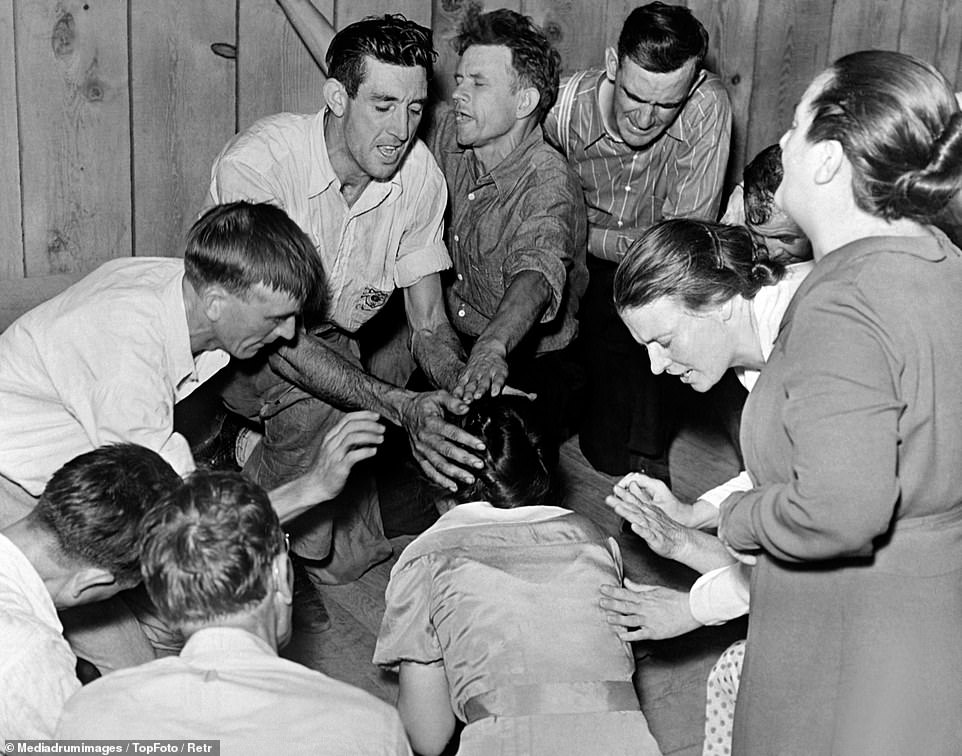 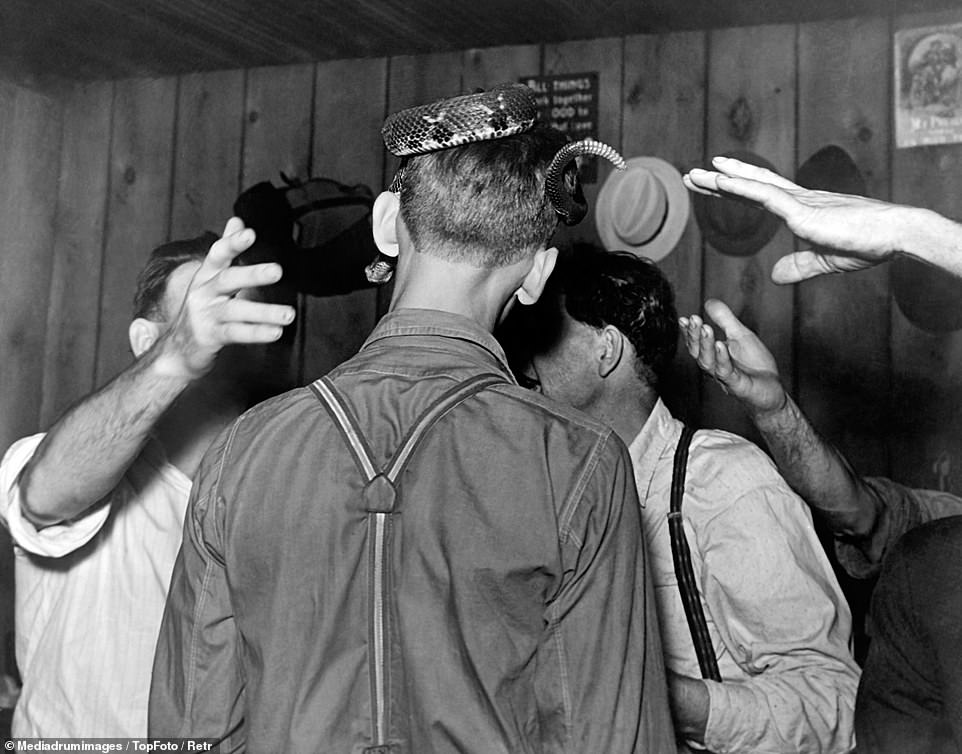 Snake handlers do not worship snakes, instead using the snakes to show non-Christians that God protects them from harm. 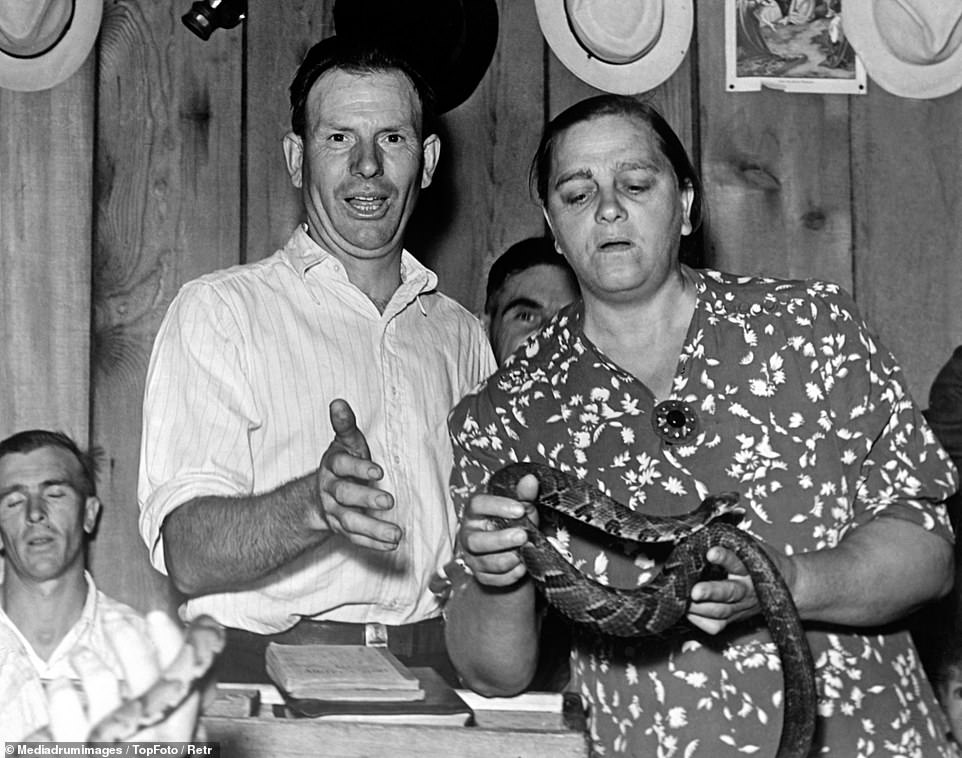 In church services, when they feel the anointing of the Holy Spirit come upon them, these Christians reach into boxes, pick up venomous snakes and hold them up as they pray, sing, and dance 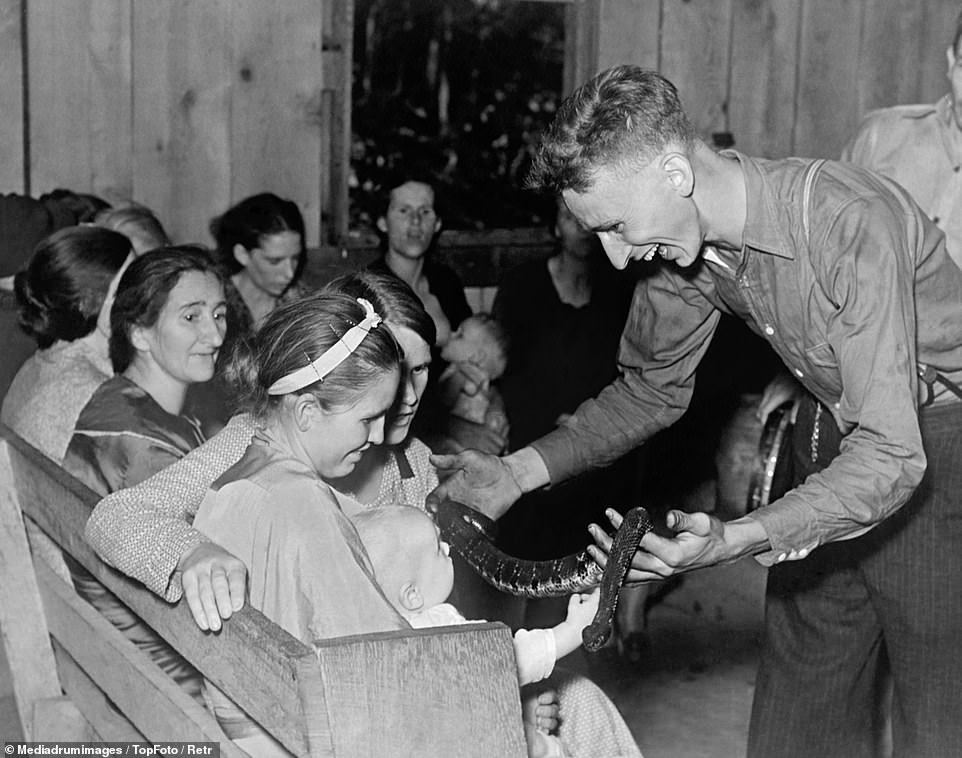 Snake handling was made a felony punishable by death under Georgia law in 1941, following the death of a seven-year-old from a rattlesnake bite. However, the punishment was so severe that juries would refuse to convict, and the law was repealed in 1968 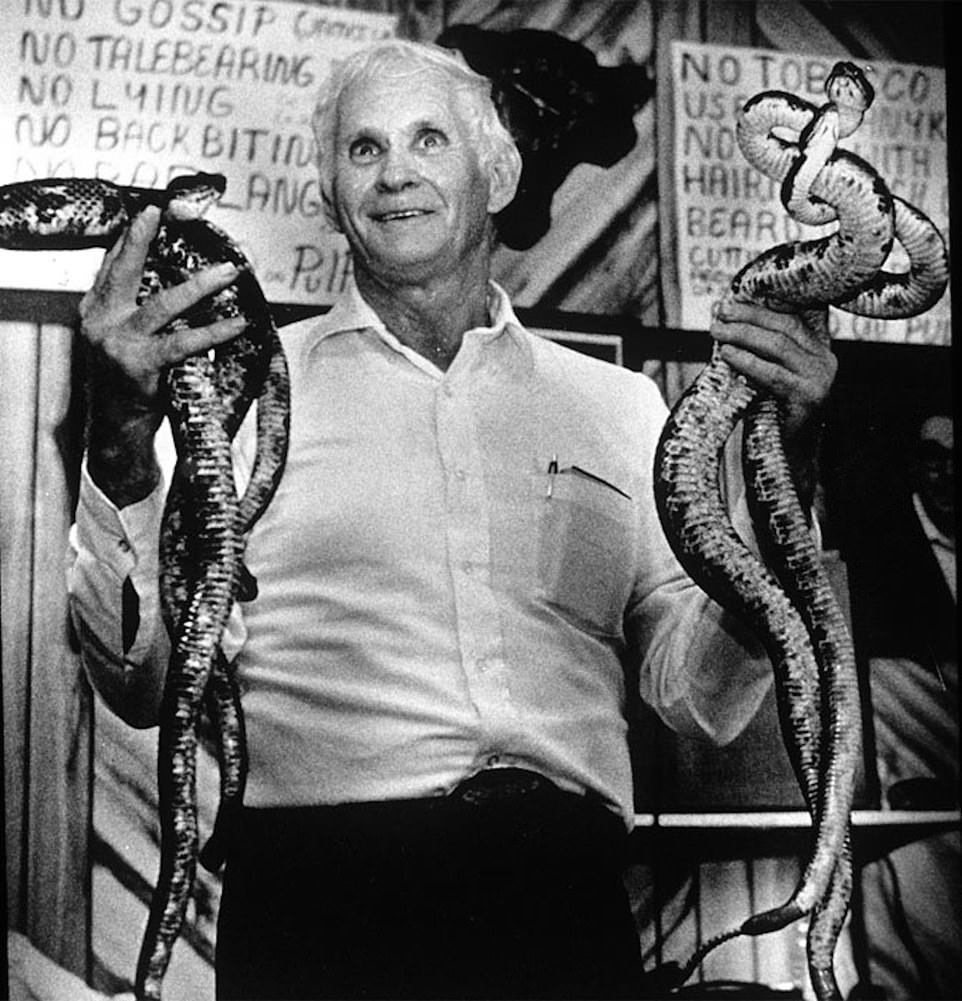 Many writers have attempted to designate George Went Hensley (pictured during one of the rituals) as both the progenitor and popularizer of Appalachian religious snake handling, but his role in initiating the practice has been disputed by academic studies 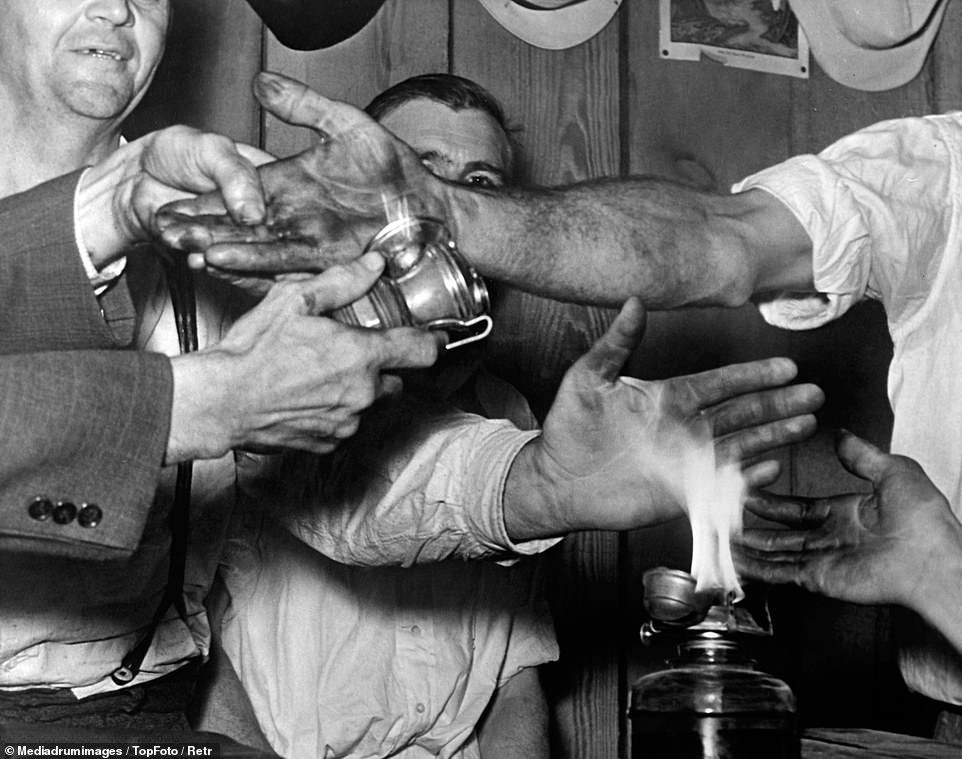 Men wave their hands over fire during a ceremony, covering their arms and fingers in soot from the flame beneath. At its height the practice attracted hundreds of adherents across the US 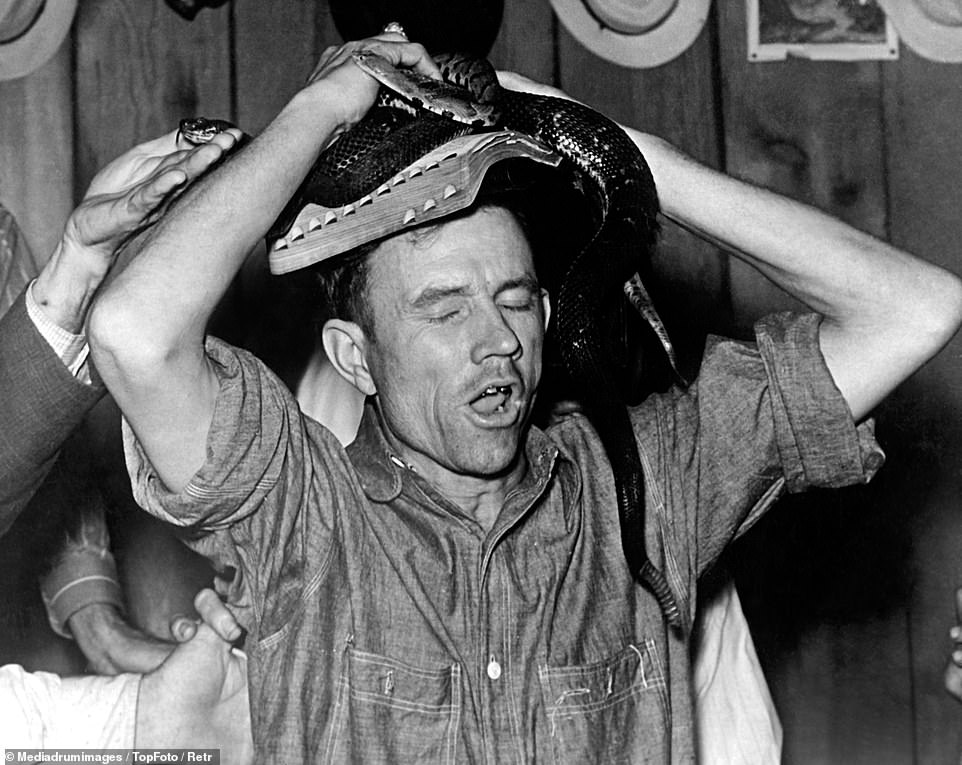 Followers of the snake handling element of the sect would reportedly only take the rattlesnakes into their hands when they could feel the presence of the Holy Sprit as they were praying within the confines of the church.

Couple stranded with pug told to leave it behind