Singapore: In a lab in China’s north-eastern province of Jilin, on the border with North Korea, Chinese scientists at Changsheng Biotechnology were working on a vaccine for diphtheria, whooping cough (pertussis) and tetanus.

It was the summer of 2018, and China’s nascent vaccine industry had been galloping along since it had received World Health Organisation approval almost a decade earlier.

But surging demand had pushed Changsheng to cut corners. The Chinese government had made the combination vaccine – known as a DPT – compulsory for infants. An ex-employee tipped off regulators that the company was using expired vaccines to cut costs and meet demand. More than 250,000 of the vaccines were found not to work. 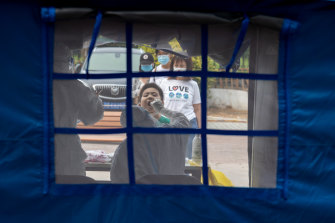 Worse, an investigation by China’s Food and Drug Administration found it had also been fabricating production and inspection data for the rabies vaccine as far back as 2014. The company’s billionaire chair, Gao Junfung, was arrested along with 13 employees and Changsheng was fined $1.8 billion, but the long-term damage to China’s vaccine confidence was much more significant.

The scandal engulfed China’s $180 billion drug industry. Its reputation was already damaged by the discovery that baby milk formula was tainted with melamine. The timing could not have been worse. A year later, the coronavirus pandemic would hit, cementing doubts about big pharma in a country with a long history of traditional medicine.

Today China, the country where COVID-19 was first detected, still has more than 90 million people aged over 60 who are under-vaccinated, defined as having had fewer than three shots. This has condemned its cities and businesses to a cycle of testing and lockdowns from which it shows few signs of escaping.

“There is an urgent need to speed up the vaccination process of the elderly in the country,” Hou Zhiyuan, a professor at Fudan University’s School of Public Health warned last week.

Shanghai and Beijing have been in and out of lockdown for months, the Chinese economy is sputtering, urban unemployment for those aged between 18 and 26 has reached more than 18 per cent, and supply chain breakdowns have exacerbated global economic woes.

Chinese Premier Li Keqiang said in May that the “current employment trends in China are complex and severe”. “It is now more of a priority than ever,” he said.

As the rest of the world moves on from COVID-19, China is cancelling international events scheduled for this year and next, including the Shanghai International Film Festival in June, the United Nations summit on biodiversity in December and the 2023 Asian football cup.

Alfred Wu, a professor at the Lee Kuan Yew School of Public Policy, says many in China “anticipated that this year would be the year the door would open”.

“But now they aren’t seeing any signs of that,” he says. “It has fundamental implications for the whole world.”

China has achieved a remarkable 90 per cent vaccine coverage out of a population of 1.4 billion and limited total official deaths to less than 6000 people. But a core group of residents simply refuse to get vaccinated. Officials worry they are holding parts of its economy hostage because of their sheer number. Despite public pleas, Hou said the number who have been convinced to get jabs has only grown by an average of 0.7 percentage points per month. 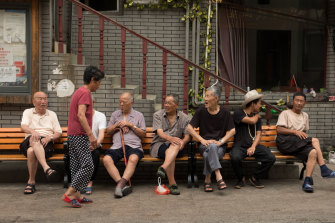 There are more than 90 million Chinese citizens aged over 60 who are undervaccinated. Credit:Sanghee Liu

“Once we miss the [summer] window period, winter will become the peak period of the epidemic,” he said last week. “[We need] to take advantage of the fresh memory of the current epidemic.”

US researchers from George Washington University analysed 11,000 Weibo messages in 2020 and found the Changsheng Biotechnology saga was still having an influence on social media discussions. Then it transformed into wider doubts about the efficacy of vaccines and the actions of the Chinese government.

“The fractured trust in domestic vaccine development has led many older people, already wary about safety concerns and often with a preference for traditional medicine, to refuse COVID-19 vaccination,” The Lancet medical journal wrote last week.

“Though the low vaccine uptake could be misconstrued as the result of neglect, or even ageism, it instead might reflect the deference for older people ingrained in Chinese culture — in accordance with which, older people are afforded the autonomy to make decisions about their health.”

Other factors are at play. China’s thresholds for pre-existing medical conditions that prevent vaccination are set at a much lower level than in the West. In Australia, patients with high blood pressure are encouraged to get vaccinated. In many parts of China – a country that has chronically high levels of blood pressure among its elderly – patients must have a blood pressure lower than 160/100mmHg before they can receive the vaccine.

“This hesitance was, in some cases, shared by physicians who advised older patients with chronic conditions against vaccination,” The Lancet said.

Doctors have reported being reluctant to give vaccines to patients with co-morbidities, out of fear they could become a case study in adverse reaction. At the same time, the government has not imposed mandates because that could trigger instability if medical issues arise. China has only authorised home-grown vaccines Sinopharm and Sinovac to be administered to its population.

Those fears have been exacerbated by a lack of urgency among the elderly.

“Many elderly people think that they have a small circle of activities,” Hou said last week. “Coupled with the effective control of the epidemic in China, they think that the risk of contracting the COVID virus is very low, they do not realise the importance of the COVID vaccination, and they are not willing to be vaccinated.”

In Beijing, Dr Han, a retired surgeon, says she does not see the need to get vaccinated.

“I buy most food such as rice and cooking oil from online platforms so that they can be delivered door-to-door,” says the 80-year-old, who asked only to be identified by her last name to protect her medical history.

”I used to be a doctor and I know what quarantine and sterility are. When a courier arrives, I get myself armoured by putting on my coat, hat, mask and glasses.

“I don’t want to and should not get the COVID vaccination jab because I am allergic to many things. I often get a runny nose and sneeze at special smells and dust. I sometimes also get skin irritations.”

Han is unmoved by the international evidence. In China, a vaccine propaganda vacuum has also meant that occasional vaccine impacts such as fever are never officially discussed, leaving residents to assume the government is lying when friends and family come down with side effects.

She says the elderly in China should have the right to choose whether they are vaccinated or not, “as long as one can take good care of themselves and bring no harm to other people”.

“It’s like euthanasia, when one doesn’t want to suffer from pains anymore and spend a fortune on ineffective treatment, they should have the right to choose,” she says. “Also, I feel my physical condition is not good enough to get a vaccine. What if I pass away after getting a jab?”

Han’s concerns point to a profound problem for Chinese health authorities. They have been mostly unable to convince many in this sceptical group to get vaccinated, leaving its economy vulnerable to new outbreaks while inflicting other consequences on younger residents.

“Though successful in thwarting further outbreaks, these stringent zero-COVID restrictions have further destabilised the local economy, disrupting supply chains and shaking global markets,” The Lancet said last week. “In light of these severe consequences, the benefits and sustainability of the lockdowns must be challenged.”

Wu argues China’s huge PCR testing facilities, designed to administer millions of tests per day, have also created a perverse incentive for local officials to maintain an emphasis on testing over vaccination.

“It’s a paid job. It is a vested interest. Instead of doing vaccination, which you can only do every three or six months. It is not the cash flow they want.”

Exasperated higher-level health officials are compelled to come up with more creative ways to get jabs into the arms of seniors. 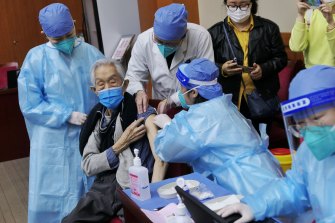 Many health services have offered cash incentives to the elderly to get vaccinated. Credit:Getty

In Beijing’s Chongwenmen district, health authorities are giving out shopping coupons, ice rink tickets, dried fruit boxes, haircuts and pedicures. In Chaoyang district, they are giving out cooking oil and dental cleaning services. In Kunshan’s high-tech zone there are smartphones up for grabs. All of them come with medical insurance for those worried about side effects.

Jin Jinshu, a retired teacher who lives with her son in Beijing, says she was convinced by her neighbourhood managers and an incentive scheme to get vaccinated.

“I had cardiac surgery a few years ago, so was not intending to get vaccinated,” she says. “But my neighbourhood managers persuaded me by saying all the elders above 70 years old got vaccinated and they have seen no side effects. So I got two jabs recently and a third shot half a year later in December. I was given RMB100 ($21) in cash at the vaccination station and won another RMB100 from a lucky draw on site. I heard some got RMB300 ($64) in total.”

Other regional authorities are resorting to more drastic measures to get the elderly into the vaccine queue.

Reuters reported in March that teachers in Guangdong province were being ordered by their school to find four unvaccinated people aged over 60 and convince them to get vaccinated, forcing some teachers to bribe elderly residents to take the shot.

Locals are getting frustrated, not just with those who refuse to get vaccinated but with an endless cycle of lockdowns for which there appears to be no end date.

“It’s all about Xi Jinping’s third term,” says Wu. “He doesn’t want any new event which could jeopardise his transition.”

Xi is up for re-election as China’s president at the Chinese Communist Party’s National Congress in the second half of this year. The event, expected to be held in November, will cement Xi as China’s most powerful leader since Mao Zedong.

“A new COVID policy could lead to unforeseen consequences,” says Wu. “I don’t think he has the courage to do that.”

That leaves 1.3 billion vaccinated Chinese people in an aggressive cycle of COVID suppression in a country where political stability is more important than economic growth.

“My own worry is not young folk – young folk don’t know anything else – the biggest concern is the middle class. Many of the middle class grew up in the 1990s and they knew some sort of freedom and civil rights. They are now in their 40s and 50s and are quite frustrated,” says Wu.

“But they are in China, so what you can do? The only way is to leave the country.”