Those who knew Logan Mwangi describe him as a polite, kind and caring boy who was a ‘joy to be around’.

No one used those words to describe John Cole.

Thrown out of home by his mother as a teenager, he took his revenge by sealing her locks with superglue.

Standing 6ft 4in tall, the bald thug revelled in the threatening shadow he cast, boasting of his criminal past and embellishing his persona with bogus tales of military service in the SAS.

Former partners recalled his racist outbursts and alleged links to the far-Right National Front, as well as the violence they suffered at his hands. 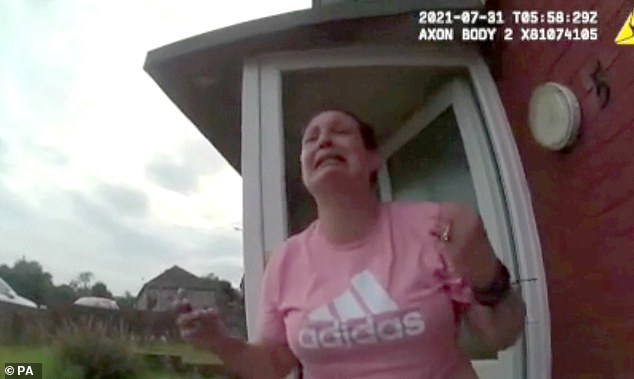 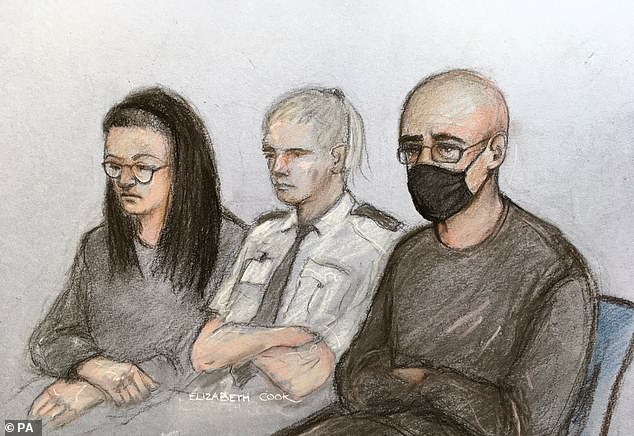 Logan, who weighed just three stone when he was murdered, never stood a chance.

In the months after Cole, 40, started dating his mother, Angharad Williamson, 31, he bullied Logan remorselessly, and would use the racial slur ‘Coco Pop’ to mock the boy, who was mixed-race.

Once, a friend arrived at the family’s home in Bridgend to find the distressed boy, then three, holding a press-up position. Logan’s arms were shaking and he was crying. When he collapsed to the floor, Cole ordered him to start again.

Another time, Cole punished Logan for misbehaving by making him eat Weetabix while everyone enjoyed a KFC takeaway.

Logan lost weight, his skin dulled and his stammer worsened. Where were those who were meant to protect him? 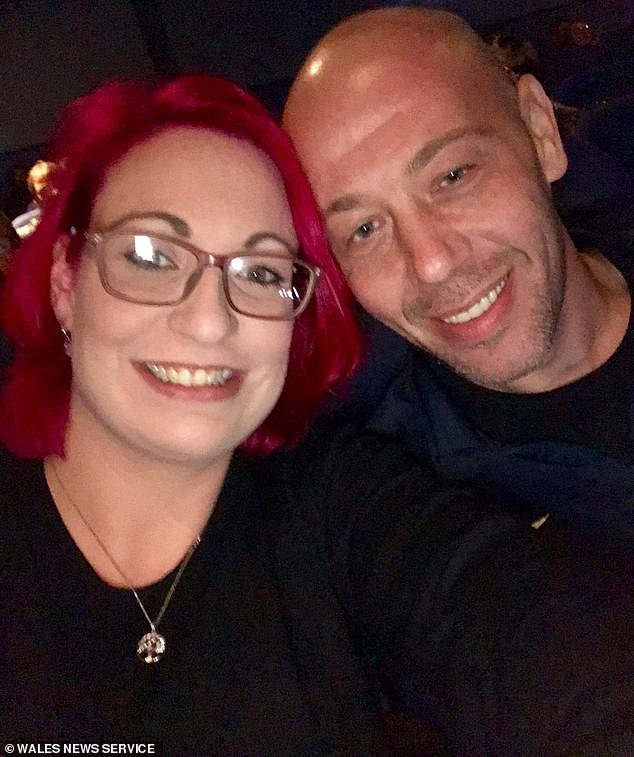 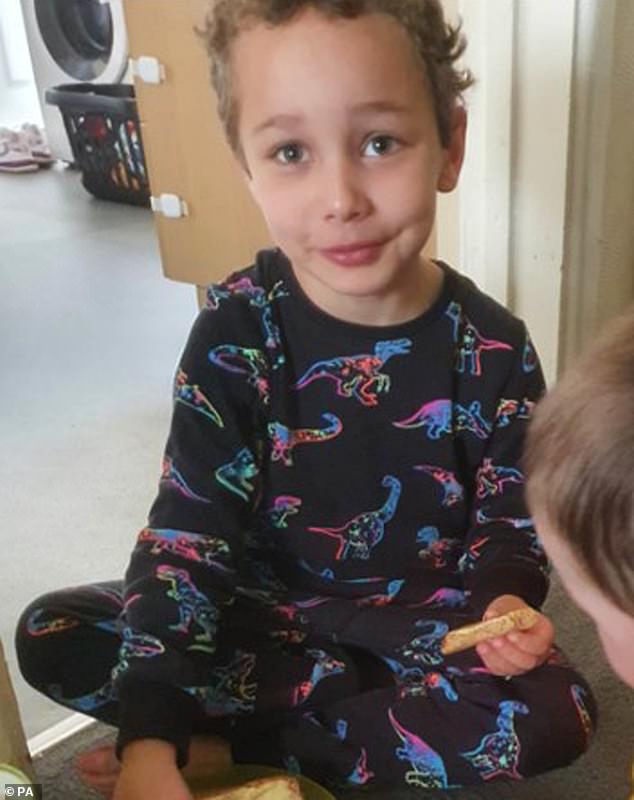 Williamson joined in the bullying – slapping, screaming at her child and verbally abusing him.

Social workers meanwhile claim to never have spotted anything out of the ordinary.

One home visit took place the day before Logan’s body was found.

But the social worker never saw him after being told he was isolating with Covid.

Added into that toxic mix was the teenager, now 14, who cannot be named for legal reasons, convicted of murder alongside Cole and Williamson yesterday.

His upbringing could hardly raise more red flags. In and out of care, he tortured and attacked animals and other children and had an unhealthy interest in martial arts. He had expressed a desire to ‘kill’ Logan.

The trio could not have failed to spot that Logan’s injuries were serious. A tear in his bowel and liver would have caused blood to flood into his abdominal cavity, leaving him in agony.

Instead of summoning an ambulance, Williamson’s first call was to the police to claim her son had gone missing – knowing that hours earlier Cole had disposed of his body.

Williamson, born in east London, was raised in comfort in a four-bed detached home in Brentwood, Essex. 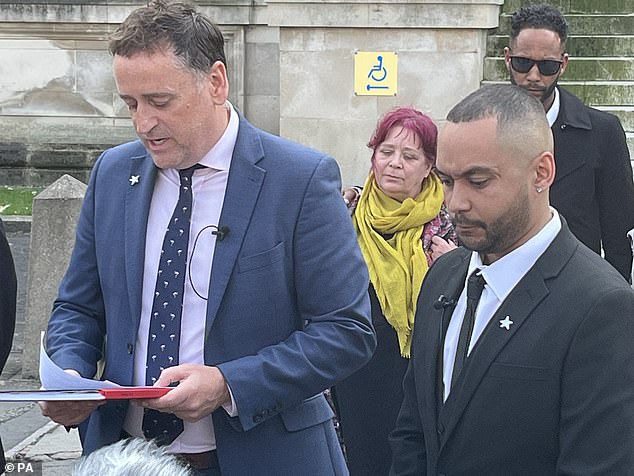 While her parents Eric, a stockbroker, and Clare, a finance worker, split when she was three, neighbours recall a happy, stable upbringing.

March 15: Logan is born in the Princess of Wales Hospital, Bridgend, to Angharad Williamson and Benjamin Mwangi. Their relationship quickly breaks down and Mr Mwangi moves back to Brentwood, Essex.

June: Mr Mwangi visits Logan in Bridgend for their first father’s day together and they have regular contact. Williamson and Logan move in with Mr Mwangi in Essex but by August have returned to Wales.

By the end of the year, Williamson had married another man, but the relationship became violent. During this time, contact between Logan and his father ceases.

Contact between Logan and his father resumes. In April, Williamson takes Logan to visit Mr Mwangi and his family in Essex.

This was the last time Mr Mwangi saw Logan, as Williamson was in a relationship with Cole and was preventing access.

August: Police were called to the family home, a year before Logan died, after he suffered a broken arm from apparently falling down stairs. Williamson admits covering up and lying to police about this.

Police were called to the family home, a year before Logan died, after he suffered a broken arm from apparently falling down stairs. Williamson admits covering up and lying to police about this.

January 21: Williamson calls 101 and during the conversation tells the operator the youth defendant had confessed to pushing Logan down the stairs when he fractured his arm.

May: Social services took no action when Logan burned his neck on a hot bath tap. Their investigation relied on photographs of the tap and Logan’s injuries.

July 31: A five-year-old boy is found dead in the River Ogmore near Pandy Park in Bridgend.

August 5: Logan’s stepfather John Cole is charged with murder as the boy’s mother Angharad Williamson and a 13-year-old boy are jointly charged with perverting the course of justice – along with Cole.

August 7: Hundreds of well-wishers release red balloons into the sky at a vigil next to the river bank where Logan was found dead.

September 1: Inquest into Logan’s death hears that the five-year-old could have suffered a ‘violent or unnatural death’.

October 21: Logan’s mother is charged with murder along with the teenager, now 14.

February 4: Angharad Williamson denies murder and causing or allowing the death of a child at Cardiff Crown Court. She has previously pleaded not guilty to perverting the course of justice.

John also appeared in court and denied causing or allowing the death of a child. He had already pleaded not guilty to murder and guilty to perverting the course of justice.

The 14-year-old boy had earlier denied murder and perverting the course of justice.

February 14: The three defendants appear in court to stand trial for the alleged murder of Logan.

February 21: The court hears that Logan suffered 56 catastrophic injuries to his body after he was allegedly beaten to death by his mother, stepfather and a ‘violent’ 14-year-old boy.

Jurors were told that the little boy was murdered after he caught Covid, before Williamson and Cole dumped his body in a river as if they were ‘fly-tipping’ rubbish.

The trio were said to have covered-up the horrific crime in an ‘elaborate charade’ by claiming Logan had gone missing or been kidnapped while in isolation.

Privately educated until age 11, Williamson got 12 GCSEs and an award for excelling in school.

But in 2013, Williamson’s mother sold the house for £450,000 and moved back to south Wales, the place of her birth. Williamson went off the rails, using a credit card she claims her mum had left her to cover the cost of ‘partying’ with friends.

Her mother made a complaint to the police and she was charged with two offences of theft. In 2014 she was sentenced to a community order.

Not long after Williamson began a relationship with Ben Mwangi, a manager at a bookmakers.

She became pregnant with Logan but began to suffer from seizures, and moved to live with her mother.

Mr Mwangi clashed with Williamson’s mother and moved back to Essex.

Much of Logan’s early life was spent at his grandmother’s house. ‘He was the apple of my eye,’ Mrs Williamson senior told the court.

‘He was a very bright child and a joy to be around. He was thirsty to learn and we spent a lot of time playing with him.’ She described her daughter as a ‘fantastic mum’ whom Logan ‘loved to pieces’.

But things changed dramatically after Cole, known to friends and family as Jay, came on the scene in Easter 2019. They slept with each other the first night they met.

Logan was soon stopped from even spending weekends with his granny, whom Cole accused of ‘interfering’.

Born in Rugby, Cole’s father was a taxi driver and late mum a cleaner. ‘He [Cole] was controlling, aggressive and lazy,’ said a family friend.

When his mother died, Cole did not attend her funeral, only returning to pick up a cheque for his share of the estate.

As a young man he racked up a string of convictions including burglary, assault and intimidating a witness.

Further details about Cole’s character emerged during a pre-trial hearing.

This evidence, which can be reported today for the first time, included a girlfriend from 20 years ago claiming he was a member of the National Front.

Another witness said in a statement: ‘John was so racist he would have made that child’s life hell.’ Two former girlfriends also claimed Cole had been violent towards them ‘in a domestic setting’. One was pregnant at the time of the alleged assault.

Then there was the youth, who was 13 at the time of Logan’s murder. In evidence, a former foster mother said she became concerned about his ‘desire for violence’, describing his behaviour as being like a ‘monster’.

She recalled how the youth persuaded her to buy him a metal baseball bat, thinking he wanted to play, but he instead went straight to a local park and began smashing things with it.

A girl in the family recalled him trying to get her young nieces to play a ‘murder game’ and put them in black bags.

The foster family said they raised concerns with his social worker but claimed she dismissed their fears as ‘nonsense’.

Just how Logan died may never be known. In interviews with police, Williamson claimed she had no idea how her son could have suffered the 56 external injuries he was found with, let alone the damage to his liver and stomach.

But she changed her story, claiming that on July 29 of last year, Cole punched Logan three or four times in the stomach and ‘sent him flying’.

She said he then lifted the boy’s T-shirt up to see the bruise and said: ‘That’s a good one.’

She added that Cole had goaded the teenager into joining in the attack.

Cole and the youth denied they had attacked Logan, instead saying the boy had been acting ‘crazily’ before he had died, jumping from furniture and falling over in the bath.

They also accused Williamson of manhandling him.

All maintained that on the evening of July 30, Logan was put to bed as normal. Williamson claimed that when she awoke at 5.30am her son had gone, and that she initially believed he had run away or been abducted prompting her to call police.

Cole, in turn, claimed that he was awoken by Williamson telling him: ‘Logan’s dead, it was a freak accident’ – before carrying the body out to the River Ogmore nearby.

The youth claimed he had accompanied Cole to the river believing he was fly-tipping rubbish.

Just one more lie to go along with all the other lies told about little Logan’s terrifying last days.

GCSE and A-levels 2022: What changes are being made?

OP-ED: With The Future Of Roe On The Line, So Are Black Women’s Lives

Save the knees! Our readers can score $30 off this 'amazing' garden stool and kneeler combo