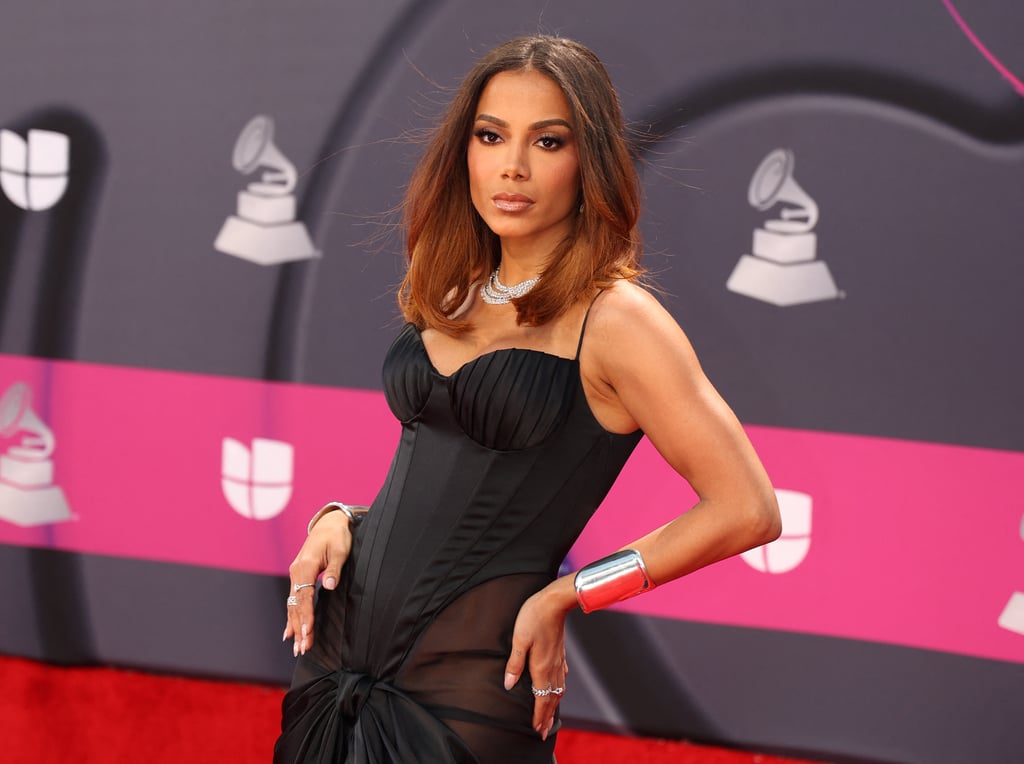 Anitta’s presence at 23rd annual Latin Grammy Awards was breathtaking, to say the least. The 29-year-old Brazilian singer and songwriter arrived on the red carpet in a satin corseted Mônot gown that featured an elegantly pleated bodice, spaghetti straps, and an entirely sheer skirt, broken up only by a strip of fabric that was shaped into a bow and wrapped loosely around her hips, with long ribbons skimming the floor. Styled by Ron Hartleben, she accessorized with multi-strap platform sandals and jewelry from Tiffany & Co., including two chunky silver cuffs, several silver diamond rings, a triple strand choker necklace that lay flat on her chest, and dazzling drop earrings. The performer opted for an on-trend milk-bath manicure, a glossy taupe lip, and smoky eye.

Other notable show attendees were Becky G, who stunned in a multicolored, sequined brushstroke ballgown by Zuhair Murad Couture styled with sheer opera gloves; Rosalía, who posed in her logofied velvet Miu Miu gown, that also boasted mesh sleeves and was dripping with crystals; Clarissa Molina, who showed off a bejeweled thigh strap across her slitted David Koma number; and Christina Aguilera, who made a statement in a plum-toned gown with voluminous sleeves that wrapped around her back, surrounding her like a halo.

Rosalía, Bad Bunny, and Aguilera are among this year’s top nominated musicians, and the Las Vegas event at Mandalay Bay Resort and Casino will also include performances by John Legend, Elvis Costello, Karol G, Marc Anthony, and Rauw Alejandro, who joined beau Rosalía for photos in black suiting and Western-inspired heeled boots.

Ahead, take in every look from the 2022 Latin Grammy Awards red carpet.

I saved hundreds of pounds by building my own garden hot tub shelter – it was really easy, here’s how you can