The Met Office said an area of high pressure is building from the Atlantic and said there is “very little meaningful rain” on the horizon for parched areas of the country. Temperatures in the South and South-west could hover between ­86F and 95F (35C) by the end of ­next week. Steve Willington, Met Office chief forecaster, said: “We could see parts of the UK entering heatwave conditions if the above-average temperatures last for three days or more.

“Many areas of the UK, especially the South, will witness temperatures several degrees higher than average, but these values are likely to be well below the record-breaking temperatures we saw in mid-July.

“As the high pressure builds there is very little meaningful rain in the ­forecast, especially in those areas in the South of England.”

Temperatures there will climb to at least 81F by Sunday. The North is set to be cloudier, ­with highs of around 73F towards the end of the weekend.

At least 17 million could be hit by hosepipe and sprinkler bans in ­the next few weeks amid concerns ­of a lack of significant rainfall.

South East Water and Southern Water have already announced temporary usage bans. It means from August 12 households cannot use hosepipes to water gardens or clean cars while ponds and swimming pools must not be filled.

It is likely that other companies will soon announce similar action to ensure water security. 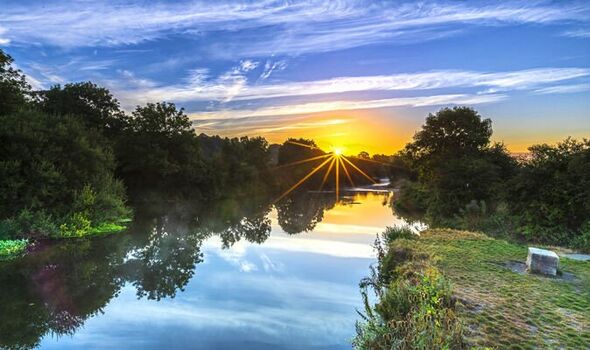 Experts said yesterday that the source of the River Thames had dried up, the first time they had seen this happen. The source has shifted from its start point near Cirencester, Glos, since the start of ­the dry weather and is now ­2.4 miles further downstream.

Campaigners at The Rivers Trust warned a drought, which could be declared this month, would be a “wake-up call to radically change our attitude to water”. July was the UK’s driest since ­1935, with England experiencing just 35 percent of its average rainfall for the month. Britain reached a new record-high temperature of 104.5F at Coningsby, Lincs, ­
on July 19.

Christine Colvin, of The Rivers Trust, said: “We need to start thinking much more ­strategically about how we are going to cope better in the future with ­long-term measures.

“Historically, water companies have relied on being able to withdraw more water from rivers and aquifers in times of drought. But our rivers will die if that ­continues.

“Hosepipe bans are really just the tip of the iceberg in terms of dealing with long-term water scarcity.”

●Marks & Spencer has stopped selling disposable barbecues in all its stores “to help protect open spaces and reduce the risk of fires”.

Adult baby, 22, calls boyfriend ‘daddy’ and gets him to change her nappies