Working up a sweat! James Middleton and Spencer Matthews head out for a jog SHIRTLESS with mystery woman during family getaway in St Barts

The Middletons and the Matthews are currently enjoying a luxury getaway to St Barts but it seems that some family members couldn’t help but squeeze in a work out.

The Duchess of Cambridge’s younger brother James Middleton joined former Made in Chelsea star Spencer Matthews for a jog around the island on Sunday.

Both Spencer, 30, whose brother James is married to Pippa Middleton, and James, 31, opted to go shirtless for their run this morning only sporting a pair of shorts and trainers while showcasing their toned physiques.

They were joined by a female companion for their workout who ran alongside James today. 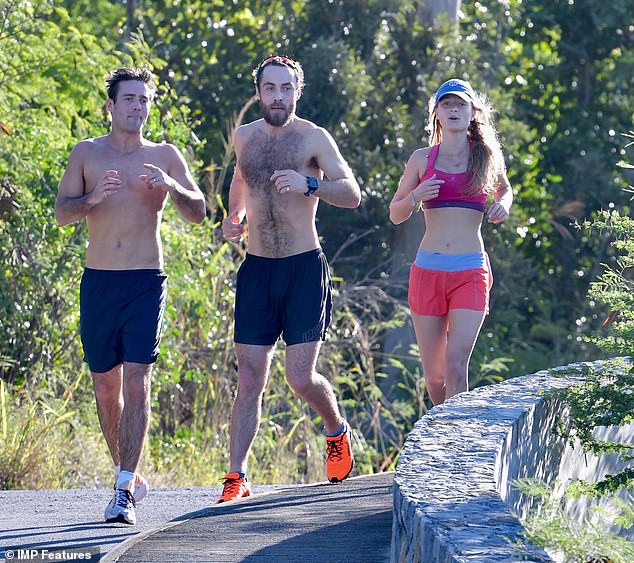 The mystery woman wore a coral pair of shorts and a hot pink crop top as well as a denim baseball cap to keep the Carribean sun off her head.

The two men are currently enjoying a post Christmas break on the Carribean Island where Spencer’s father owns a luxury hotel.

Pippa Middleton, 35, was yesterday spotted soaking up the winter sun while holding her 11-week-old baby Arthur.

Kate’s sister was joined by her husband James Matthews, 43, and his brother, Spencer.

It is believed that Spencer’s wife Vogue Williams is also staying on the island with their three-month old son Theodore. 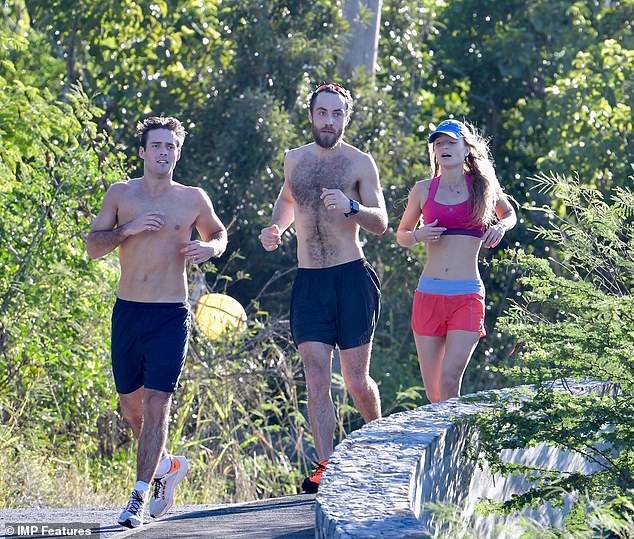 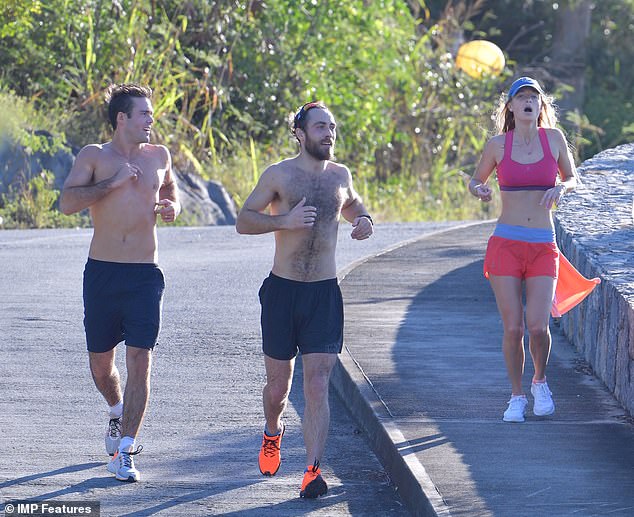 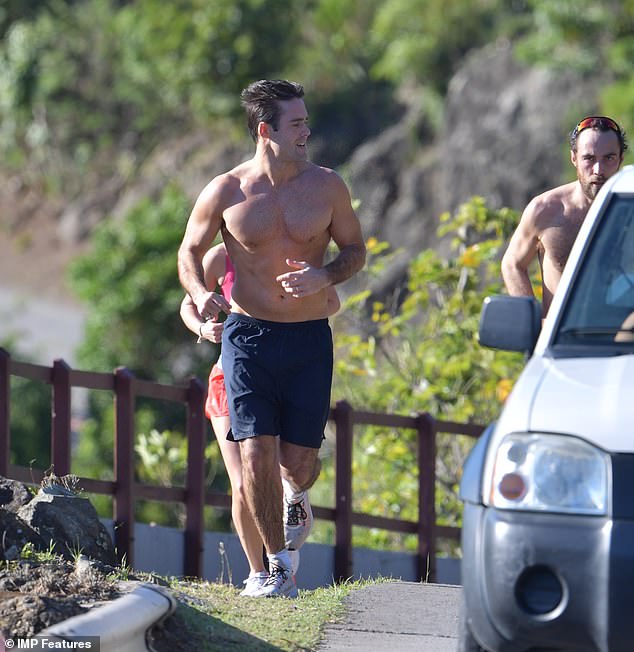 Pippa has previously been seen on the island for winter holidays, including with her brother James Middleton in January 2016.

She married James Matthews in May 2017, and their first child – Arthur Michael William – was born in October this year.

The trip to the Americas comes after the Middleton family enjoyed a casual lunch at a Berkshire pub on Boxing Day.

However they were not joined by Pippa’s sister Kate, who spent Christmas with the rest of the royal family. 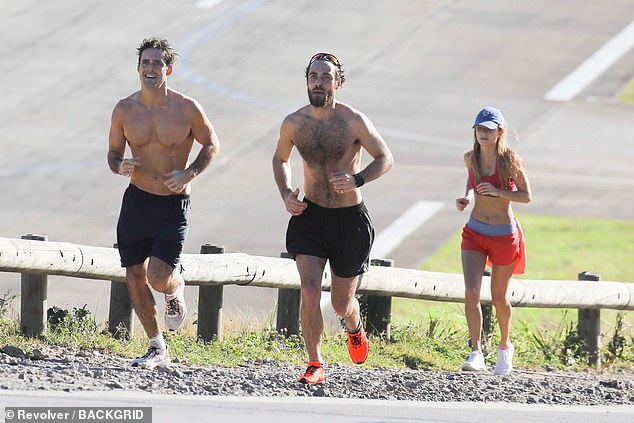 The Matthews family owns the Eden Rock resort on St Barts, one of the region’s most exclusive hotels.

Stars including Elton John, Brad Pitt and Leonardo DiCaprio have stayed at the resort, where suites can cost up to £25,000 a night.

The hotel needed extensive repairs after it was wrecked by the devastating Hurricane Irma in September 2017.

St Barts has long attracted wealthy Europeans including Roman Abramovich, who bought a £49million mansion there and has moored his yacht on its shores. 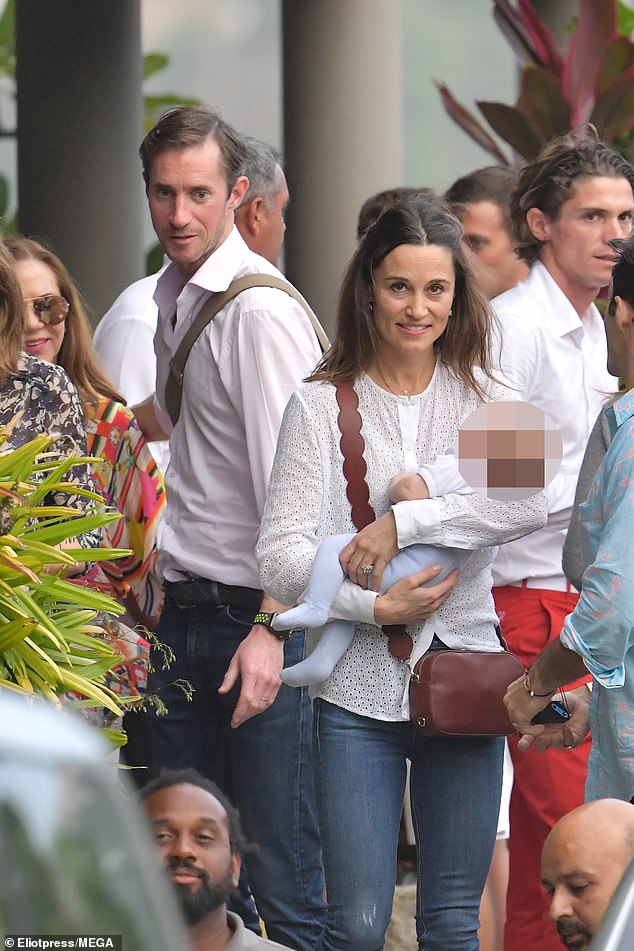 Pippa Middleton, 35, was yesterday spotted soaking up the winter sun while holding her 11-week-old baby Arthur 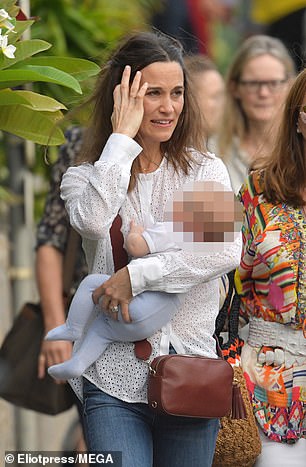 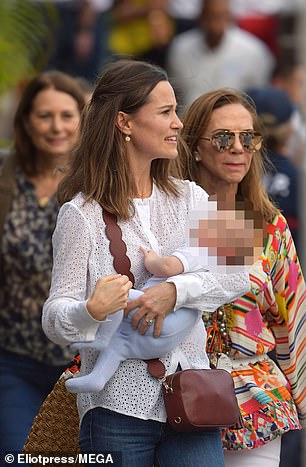 Kate’s sister was joined by her husband James Matthews, 43, as well as his two parents David and Jane (seen with Pippa here)

The Eclipse, which is officially registered in Hamilton, the capital of Bermuda, was delivered to Abramovich in December 2010.

The 76-year-old Beatles star spent the holiday in the Caribbean with his wife Nancy Shevell, 59, and daughter Stella, 47.

Boyfriend started food fight on my birthday – then SNOGGED a gatecrasher

Absentee ballots don’t need to be returned through the mail. Here are other options.

I'm desperate for sex but my husband is never interested