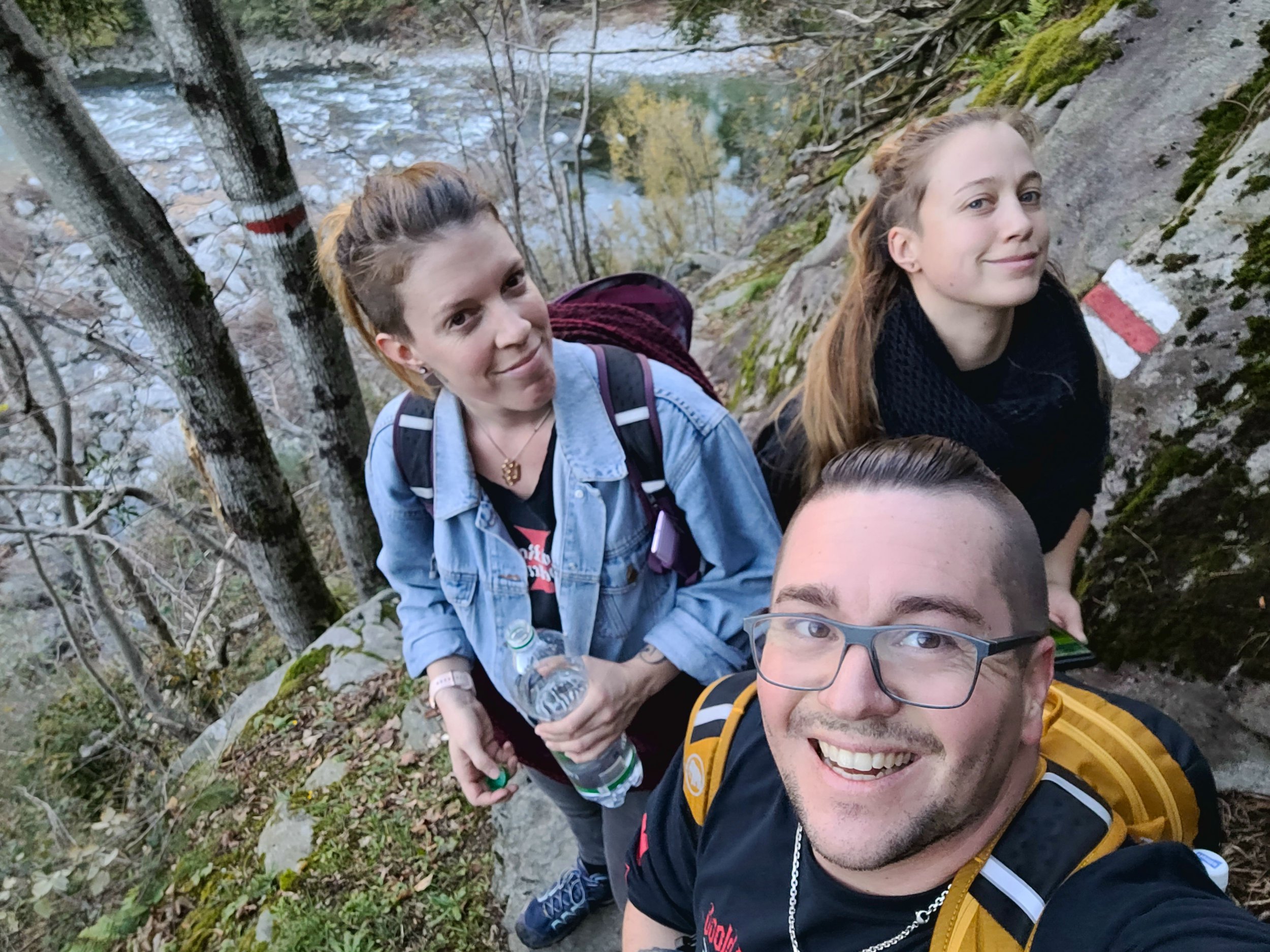 Pharmaceutical worker, Sarah Richter and her husband, real estate manager, Marco, from Switzerland, first met and fell in love in 2009, and were later married in 2017

The same year they met business development employee Mik Nori, 30, after being introduced by mutual friends. Their friendship soon blossomed as they discovered they had a shared passion for music, and they trusted each other almost instantly.

It had never occurred to Mik that there may be something more than friendship between the three, as Sarah and Marco were so in love. Behind the scenes, though, Sarah had admitted to her husband she had a crush on Mik.

Life got in the way of anything progressing, though, as Mik was deployed in the army for a year which kept them apart. It was when she returned in May 2020 that they decided to meet up, and one thing led to another.

‘There was an unusual sympathy and connection that went beyond friendship for the three of us for a rather long time,’ said Mik.

‘It wasn’t until we got physically closer that the idea of this occurred, but once we had passed that point, we abandoned the image of us being “just friends” – it [our feelings] hit us all like a train.“

‘What started as an innocent night out at the bar, quickly escalated to end up in a not-so-innocent all-nighter at Marco and Sarah’s apartment.’

The next day, the three noticed how normal things felt between them (Mik called it ‘weirdly normal’), and their decision to initially keep their relationship purely physical and avoid anyone getting hurt didn’t quite go to plan.

They fell in love, and made their three-way relationship official a few weeks later.

Apart from a few teething problems (as it was all three’s first polyamorous experience) around jealousy, they say communication helped them feel stronger than ever.

‘Being in such a new form of relationship requires oneself to reflect on one’s own behaviour in a way you’re most likely never challenged to in regular monogamous relationships,’ says Mik.

‘Confronting these flaws in a relationship leads to the ability to be absolutely honest and reflective regarding one’s own behaviour allowing everyone to be happy.

‘This process felt like freeing our love from chains, and with our love, ourselves.’

There has still been judgment from some, with detractors suggesting that Sarah and Marco’s marriage must be in trouble if they’d fallen for someone else.

Mik says: ‘Ironically, those who presented themselves as the most open minded, often had the most problems accepting us.

‘There was a lot of talk behind our backs, obviously. There were extremely brutal assumptions about us that could have not been further from the truth. There was drama and we did lose some friends in the process.’

Sarah, Mik, and Marco admit that when they all walk down the street holding hands the stares are uncomfortable, but they will never shy away and continue to hold hands, hug, and kiss in public if they want to and if it’s practical to do so.

They also share their relationship on Instagram, with the aim of showing off just how ‘normal’ a polyamorous relationship can be.

‘We want to show that we do have a normal relationship – not a pornographic fantasy,’ says Mik.

‘We cook together, we’re in home-office, we lay on the couch, we go snowboarding and just want to spread good vibes.’

For those looking to explore ethical non-monogamy, Mik says: ‘Follow your heart and your gut feeling and dare to think outside the patterns you have learned. There is much to win, little to lose.

‘Whether you are in a new or existing relationship, take your own needs and desires seriously, but be fair.

‘Polyamory has all to do with consent and nothing to do with cheating or meeting other people behind someone’s back. It means discussion, asking all the questions and being honest about the answers. It means rooting for each other’s wellbeing on every level and not tying oneself to be someone’s only source of everything.

‘Just be honest to yourself and your surroundings and enjoy the journey.’

Rush Hour Crush – love (well, lust) is all around us

Tell us about your Rush Hour Crush by submitting them here, and you could see your message published on the site.

Cops Revival at Fox Nation to Debut in September

‘It’s our turn’: Inside the Christian Right conference plotting a political takeover

What's in the middle of Lidl this week? Six bargains you can find in shops