Pet lovers are being warned over a ‘dog fishing’ scam after thousands of unsuspecting owners have bought illegally smuggled puppies organised by criminal gangs.

UK charity Dogs Trust has revealed that many owners have been conned or ‘dogfished’ into buying illegal puppies that often have hidden health or behavioural problems, leaving them heartbroken and almost £500 on average out-of-pocket.

The charity went on to say that thousands have fallen victim to illegal puppy smuggling, where the animals are brought into the UK from central and eastern European countries, before being sold on for vast profits.

Many described how sellers falsified paperwork, kept sick dogs locked in a cage away from their mothers and lied about the age and breed of the hound. 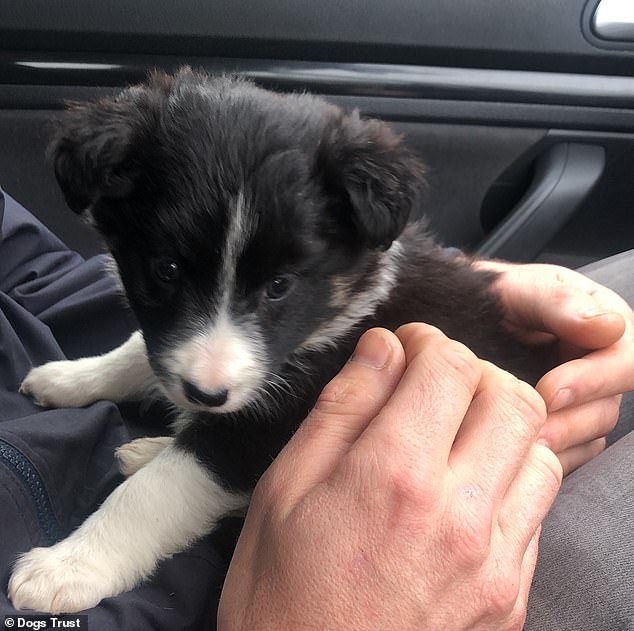 Pet lovers have been warned over a ‘dog fishing’ scam after thousands of unsuspecting owners have bought illegally smuggled puppies organised by criminal gangs. Pictured, Sarah’s dog that sadly had to be put down

Dogs Trust have now launched a campaign to help prevent prospective owners from being misled and are touring the country in a van like those used by puppy smugglers to educate the public on the shocking realities of ‘dog fishing’.

Sarah, 30, from Chichester, was left heartbroken when the puppy she bought after seeing it advertised online, had to be rushed for emergency treatment on Christmas Day.

The puppy, named Evie, had contracted parvo virus, a highly contagious and potentially fatal virus which causes lethargy, vomiting and diarrhoea. Sadly, the puppy had to be put to sleep just two days later.

‘The environment the puppies were in just wasn’t sitting well with us,’ explained Sarah. ‘There were so many things that weren’t right.

‘We just wanted to do our best for her and take her away from there, get her vaccinated and give her a good home.

She continued: ‘When the vet finally called to say she probably wouldn’t last the night, we decided we had to put her to sleep.’

‘We just couldn’t let her suffer any more. It’s just so painful to think about our puppy going through so much pain.’ 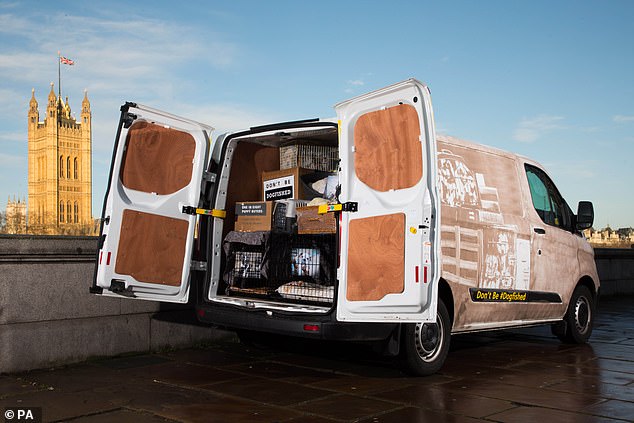 Sarah, who does not wish to use her surname, thought she was buying a healthy dog from a breeder.

‘How could anyone let this happen to something so small? It ruined our Christmas and it has been gut-wrenching every time we have seen another dog out on a walk,’ she said.

‘We did our research and when we responded to the advert, we thought we would be getting a healthy, well-bred dog from a happy home. Now, we have nothing left but a horrible story. We just want to help stop anyone else going through this heartache.’

Dogs Trust surveyed 2000 puppy owners to see how many buyers might have fallen victim to ‘dog fishing’ – after more than 201,300 dogs were advertised online in 2019 on four of the UK’s biggest classified websites. Sarah, 30, from Chichester, who bought puppy Evie (pictured) after seeing her advertised online, was left heartbroken after she had to rush her in for emergency treatment on Christmas Day

A worrying number of buyers who were not allowed to see the puppy at the seller’s home also revealed they were asked to collect their puppy in a car park or lay by – something that no breeder with care for the welfare of the puppies would do.

More than a fifth of puppy buyers said their seller lied to them about things such as the age, breed and whether the dog had been vaccinated and microchipped when they were buying via online adverts.

And more than a quarter told how they had concerns relating to the health or behaviour of their puppy within weeks of buying them.

Worse still, some reported terrible conditions where their puppies were ‘locked in a small cage away from mum’, were so sick they ‘very nearly died’, or were ‘scared of their own shadow and very wary of humans’. 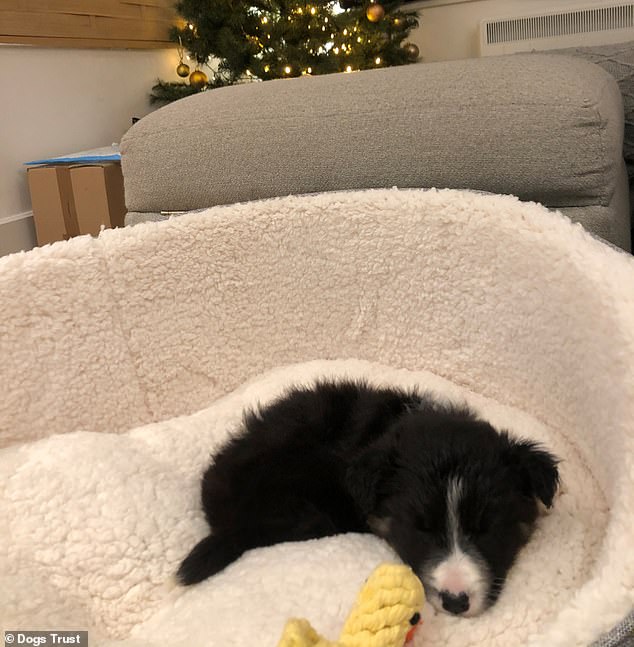 Sarah, who does not wish to use her surname, thought she was buying a healthy dog from a breeder. Pictured, her dog which devastatingly had to be put down

Overall, one in six puppy buyers polled said within their first year their puppy had developed significant health or behaviour problems, such as diarrhoea and anxiety, causing terrible suffering for their beloved pet whilst costing them on average almost £500 in additional vet bills.

Some of those people even said their puppy had either died or had to be put to sleep, due to the severity of their condition.

Paula Boyden, Veterinary Director at Dogs Trust, commented: ‘People think they are getting a healthy, happy puppy but behind the curtain lurks the dark depths of the puppy smuggling trade.

‘Many of these poor puppies suffer significant health conditions or lifelong behavioural challenges, and sadly some don’t survive, leaving their buyers helpless and heartbroken – as well as out of pocket. If it seems too good to be true, as hard as it is, walk away and report it.’ 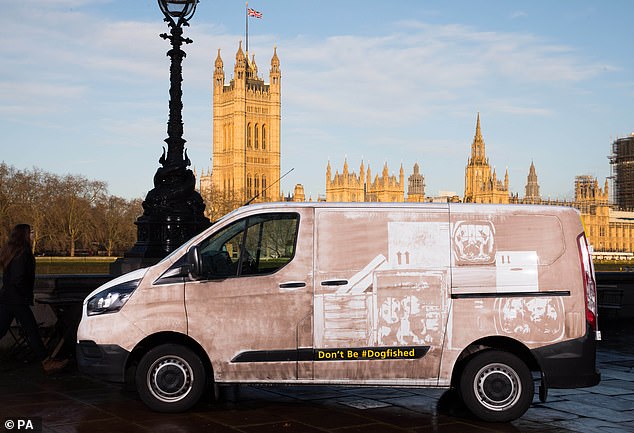 Dogs Trust (pictured) surveyed 2000 puppy owners to see how many buyers might have fallen victim to ‘dog fishing’ – after more than 201,300 dogs were advertised online in 2019

The Best Engagement Ring Style, Based On Your Zodiac Sign