Household budgets were hit with rising costs for childcare, tobacco and medical services during the last three months of 2020 but easing drought conditions reduced vegetable prices and Black Friday sales slashed the price of new clothes.

The consumer price index increased 0.9 per cent in the three months to December, Australian Bureau of Statistics data shows, but there have been both significant cost increases and falls due to government interventions to keep the economy afloat during the coronavirus pandemic. 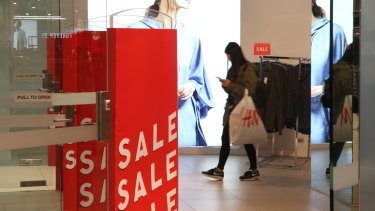 Black Friday sales kept the cost of clothes down at the end of 2020 but childcare and tobacco costs increased significantly.Credit:Louise Kennerley

The annual growth in prices was also 0.9 per cent, well below the Reserve Bank’s target of between 2 and 3 per cent, which economists expect to contribute to sluggish wage growth.

The biggest contributors to price rises over the last three months of the year were childcare and tobacco, both driven by government policies. Childcare jumped 37.7 per cent after the government’s fee-free childcare arrangements introduced during COVID-19 came to an end, while tobacco costs increased 10.9 per cent due to rising taxes.

Domestic holiday travel costs increased 6.3 per cent as state and territory borders reopened after COVID-19 restrictions. Medical and hospital services recorded a 2.5 per cent rise following a jump in private health premiums in October after a six-month freeze. Food and non-alcoholic drinks increased 0.2 per cent, while meals out and takeaway foods were up 1.1 per cent.

However, there was a 5.4 per cent drop in women’s clothes prices over the last three months of 2020 due to retailers jumping onto big promotional events like Black Friday sales. The clothing and footwear category overall declined 1 per cent. Fruit prices increased 3.4 per cent while beef and veal were up 3 per cent but vegetable prices fell 6 per cent over the quarter as drought conditions eased.

Callam Pickering, Asia Pacific economist for Indeed, said high unemployment due to the coronavirus-induced recession, low wages growth and a strong Australian dollar pointed to inflation remaining below the RBA’s target level in the short-term.

“There will be a temporary spike in inflation in the first half of 2021 as the impact of COVID-19 drops out but that should largely be ignored,” Mr Pickering said. “Excluding childcare costs, headline inflation would have increased by just 0.5 per cent in the December quarter and that provides a better indication of overall price pressures.”

The cost of building a new home increased 0.7 per cent over the final three months of the year due to a rise in demand. This was partially offset by the federal government’s $25,000 HomeBuilder grant for new home builders and state-specific grants. This scheme was extended into 2021 but at the lower rate of $15,000.

Household electricity costs fell 7.5 per cent, the biggest decline on record, on the back of a $600 credit in Western Australia.

EY chief economist Jo Masters said the impact of government policy, including the reintroduction of childcare fees and HomeBuilder, was “evident across a number of categories” affecting the overall index. “The uneven nature of the economic recovery is highlighted by the large divergence between inflation for goods versus services,” Ms Masters said.

BIS Oxford Economics chief economist Sarah Hunter said the annual rate of inflation could be pushed above 2 per cent due to distortions from the COVID-19 pandemic and government responses to the crisis. However, she said the underlying weakness in the economy would remain “for quite some time” with a way to go until the labour market bounces back. ”Ongoing uncertainty about if and when restrictions can be completely removed will weigh on this process, and this will mean it takes quite some time for inflation to sustainably return to the RBA’s … target band,” she said.

CommSec chief economist Craig James expected inflation to remain below or towards the bottom of the RBA’s target for most of 2021, with the central bank committed to keeping the cash rate at record lows for the next three years.

“The economic recovery is under way. But with unemployment rate likely to hold near 5.75 per cent to 7 per cent over 2021, wage growth should remain modest, as should inflation,” he said. “We can’t be totally complacent”.

Why Did Lady Gaga and Christian Carino Split?