In the middle of John McEnroe’s private art gallery in SoHo, New York, rests the body of a dead man, guts and intestines gruesomely laid bare to those who walk through the door.

“It’s a body lying in mourning,” McEnroe explains. “To me, it says that you can always be in a far worse position so look at the bright side of life in this chaotic world we live in. The artist is a guy called Matthew Day Jackson. He’s used material that’s lying around his studio, and then put it on this 18th century marble table. He’s juxtaposed the old with the new.” 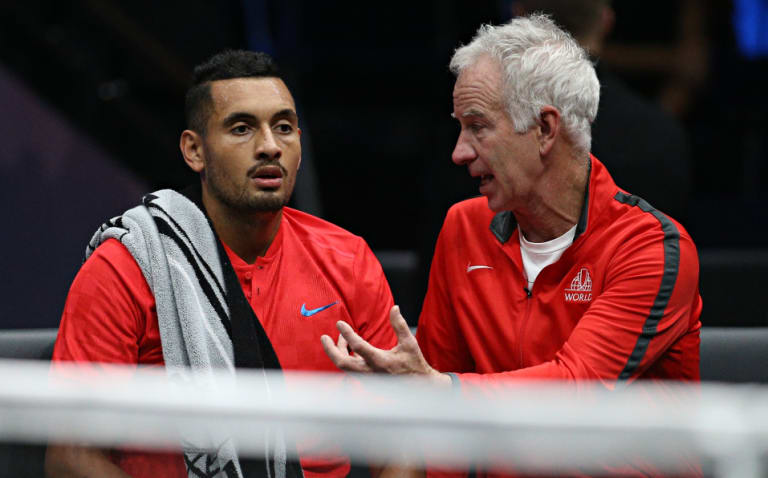 Mentor: McEnroe imparts a few pearls of wisdom to Kyrgios during the Laver Cup.Credit:PA

“Matthew’s a genius guy with a lot of talent,” he continues. “But, like tennis players, that talent doesn’t mean you’ll make it big. You need drive and a lot of luck, too. That’s what’s always drawn me to art: it’s like being a tennis player, because you’re out there on your own. People are taking pot shots at you and you are laying yourself on the line. The upside is, if you are at your best, there’s no better place to be.”

McEnroe is talking here about a bearded 45-year-old American contemporary artist – but you just know he might as well be talking about Nick Kyrgios.

He arrives in Australia shortly to front Channel Nine’s coverage of the Australian Open from January 14 and you can already hear him describing Kyrgios’ dramatic rise in the first week of the tournament and then inevitable meltdown that often comes in the second. We will ask why tennis players seem more tortured than the rest of us slobs and McEnroe, who has a masters’ degree in the subject, will try to explain for us what Kyrgios is going through.

“I reached out to Nick lately because I worry about him,” McEnroe says. “I like him as a person and I want to see him enjoy this. To not be tortured.”

McEnroe was in the commentary box at Centre Court at Wimbledon in 2014 when a 19-year-old Kyrgios, who was ranked 170th in the world, beat Rafael Nadal, then world No.1, to reach the quarter-finals in his first appearance at the All England Club.

McEnroe could smell the breeze. The sport had been dominated for so long by Nadal, Federer and Djokovic. But here was a new "genius guy with a lot of talent". Change was coming.

“We’ve been waiting for this for a while,” McEnroe said. “We keep saying, ‘Who is the next guy?’ and I think we’ve found that guy right now. He’s acting to me like he could win this tournament.” 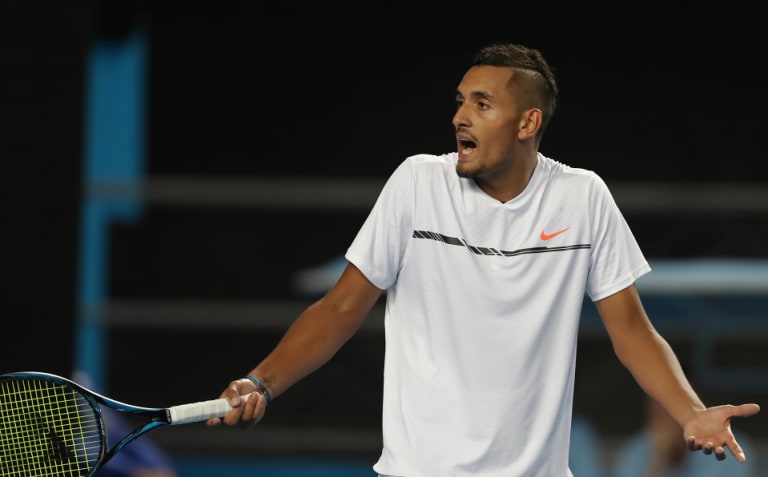 ‘Black eye for the sport’: Kyrgios crashes to a controversial loss to Andreas Seppi at the 2016 Australian Open.Credit:Alex Ellinghausen

Kyrgios didn’t and has rarely looked like winning since.

McEnroe has been as critical as anyone in the years since, including calling Kyrgios’ five-set loss to Italian Andreas Seppi at the 2016 Australian Open as a “black eye for the sport” because Kyrgios appeared to give up.

The Laver Cup repaired the relationship between the two when McEnroe was coach of the world team that Kyrgios was a part of. In a piece for the Players Voice, Kyrgios recalled a conversation between them.

“Why did you play tennis?” Kyrgios asked McEnroe. “You don’t really have a personality suited to tennis.”

“My parents pushed me at first, but really, I play for the same reason you do,” McEnroe replied.

“We’re not very good at anything else.”

Recalls McEnroe: “The good thing for Nick would be, before it’s too late, to get some perspective. For him to realise he’s been blessed with some extraordinary talent. He clearly has mixed emotions with it and, hopefully, there’s the right set of people around him to make him realise that he will have more regrets if he doesn’t embrace it. I understand the battles he has in terms of the love-hate relationship dealing with the expectations and pressures that he has. But he’s going to feel worse about it if he doesn’t try to be the best he can be. He will feel worse about that if he doesn’t end up being the player he thought he was. If he truly doesn’t like it, he shouldn’t do it. Because it will get worse if he doesn’t manage to enjoy it. I mean, how many Roger Federers are there out there who almost love it all the time?”

McEnroe’s legendary on-court outbursts painted the picture of a player at war with himself. He’s indeed mellowed with time – “I’m 60 next month, I’m in deep shit if I haven’t!” – but he says much of that anger was reserved for the court.

“Most people are angst ridden and have that battle with their emotions,” McEnroe says. “People see it play out right there on a tennis court, me being an obvious example. But when I had time to reflect in my hotel room, I was able to appreciate the good things and realise that there are a whole lot of worse ways to make a living. There’s actually no better way.

“The problem for Nick is there is a lot of scar tissue that builds up. The first thing, to me, is to make sure he can compete as hard as he can every time. He is nowhere near that. I don’t know the reasons. He might’ve felt injured. He might’ve felt like he had a spider bite.

''But the bottom line is, when he goes out there, you see an umpire get off the chair like one did at the US Open and say, ‘Hey listen, you’ve got to start trying here. This is bad for you and bad for the sport’. That’s the best thing I’ve seen an umpire do in a tennis match. That he felt that bad about what he was watching, he wanted to get off his chair and get on his knees and look Nick in the eye and say: ‘Come on’. This is the issue. That’s the issue for Nick’s sake and for the sport’s sake that has to be dealt with. Otherwise it will be too hard to watch.” 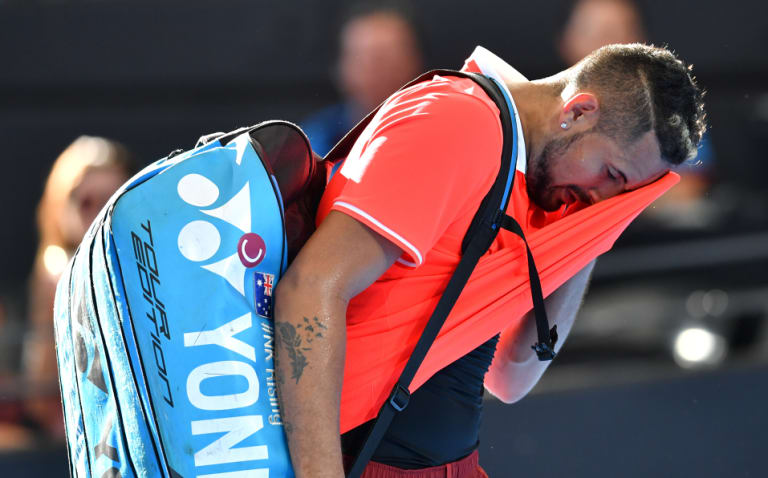 Hot and cold: Kyrgios was bundled out of the Brisbane International this week in the second round by Jeremy Chardy.Credit:AAP

When McEnroe retired from singles tennis in 1994 with seven grand slam titles to his name, he vowed he would never become a television commentator. Now, he’s considered the best in the business. He’s more than comfortable critiquing the world’s best and has taken down Serena Williams on more than a few occasions.

He was in her corner, though, after he epic meltdown in last year’s US Open final in which she branded chair umpire Carlos Ramos a “thief” as she was penalised points for apparent coaching from the stands.

“If guys lose it it’s not as bad as if girls lose it,” McEnroe says. “That’s something that Serena was pointing out and she was right. I was waiting for her to use my name but she didn’t. The message is pretty clear that people like myself got away with more and that is true. The truth is also that she went over the line — and so did the umpire. Just like I know there were times when I was wrong — and so was the umpire. That doesn’t mean that it’s OK that she did it. But people get coached all the time. Why was she suddenly being penalised by being coached? It did seem sort of weird. The truth is it happens all the time. Then she took the lead 3-1 and broke her racquet, and when you break it the way she did, that’s a point. Personally, I’ve been there many times. You push it. You know where you can go before you get penalised again.

“Serena is so good that when you look back she’s so good that she’ll be remembered for her ability to come back from match point down more than she will be remembered for losing. More people remember me for my outbursts as they do know that I was number one for three of four years in a row. That’s annoying. The irony is that people almost look at me in a better way. They like me more now than they did now. I used to get fined for the stuff that I did — now I get paid extra for it! But I understood her frustration at the US Open last year. I got away with far worse.”

The one time McEnroe didn’t get away with it was at the Australian Open in 1990 when he became the first men’s player since 1963 to be defaulted out of a grand slam tournament. He was playing Sweden’s Mikael Pernfors in the fourth round. He led 2-1 but then, during the changeover, stopped in front of a lineswoman he thought had made a bad call and glared at her. It went downhill from there…

''The truth was I got down at one stage in the fourth. I took my racquets and flicked it on the court and caught it myself but you could hear a crack. It’s a judgement call for the umpire. It was like 130 degrees (54 degrees celsius) on the court. I thought that I would be cut some slack and he gave me the point penalty.

''It was similar to Serena. I went up and said cut me some slack. I said I wanted to see the supervisor. There was no sense in that because the 50 times I ever did that he did nothing … The bottom line was I didn’t know the rules had changed from warning-point-game-match. It had been changed to warning-point-match. My manager at the time forgot to tell me the rules had changed …"

"See! Even then I tried to blame someone else!"

McEnroe's volcanic temper, though, could never hide his brilliance on the court. Consider this from the late Arthur Ashe: "Against Connors and Borg you feel like your being hit with a sledgehammer. But this guy McEnroe has a stiletto; he just slices you up."

I read that down the line to McEnroe.

"I like that quote," he says. "What I brought to the table in terms of my style and intensity, the way I was taught to play was a slower death for the opponent but I think it was effective."

"Man, that's the best compliment I can get."

Ballon d'Or winner Luka Modric: the refugee whose granddad was shot dead when he was six who became a world superstar