Lisa Ashton will make her PDC World Championship debut on the tournament’s opening night next Thursday, and she admits that her Alexandra Palace bow represents the opportunity of a lifetime.

The four-time BDO women’s champion stormed through last month’s UK & Ireland qualifier, dropping just five legs across her seven matches to guarantee herself a minimum of £7,500 in the process.

‘The Lancashire Rose’ has lifted the Lakeside title in four of the last five years, and now she takes on former BDO World Championship semi-finalist Jan Dekker in her opening-round tie.

Speaking to the Darts Show podcast, the 48-year-old admitted that despite the inevitable nerves, she’s relishing her Ally Pally debut.

“I’m really looking forward to it. It’s not a bad draw so hopefully I can play like I can,” Ashton said.

“I’m excited because it’s the opportunity of a lifetime, a bit nervous because it’s a lot different to what I’m used to, but I’m just really excited to get up there and enjoy it.”

Ashton came through a field of over 120 players to qualify in Milton Keynes, with her BDO counterparts Deta Hedman, Fallon Sherrock and Lorraine Winstanley also in action.

However, despite the strength of the field, Ashton was the big favourite to qualify and she admits she felt under pressure throughout.

“Everyone was saying ‘you’re the favourite’, but you can’t be guaranteed anything with the way the ladies are playing.

“I thought there was more pressure going into that than there is going into the World Championship,” she added.

However, the four-time world champion wasn’t the only Ashton in action at Arena MK, as her daughters Danielle and Lindsey were also battling it out for World Championship qualification.

Lindsey was beaten in the opening-round, whilst Danielle progressed to the last 16, before being edged out by Courtney Hine- daughter of PDC veteran Steve.

Ashton was convinced that she would be pitted against one of her daughters, and admitted it’s a very tough dynamic to contend with.

“I was looking at it and I was thinking I’m guaranteed to hit one of them. You try to support them but then if you’re drawn against them you’ve got to go against them,” Ashton said.

“I’ve played Danielle quite a few times as she does the circuit, but this year I haven’t clashed with her. 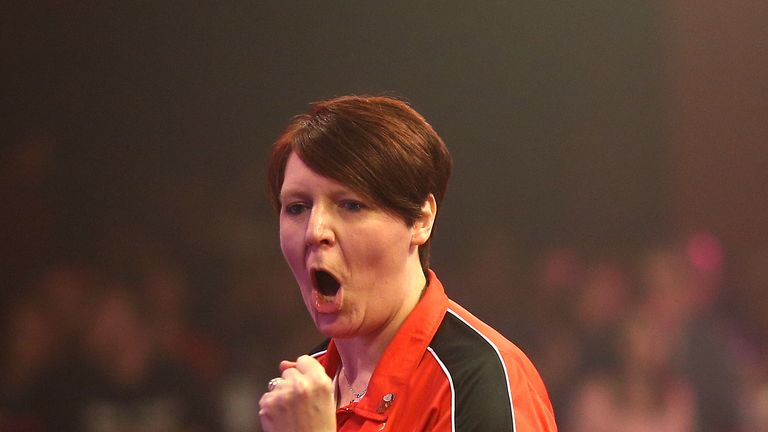 It is very hard. You’re trying to support them and sometimes you see them struggling and you want to say ‘come on’ but at the back of my head I’ve got to say ‘turn off, she’s not your daughter, she’s your opponent’.

Ashton on playing against her daughters

“Lindsey- I’ve clashed with her and it was hard to try and support her, but at the end it was a very close game and I came through the victor, but I kept saying: ‘I swear I’m going to ground you in a minute!’

“It is very hard. You’re trying to support them and sometimes you see them struggling and you want to say ‘come on’ but at the back of my head I’ve got to say ‘turn off, she’s not your daughter, she’s your opponent’.

“When we come off its just back to Mother and Daughter, that’s it,” she added.

The Bolton-based star will become the third woman to compete at a PDC World Championship, following in the footsteps of Gayl King and Anastasia Dobromyslova, with the Russian returning a decade on from her debut. Ashton has never experienced a raucous atmosphere that’s comparable to the Alexandra Palace, but she is confident of taking the occasion in her stride.

“I’ve never been [to the Alexandra Palace] but I’ve always wanted to go. I’ve been to some of the Premier League ones and seen the atmosphere there, but I’m really looking forward to going and it’s an opportunity to actually be on the stage.

“It was a pub sport and it’s always been noisy. When we play in the BDO it’s very quiet, but then sometimes a player would rather have a bit of noise.

“As you can see Ally Pally is so very loud, so it’s just something I’m going to have to learn, soak it in and hopefully take it as experience and use it as a positive,” Ashton said.

The two-time World Masters winner competed on the PDC Challenge Tour circuit last year, but this will be her first taste of major televised competition in the PDC.

‘The Lancashire Rose’ will be headlining the opening night alongside reigning world champion Rob Cross, and Ashton admits it’s a huge privilege to be included in such esteemed company.

“It’s an honour to be classed as the two world champions opening it [the tournament]. I couldn’t ask for anything more but I’m just going to enjoy it and try my best.”

Attention now switches to the World Championship with 16 days of coverage, kicking off with a live preview show from Alexandra Palace at 6pm on Thursday December 13 right through until the final on New Year’s Day.

Keep up to date with the news as the tungsten enters its busiest time of year with the PDC World Championships just around the corner get all the latest at www.skysports.com/darts and join in the conversation @SkySportsDarts

River Plate midfielder Enzo Perez starts in goal for Covid-hit side, plays on with injury and named MOTM in bonkers win