General Hospital‘s Sonny Corinthos (Maurice Benard) is more than a prolific mob boss, he’s a mover and a shaker, but no one can seem to shake out what he moves.

Ever since Sonny hooked up with Luke Spencer (Tony Geary) back in 1993, he’s had his hand in prostitution, drugs, murder and the usual mob boss vices, including wooing many loves.

No wonder he became a coffee guru with all that shtick going on. Being a mob boss is exhausting, especially since you don’t have your buddy Spencer around anymore for comic relief. 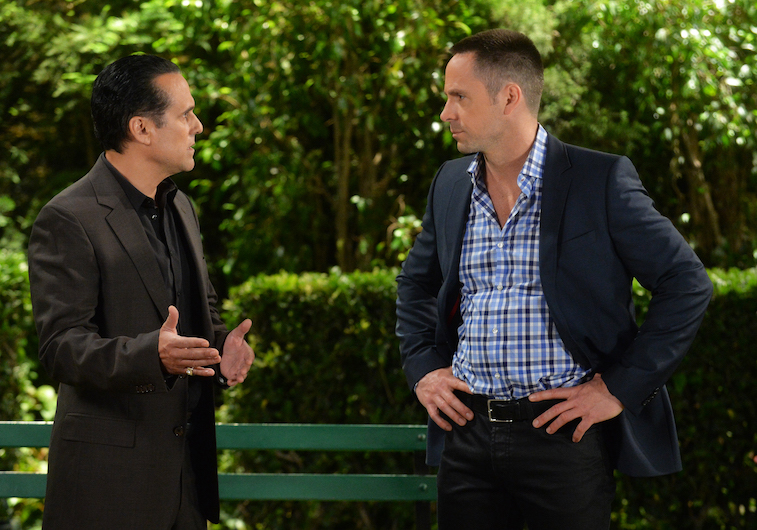 Sonny continually fights for control of the mob scene on the East Coast. Only five mob families exist in the New York in real life, but they’re past their peak and mob hits are rare.

The usual gambling, racketeering, extortion and the loan shark business still keep them in the thick of things. But in Port Charles, mob activity is still prevalent, even with an aging, bipolar mob boss struggling with mental health and family issues.

It’s been 25 years since Sonny Corinthos hit the scene and fans still wonder what he moves.

Riverfronts have always been the forefront of crime syndicates since the piers and warehouses offer great fronts for illicit activities.

General Hospital‘s no different, and fans run the gamut of theories about what Sonny moves down on the waterfront.

There’s plenty of commentary and wiki movements in fandom that allow armchair theorists to voice their opinions on what Sonny Corinthos’s family business is all about, including fake Gucci and Louis Vuitton bags, the usual protection racket, and pirated Godfather trilogy DVDs. Many speculated that since Port Charles is close to the Canadian border that he heroically moving affordable prescription drugs and Canadian maple syrup.

The main consensus is that his coffee import business is definitely a front. One fan says that he is pushing General Hospital‘s most precious commodity: people. Sonny’s considered both a criminal and a hero around Port Chuck and he has his hand in the lives of most of the main characters, so that theory may hold water.

After all, it is down at the waterfront where deals are made and shootouts take place near the warehouses — most recently Laura Collins (Genie Francis), who has a history of riverfront disappearances and adventures.

The theory of coffee perks

Now it’s TV’s standard operating procedure that coffee grounds hide the smell of drugs so they can’t be discovered by police dogs. Not so in real life as police dogs can separate smells, including coffee and drugs. Drugs aren’t the big theory as Sonny doesn’t like them, although they are a staple of thug life.

So if it isn’t coffee masking drugs, what is it? Is he moving pirated Keurigs? Back in 2017, according to GH Snark, he didn’t know the difference between espresso and a french press, so maybe there’s pallets and pallet of non-organic Sonny’s K-Kups in the warehouse?

After all, those are easy ways to a healthy cup of coffee since coffee cuts your risk of heart attacks. Sonny’s that kind of hero to many of his fans.

Whatever it is, Maurice Benard has made a career of moving performances,  eight Emmy nominations with one win, and an unforgettable character. No matter what he moves as Sonny Corinthos, he will remain an endearing, heroic, mob boss who will remain part of the General Hospital landscape for the foreseeable future.

Will the X-Men or the Fantastic Four Join the MCU First?

When was Michelle Hardwick and Kate Brooks' wedding as they welcome new baby?