Good Morning Britain aired a controversial debate on pet ownership this morning, with one guest arguing it’s ‘selfish’ for elderly people to own a dog.

Presenters Susanna Reid and Adil Ray hosted the segment, which was sparked by novelist Jilly Cooper announcing she wants another pooch at the age of 84.

Columnist Lara Asprey joined the ITV programme to argue that older people should be ‘careful’ about taking on a dog ‘when you’re in the later stages of life’.

‘You have to be considerate to the dog, it needs to have a home it can live in for its life too,’ she warned. ‘It’s a sense of responsibility.’

Lara went on to say that she doesn’t understand the need for pensioners to have sole responsibility over the animal and suggested they could club together to share ownership.

‘I think the elderly could, if they wanted to, share a dog, borrow a dog, or just have an arrangement with a friend or family member before getting a dog to say if anything happens to me, will you be its guardian?’ she continued. 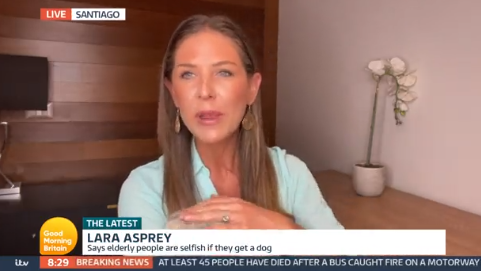 ‘Otherwise, I feel it’s not really fair on the dogs, it’s a bit selfish.’

Jan Leeming, 79, firmly disagreed with Lara’s view and highlighted care is taken into matching people with rescue dogs based on their abilities.

Sher also pointed out: ‘You can take on a dog at 30, you can have a child at 30 and sadly you might pass away. I think that’s a bit narrow.’

Absolute rubbish @GMB If it wasn’t for the fact that my elderly Dad had a dog after my mum passed away his life would have been much shorter, it gave him the motivation to get out every day & get on with his life. #GMB

If someone is fit enough to walk a dog, play with it, feed it and clear up after it then they should have one. Also an 80+ person doesn’t need a puppy but the likes of Battersea have older dogs that need love and homes, so people should stop being ageist #gmb

#gmb yr never too old to own a dog. There are many old dogs looking for homes. Donât deny either the right

How terribly disrespectful to lots of older people who care beautifully for dogs. Is she for real?? #GMB

#gmb well theres plenty of young people who should be banned from owning a dog but arent so whats the point?

#gmb how can you put an age restriction on having a dog? As long as you look after the dog what’s the problem?

Viewers were up in arms over Lara’s stance too, with one writing: ‘Absolute rubbish @GMB If it wasn’t for the fact that my elderly Dad had a dog after my mum passed away his life would have been much shorter, it gave him the motivation to get out every day & get on with his life.’

Echoing a similar sentiment, another penned: ‘How terribly disrespectful to lots of older people who care beautifully for dogs. Is she for real??’

What do we reckon then?