Home » TV & Movies » The Coming Back Out Ball Movie

Sue Thomson’s new documentary, The Coming Back Out Ball, culminates in a celebration. In October last year a party was held at Melbourne Town hall for the elders of the city’s LGBTI community, the now ageing people who’d lived through the decades when their sexual identity was often unfairly both a secret and a crime. But the groundwork for the film, started several years prior, began in far more humble circumstances.

“When a documentary is about people it takes time – they have to learn to trust you. You’re going into a world where people are sharing parts of their lives and revealing themselves, you have to expect that you would be told to go away,” Thomson says. “There was reticence initially, perhaps even fear, but when you spend time with people and help the project come to fruition, they get to know you as a person.” 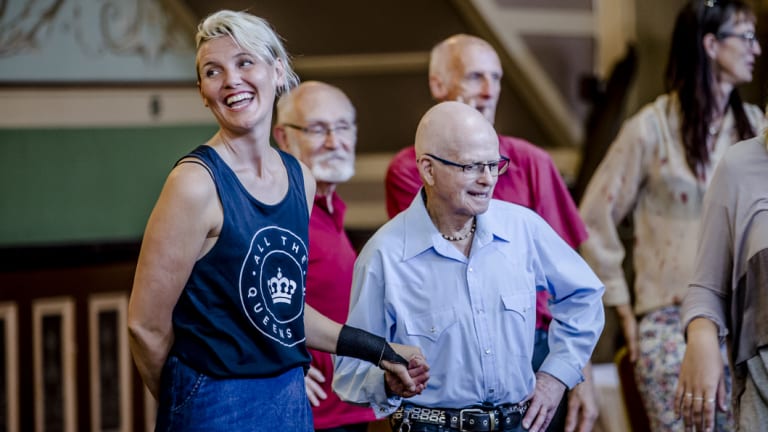 The Coming Back Out Ball Movie.Credit:The Backlot Films

The Melbourne-based documentary filmmaker goes into every project expecting to not reach the end. She once spent a year preparing a film about five Afghani sisters living in Melbourne, and was planning funding applications and trips to their homeland to shoot sequences when the siblings told her the film couldn’t happen because their story would bring shame to their family.

In the case of the subjects eventually documented in The Coming Back Out Ball, Thomson was dealing with private people who despite their community work had never shared their own story, or who were grappling with returning to the closet to help secure aged-care housing. Thomson spent six months with non-binary activist Nance Peck before she was allowed to start shooting, while for others being in the film provided present day impetus.

“When we began Michelle McNamara hadn’t fully transitioned yet,” Thomson says. “She was living as the male persona four days a week, and as a woman for three. She was quite nervous about being captured on film, but now Michelle has fully transitioned and is an out and proud transgender woman. She believes that the film has been a part of her transitioning: seeing her narrative told helped validate her as a person.”

As a young woman Thomson was initially involved with Melbourne’s fringe theatre scene through La Mama and Anthill Theatre Company, before volunteering at the community broadcaster Open Channel and discovering visual storytelling. Her first documentary feature, 1994’s Boys and Balls, was a study of male obsession that she envisaged as a pointed joke, but reshoots mandated by the ABC added interviews with famous sportsmen. Since then, however, she’s been drawn to the marginalised. 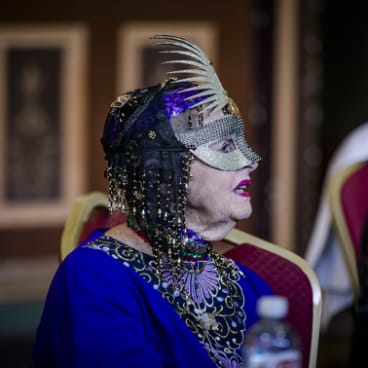 The Coming Back Out Ball Movie.Credit:The Backlot Films

“I love telling stories about people who don’t have a voice,” Thomson says. “I’m not sure what drives me, probably just wanting to effect a small amount of change in the world, hopefully in an entertaining way. I think I’m in this industry because I can help shift attitudes.”

“The great thing about The Coming Back Out Ball – and older people in general – is that they’re entertaining, they’re intelligent, they’re funny, they’re opinionated, and that does translate to audiences,” she adds.

Thomson trailed Tristan Meecham, the artist who organised the event, through outreach meetings and patient home visits, also establishing her own links. The individual tales can be sweetly rewarding or starkly confronting, but when intertwined by Thomson and editor Uri Mizrahi they combine to make a shared history that peaks with a night out whose positivity the filmmaker ultimately had to keep in perspective.

“You’ve got to think of your audience and how far you can take it,” Thomson says. “The Ball is actually the beginning of something, so there’s a sense of profundity at the end of the documentary. Some of these people have trauma and there’s a lot more work to be done.”

The Coming Back Out Ball premiered in August, playing the closing night of the Melbourne International Film Festival, but yesterday was the commercial release, with Thomson planning to slip into the back row at Carlton’s Cinema Nova for the initial morning session. She can’t quite let the documentary go yet, but she’s optimistic it will find an audience.

“Whether through Netflix and even podcasts, it feels like factual entertainment is having its moment,” Thomson says. “Documentary filmmaking is accessible now. We can get into cinemas and lounge rooms and onto computers and phones. I’m thinking that in the next few years we will garner larger audiences.”

The Coming Back Out Ball is screening now at Cinema Nova, Carlton, and Dendy Newtown.

Emmerdale spoilers: Will Taylor panics as Dawn and Billy disappear from their wedding