Doors open and closed to Afghan refugees: Hotels in Kent and Huddersfield are set to take in families fleeing Taliban… while seaside town of Torbay refuses to take anyone due to ‘its own housing crisis’

Hotels across Britain have flung open their doors for arriving Afghans as they flee the clutches of the Taliban back home.

Rooms in Kent and Huddersfield are being readied for the refugees as they fly into airports including Birmingham and RAF Brize Norton in Oxfordshire.

Industry giants such as Best Western are working with the Home Office on providing the temporary accommodation.

Councils including Manchester, Liverpool, Sheffield and Leeds also said they will house Afghans – but have not said in which hotels.

But the leader of Torbay Council Steve Darling refused to take any, citing the housing crisis in the small seaside resort. 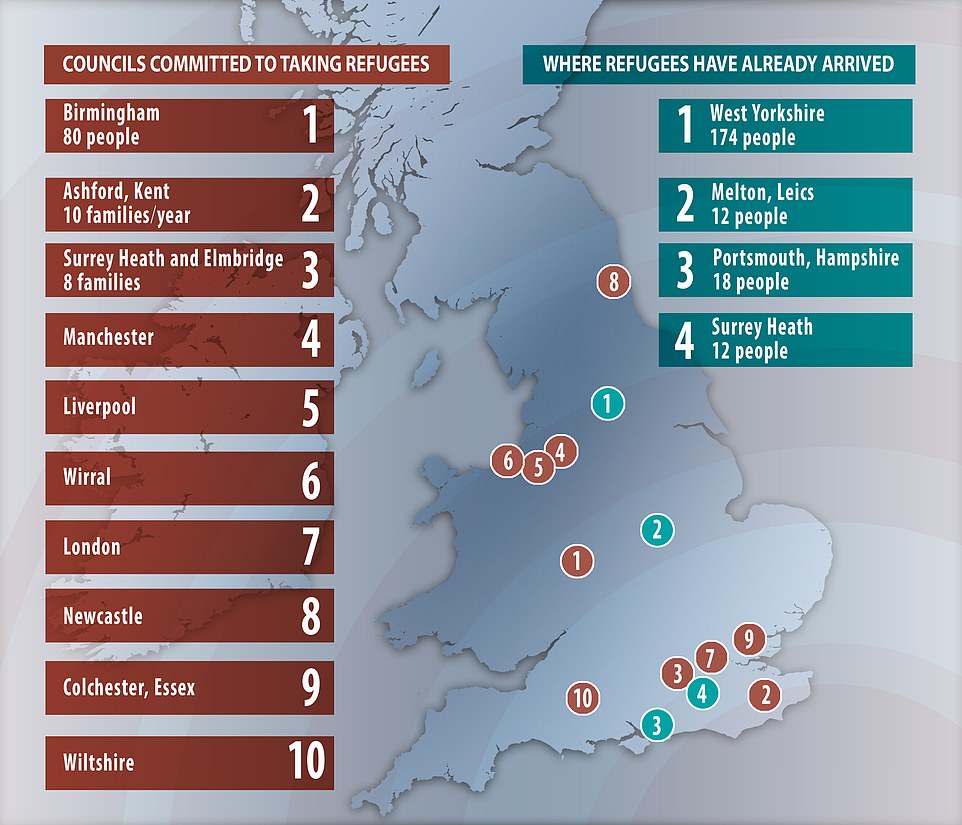 At least 240 refugees have already arrived in England per reports, with West Yorkshire housing the vast majority with 174 as local authorities across the country pledged their support

The Gothic building, which is made up of 53 rooms and has picturesque gardens close to the city centre, only reopened in May after being shut due to lockdown.

Manager Mark Cotman refused to be drawn on the arrangements of when they will arrive and how long they will stay.

Meanwhile two hotels in Huddersfield said they would take in the refugees when they get here. Cedar Court Hotel and the Old Golf Hotel are reportedly being set up as temporary accommodation for Afghans.

Managing Director Wayne Topley of Cedar Court Hotels said the site would help those who assisted the British Army in operations over the last decade.

He told Examiner Live: ‘We have offered our services to the Home Office and we would love to help those who have helped our forces. Anything we can do to facilitate their transport will be done.’ 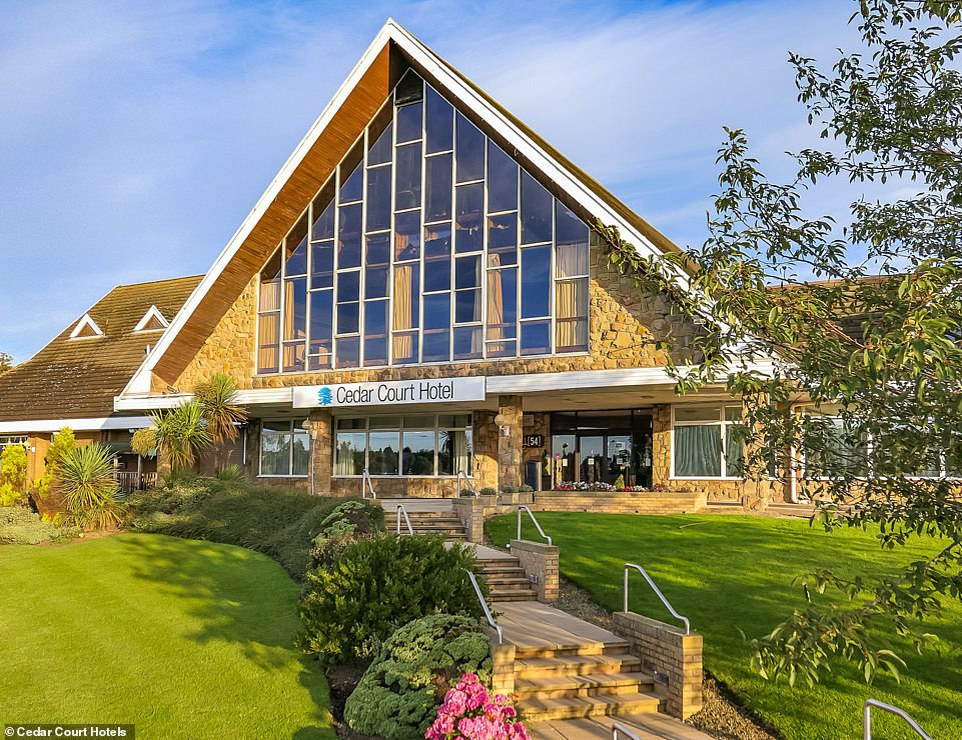 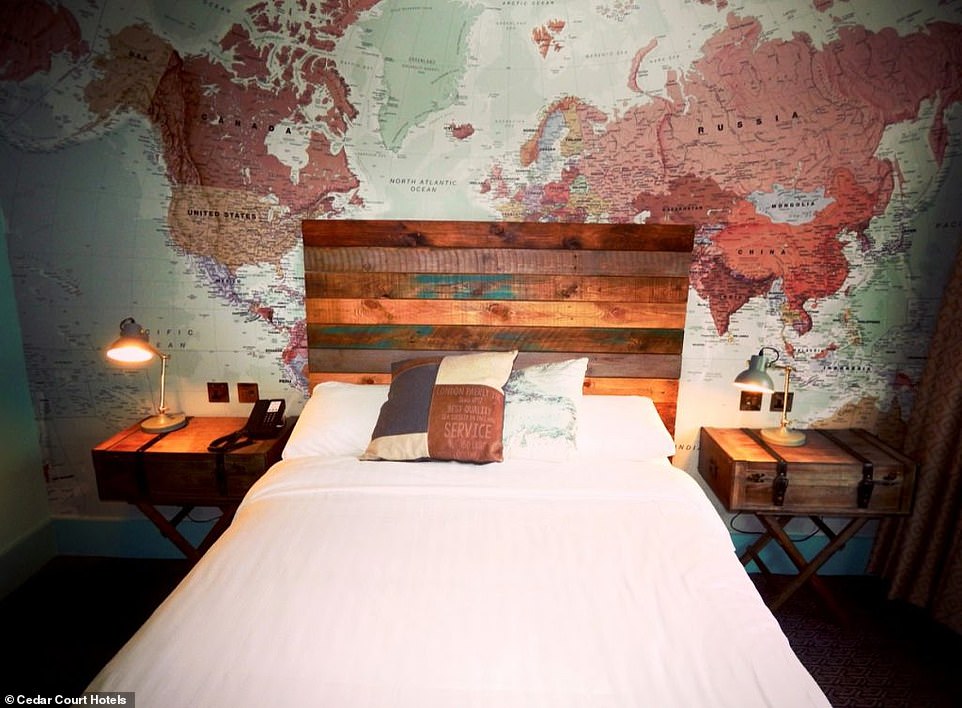 Cedar Court Hotel is believed to be able to hold about 70 families if given the go ahead by the local council.

The Old Golf Hotel, which spiralled into administration last year, is also being touted as a potential location for 50 men.

More than 100 local councils pledged their support in rehoming Afghans as the first RAF rescue mission for those fleeing Kabul landed.

Local authorities across the country committed to taking in displaced Afghans as Boris Johnson launched plans to resettle up to 25,000 refugees over five years.

At least 240 refugees have arrived in England since the fall of Kabul, with passengers disembarking an RAF Voyager A330 aircraft at RAF Brize Norton in Oxfordshire.

Families fleeing Afghanistan have been rehomed in West Yorkshire, Portsmouth, Hampshire, Surrey and Melton in Leicestershire.

But more than 100 local councils also pledged to provide accommodation if it is needed.

Council leaders and mayors in Liverpool, London, Kent and Essex all shared statements promising to provide support in their communities. 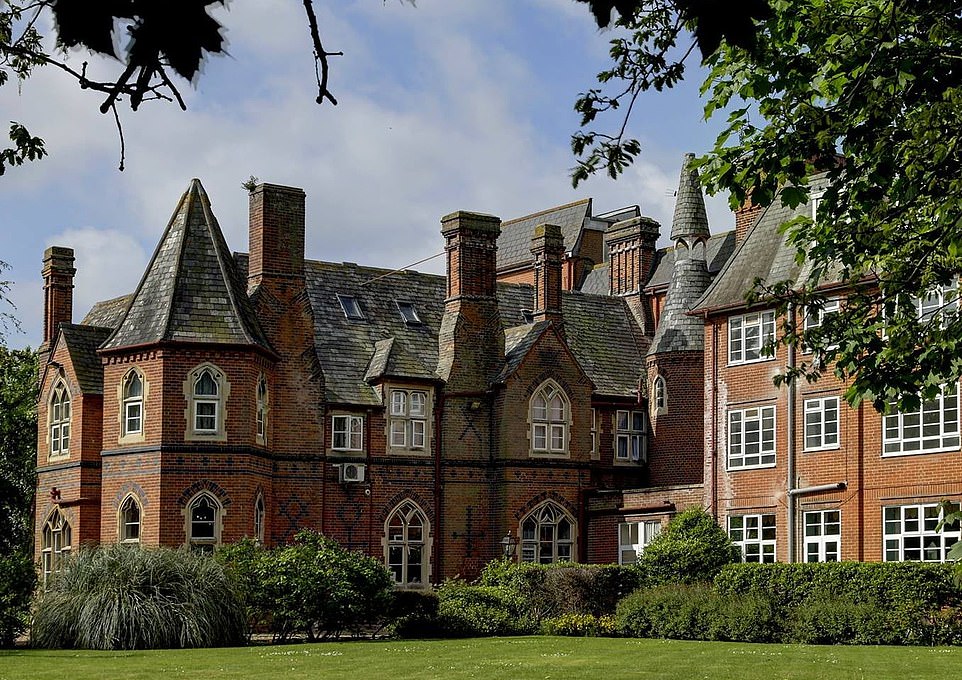 Best Western opened the doors to Abbots Barton Hotel in Canterbury for more than 100 Afghan refugees, 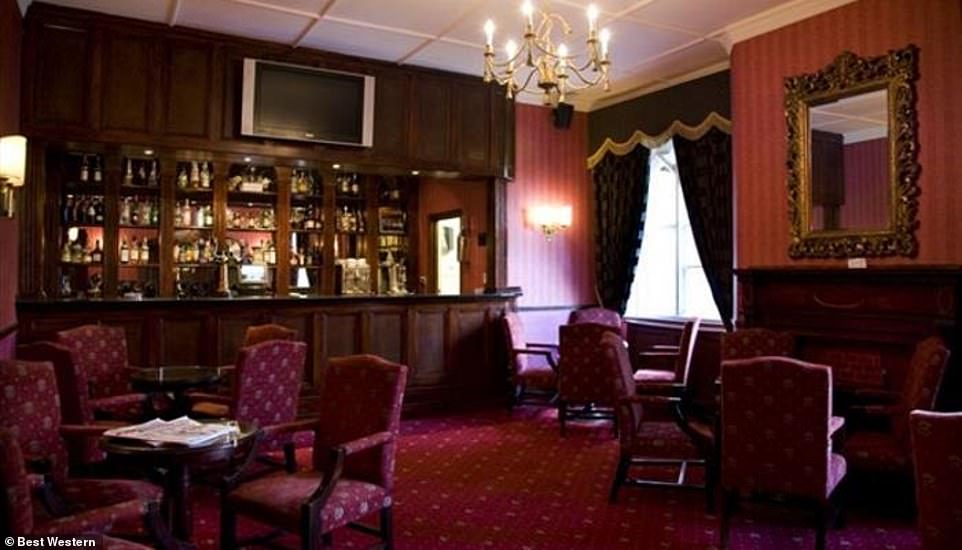 Local authorities were asked to support efforts to relocate approximately 3,000 displaced Afghans in the coming weeks.

Afghans allowed to come to the UK will be distributed across the country, the Government indicated.

A spokesman said it would work with the devolved administrations and local councils to make sure Afghans get help to rebuild their lives.

Birmingham City Council has been in talks with the Home Office since June, with plans to rehome 80 Afghan refugees in private rented housing.

The local authority will receive more than £1million in funding to provide a year’s worth of support to those who are rehomed.

Migration Yorkshire said more than 200 people will be arriving in the county through the Afghan Relocation and Assistance policy. 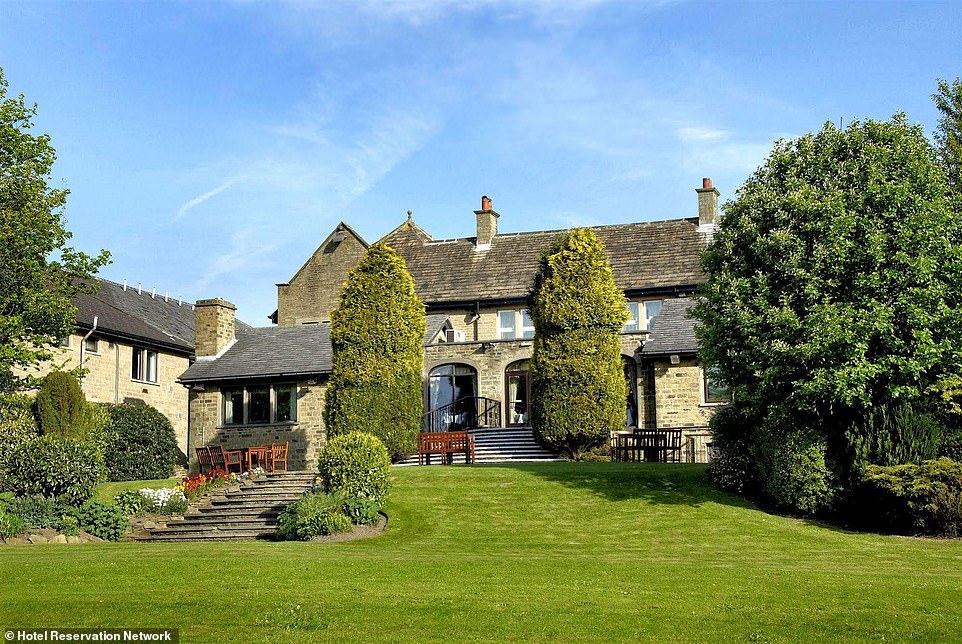 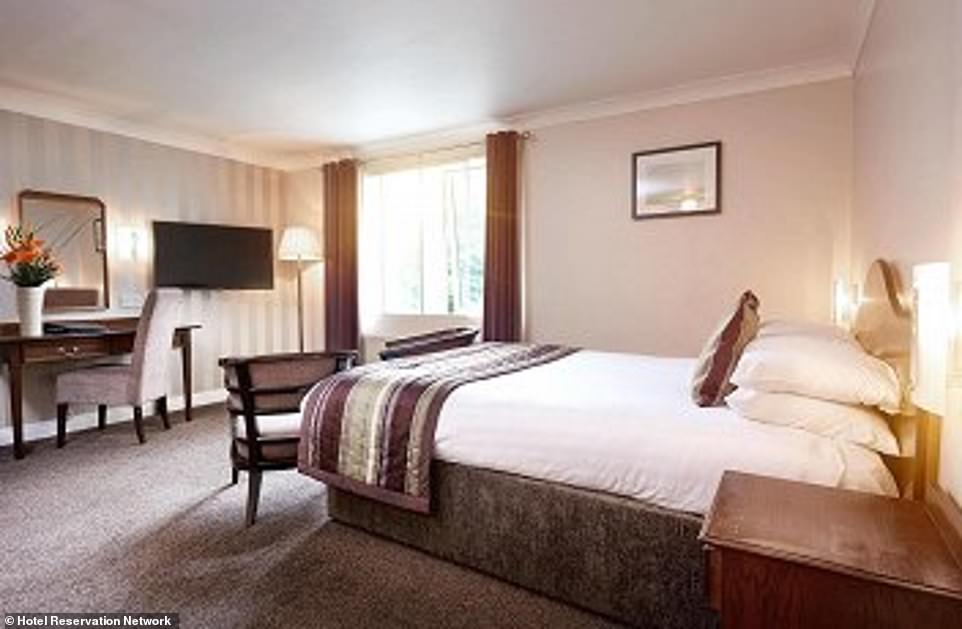 Cllr Gerry Anderson, leader of Ashford Borough Council in Kent, has already spoken with the Home Office to take in families under the proposed resettlement scheme.

It is understood approximately 10 families a year will be rehomed in the town.

He told Kent Online: ‘These people are going to be useful contributors to the country. They’re going to get jobs and they’re mainly English speaking.

‘People may condemn it and gripe about it but frankly I don’t give a damn about that because I think the vast majority of people who are intelligent, reasonable and sensible will realise that what we’re doing is really the right thing to do.’

Similar commitments have been made by Liverpool mayor Joanne Anderson, Greater Manchester’s Andy Burnham and council leaders in Newcastle, Essex and Wiltshire.

He said: ‘Northumberland has a long history of supporting those in need from other countries and prior to the current situation in Afghanistan we agreed to the Government’s request to support their Afghan Local Employed Staff (LES) resettlement proposals.

‘We will also review options to either accelerate or increase our support as necessary.’ 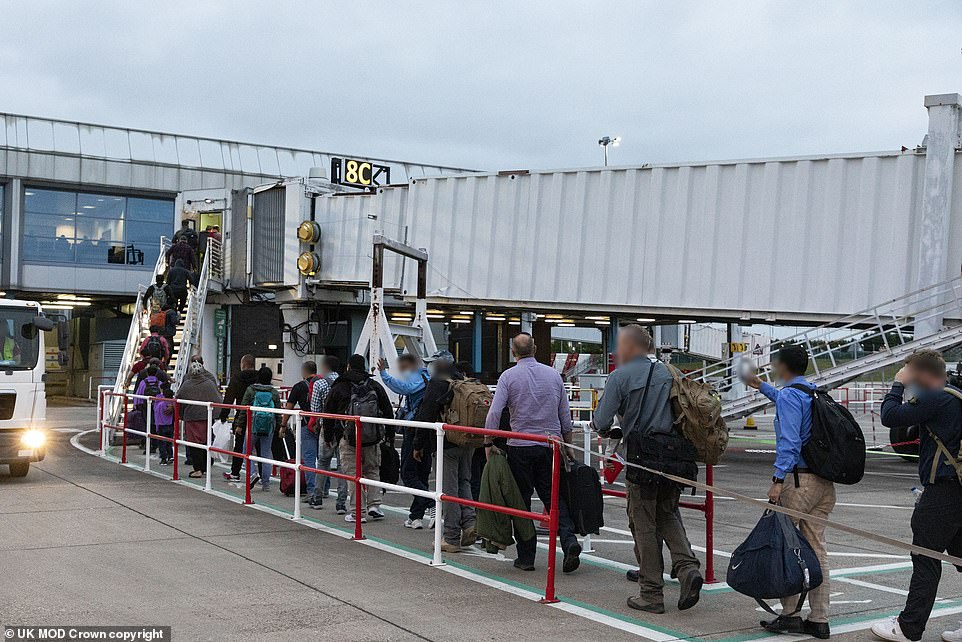 A civilian charter flight arriving at a Midlands airport from Kabul yesterday. The flight carried eligible Afghans under the Afghan Relocation and Assistance Policy Programme and British Nationals who were based in Afghanistan

A collective of Labour-run council leaders in 22 London boroughs, from Barking to Waltham Forest, released a joint statement on the Afghan refugee relocation effort.

They said: ‘We urgently call on the Government to implement a national refugee resettlement scheme programme with target numbers from Afghanistan with proper support and funding to aid delivery, so that local authorities can plan effectively and provide sanctuary.

‘We will work closely with London’s Afghan community and with our voluntary sector and national government to ensure refugees get the support they need to recover from the trauma they have lived through and start to rebuild their lives.’

But one council was quick out the blocks to say Afghan refugees would not be welcome there.

Steve Darling, the Lib Dem leader of Torbay Council in south Devon, said the authority was already struggling to cope with the capacity it had.

He said: ‘We’re having real massive challenges to support our own people let alone Afghan refugees. I don’t think people realise how much of a perfect storm we’ve got in Torbay. We’re in a crisis situation with our own people.’

Local Tory MP Kevin Foster blasted him and told him to ‘get a grip’ after the comments. He said: ‘No one’s expecting an area like Torbay to make the commitment of a large city but to set the level at zero is very disappointing. 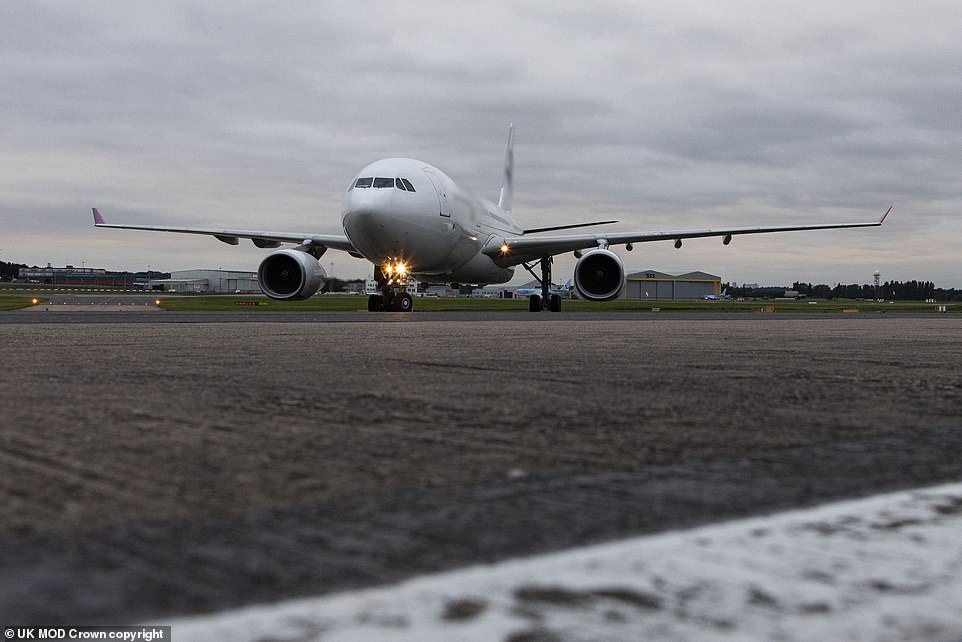 A charter flight arriving at a Midlands airport from Kabul yesterday. The flight carried eligible Afghans under the Afghan Relocation and Assistance Policy Programme and British Nationals who were based in Afghanistan

‘There are people who shared the dangers with our forces and supported our mission who now face extreme danger if they remain in Afghanistan and we all need to make a contribution towards this.

The UK is launching a diplomatic push to encourage allies to join it in offering to take in Afghan refugees fleeing the Taliban regime.

The Government said Britain will take up to 20,000 people wanting to exit Afghanistan as part of its resettlement scheme, with 5,000 in the next 12 months.

No 10 said the Government will be encouraging international partners to emulate ‘one of the most generous asylum schemes in British history’ – but Labour said the offer was not bold enough.

Dominic Raab is due to speak with fellow G7 ministers today to discuss international co-operation before leaders of the group – which, as well as the UK, includes the US, Canada, Japan, Germany, France and Italy – hold a virtual meeting next week.

He also held talks yesterday evening with his counterparts in India and the US – the second time he has spoken to US Secretary of State Antony Blinken this week.

The British ambassador to Afghanistan, Sir Laurie Bristow, said Foreign Office personnel were hoping to get ‘at least’ 1,000 people out of the country every day – but warned there were ‘days, not weeks’ left to complete the mission.