A coalition of protesters including Extinction Rebellion, People’s Assembly and Stand Up To Racism have attempted to block the main entrance to tonight’s Tory party hustings.

Footage shared online shows dozens of eco-zealots banging on drums and chanting while forming a human chain at the main gates of the All Nations Centre in Cardiff, Wales.

But while the start of the event was delayed, protestors were too late to majorly disrupt proceedings after both Rishi Sunak and Liz Truss had already entered the building.

Both candidates are in the Welsh capital to win support of some of the 160,000 Conservative Party members who will vote to determine Britain’s next Prime Minister in September.

Protesters held up signs reading ‘never Truss a Tory’ while another read: ‘They will f*** you over Sunak or later’.

Referencing the PM hopeful’s rapid U-turn on public sector pay cuts this week, she held up a sign reading: ‘I thought it was perfectly OK to cut nurses and teachers’ pay.’ 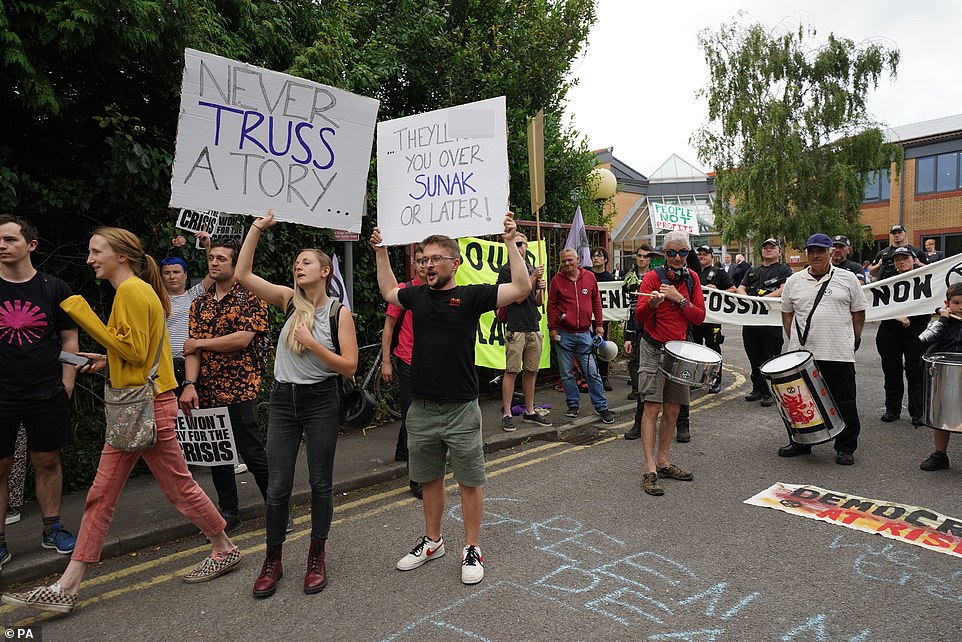 Some held up signs reading ‘never Truss a Tory’ while another read: ‘They will f*** you over Sunak or later.’ 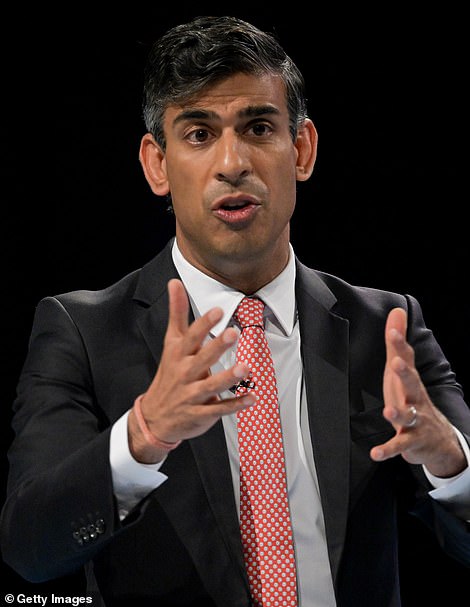 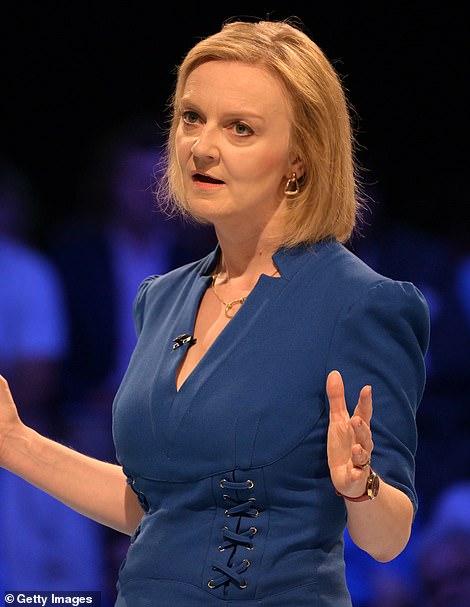 Rishi Sunak and Liz Truss are in the Welsh capital to win support of some of the 160,000 Conservative Party members who will vote to determine Britain’s next Prime Minister in September 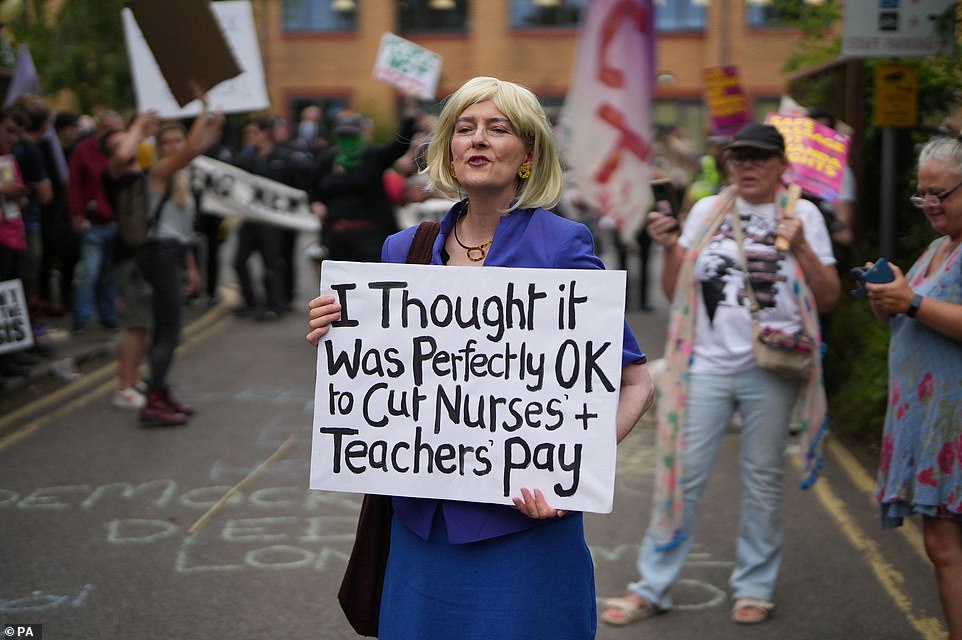 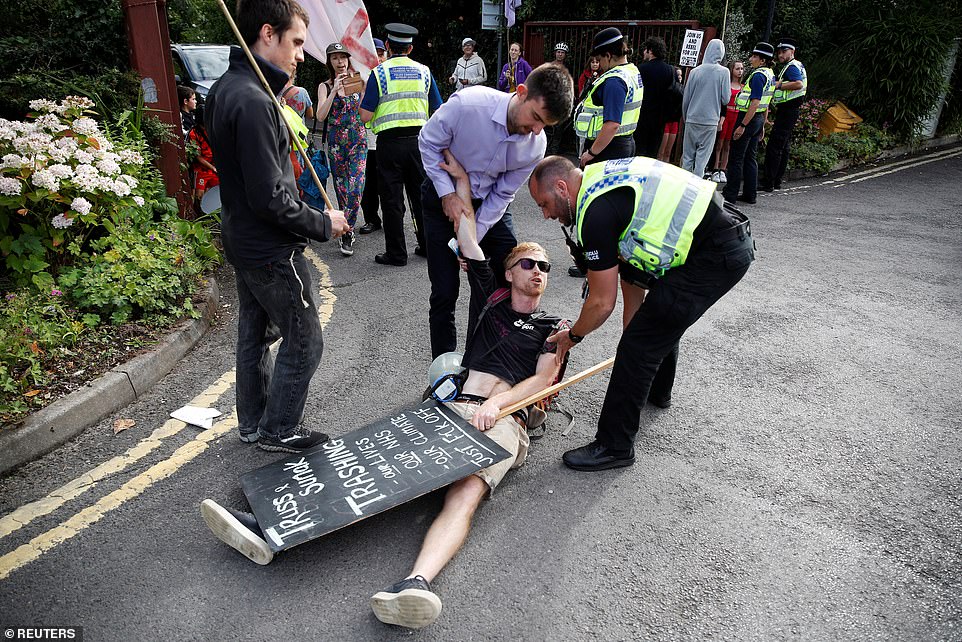 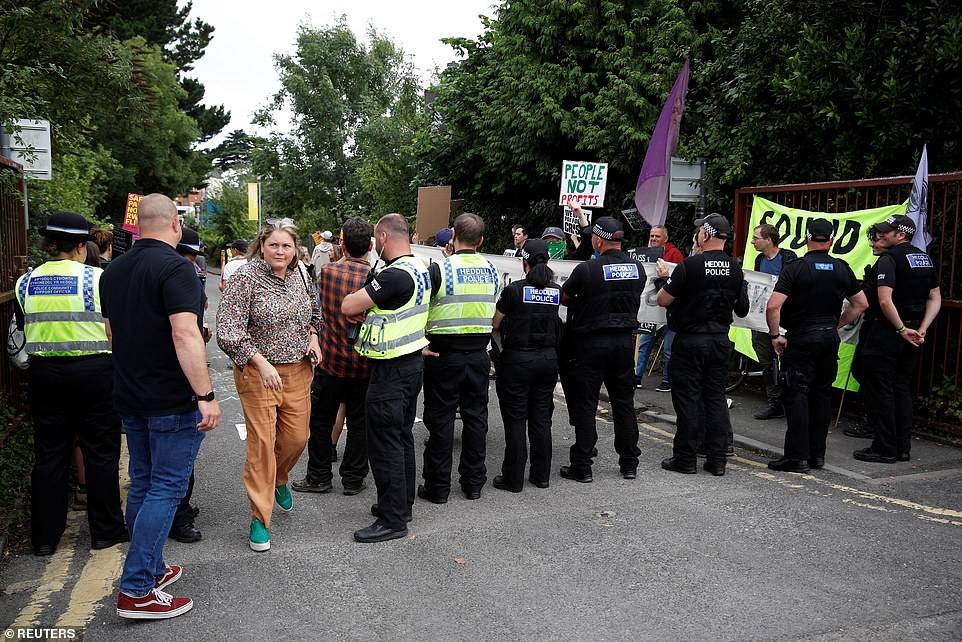 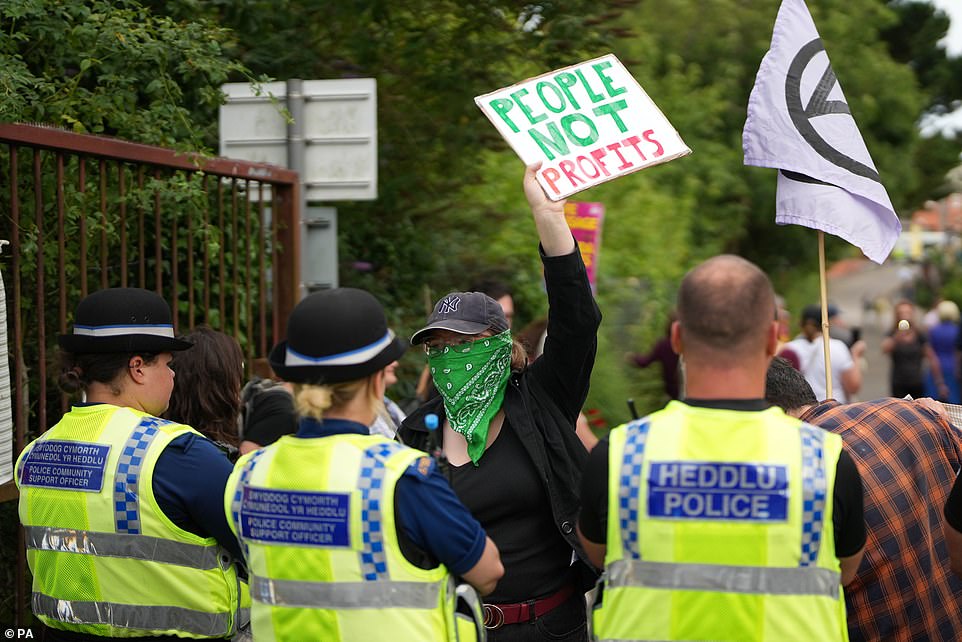 Police watch on as a protestor donning a green bandana over their face holds up a sign reading: ‘People not profits’ 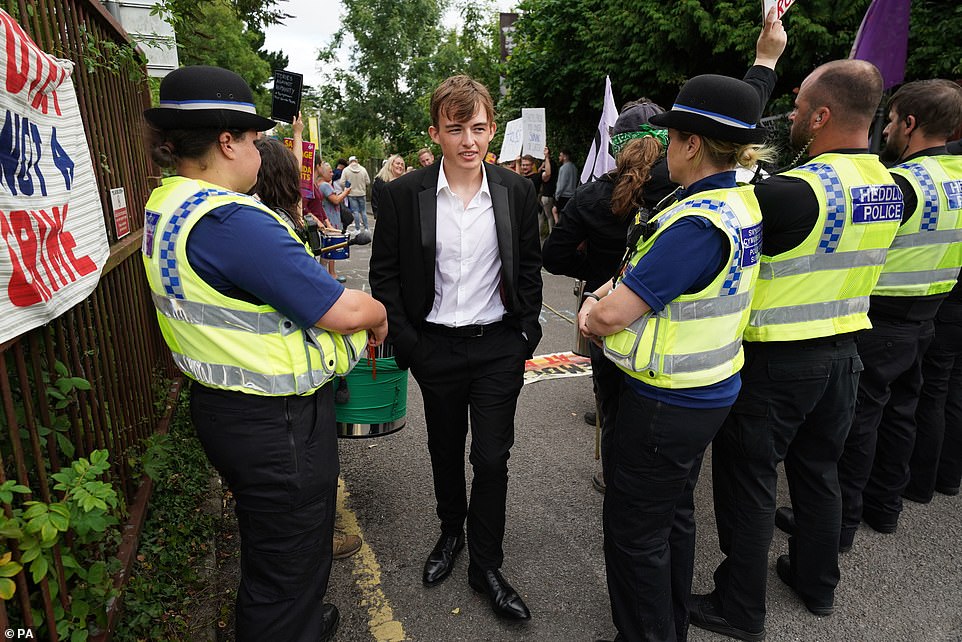 The venue had not been made public in the hours leading up to the sold-out event.

A total of 30 noisy protestors had arrived at the centre but were reportedly outnumbered by local members of the Ready for Rishi campaign.

Two protestors were manhandled off the site and kept behind a police barricade of 15 officers.

The protest was kept off the premises and the Tories gathering inside were only slightly disturbed by the banging of drums.

Extinction Rebellion activists were later joined by campaigners from the Peoples Assembly and Stand Up to Racism who shouted slogans aimed at Britain’s cost of living crisis.

Earlier Mr Sunak came outside the building to rally his troops and raise a cheer for former Tory leader Michael Howard who is supporting his leadership campaign.

Meanwhile, Ms Truss sneaked in through a side door after being deposited outside by a black Range Rover. 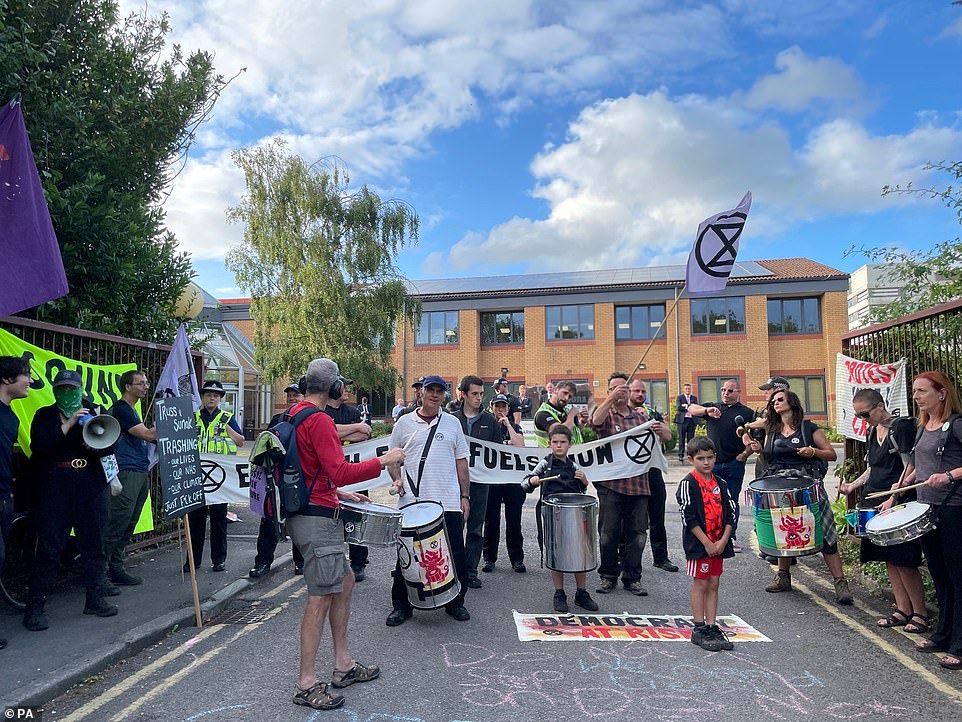 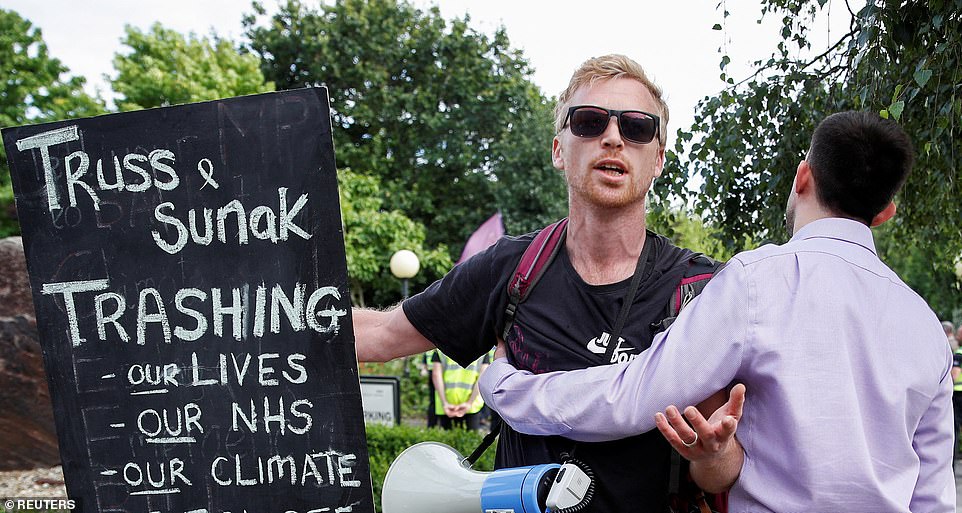 Protester holds up a sign accusing Sunak and Truss of ‘trashing our lives, our NHS, our climate’ 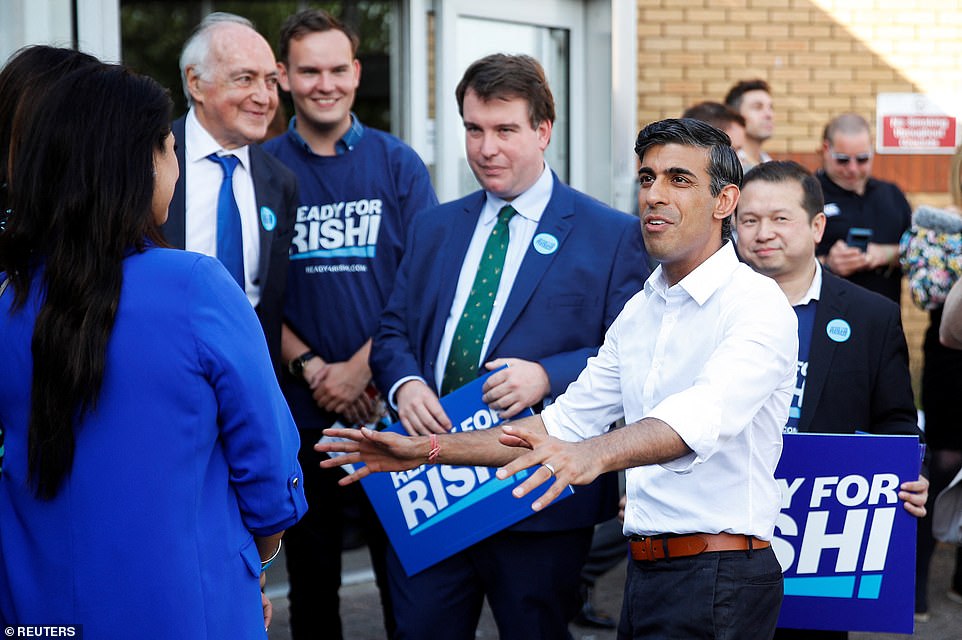 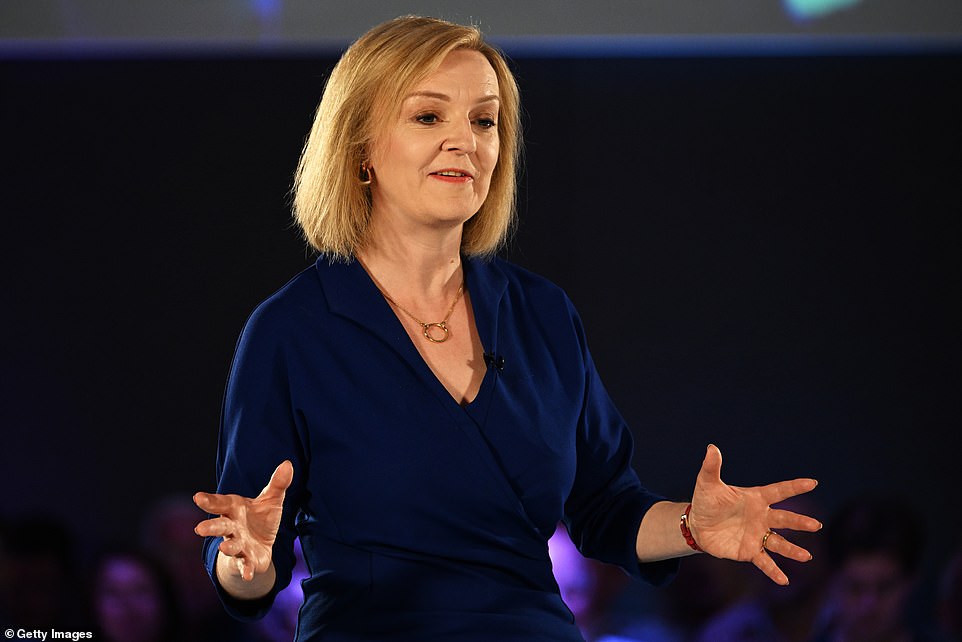 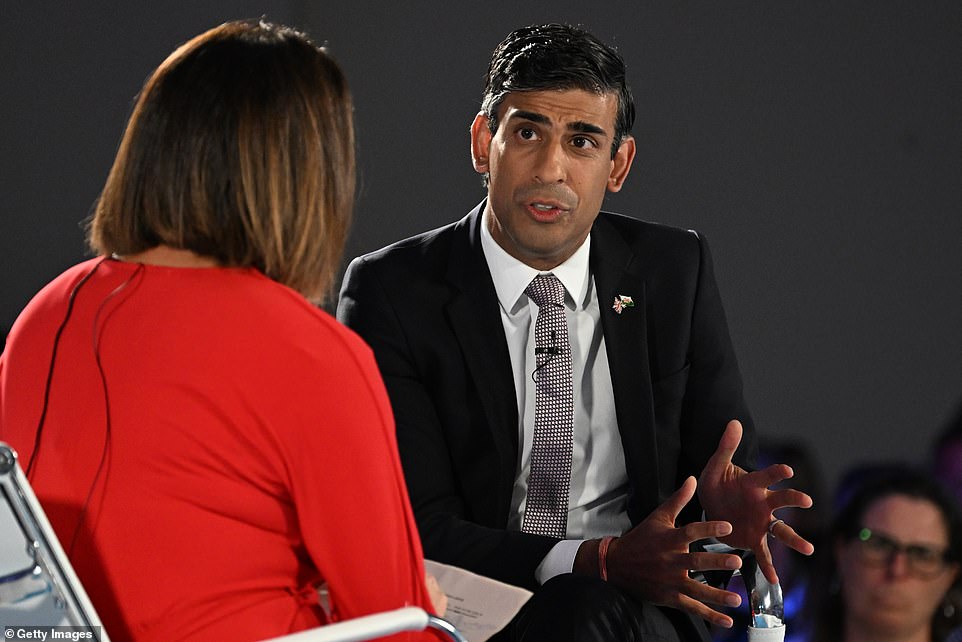 Former Chancellor to the Exchequer Rishi Sunak speaks during a Conservative party membership hustings at the All Nations Centre on August 3, 2022

The protestors said they took ‘equal issue’ with both candidates.

Extinction Rebellion Cymru spokesperson David France said: ‘Neither is up to the job. We are choosing between heating and eating despite record profits for oil and gas companies, all while flooding and wildfires rage across the planet.

‘Neither of these unelected Prime Ministers would give us anything other than more of this suffering for everyday people’.

Peter Booth, chairman of the National Convention, opened the hustings making a joke about the protests.

He told the crowd: ‘It’s good to be here in Wales. Thank you all for attending this evening. And it’s great to see so many friends and colleagues in the audience.

‘And thank you all of you for braving Extinction Rebellion outside.’

Police probing if robbers thought €100,000 was in killed Brit's home

As we tear down the Covid wall, we see our ruling class being caught short – The Sun

Pictured: Woman, 23, who fell from bridge over M62 motorway