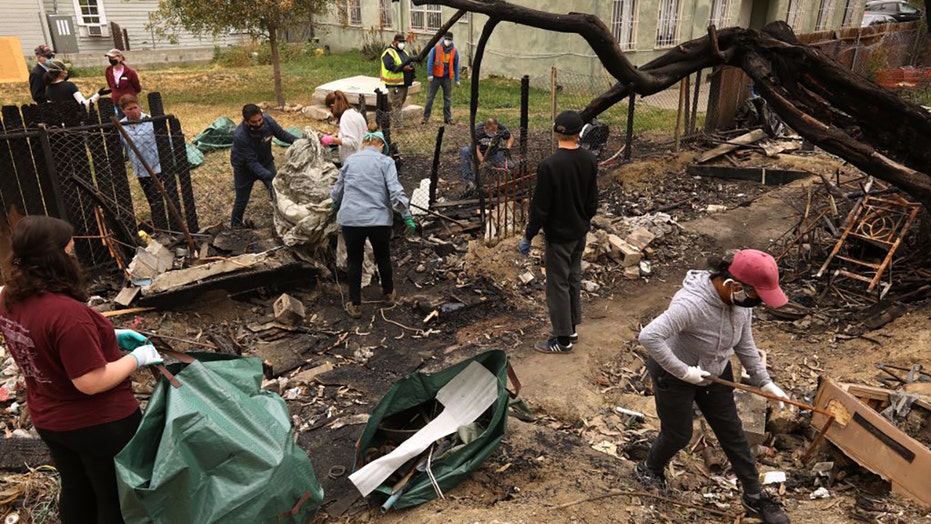 As the homeless crisis in Los Angeles continues to surge, the city is facing a growing number of fires at encampments, according to reports Wednesday.

Fires related to homelessness have nearly tripled in the three years since the Los Angeles Fire Department started classifying them, LAFD officials said.

In the first quarter of 2021, they occurred at a rate of 24 a day, and made up 54% of all blazes the department responded to, the Los Angeles Times reported.

Residents living on a portion of 20th Street clean up debris that burned in a recent fire at a homeless encampment behind their homes in Los Angeles on April 24, 2021. (Genaro Molina / Los Angeles Times via Getty Images)

The increase in fires comes as the number of tents, makeshift shelters, and campers in Los Angeles has also surged. With more tents, comes more heaters and propane tanks used for cooking, FOX 11 of Los Angeles reported.

Armando Hogan, the deputy chief for operations of the LAFD’s West Bureau, questioned the root cause for the growing number of fires.

“Is it a simple matter of these folks just need a place to go and eat? Is it a bigger matter of individuals having problems within each other in the encampments? Is it just a warming issue?” he said.

“If I can educate them a little bit more on maybe not cooking inside the tent,” Hogan added. “We don’t want to encourage everybody just having open cooking there on the sidewalk, but we’re trying to look at alternatives.”

However, not all fires are accidental.

On May 3, a video showed someone throwing something into a tent at the Venice Beach boardwalk, before it becomes engulfed in flames.

At least seven homeless people died in fires in 2020. Fires ignited near businesses have also caused tens of millions of dollars in damage, according to the Los Angeles Times.

Starbucks says customers modifying drinks is part of the experience