Coronavirus is already having an impact on daily life in the UK, with staycations and yoga classes shelved and even psychic readings held on Skype as Britons try to avoid catching the virus.

Many hotels and holiday lets have seen a dip in bookings as people grow more wary of travelling, while major events from the London Book Fair to university graduations have been hit by a rush of cancellations.

Several offices have seen evacuations, with part of HSBC’s Canary Wharf HQ cleared today after an analyst developed flu-like symptoms and Sony Pictures Entertainment closing its London headquarters over fears one of its staff was exposed.

Nike and Deloitte also shut parts of their offices in the capital for deep cleans yesterday, while an Apple office in Belfast was seen being disinfected by workers in hazmat suits in what the technology giant insisted was a planned operation. 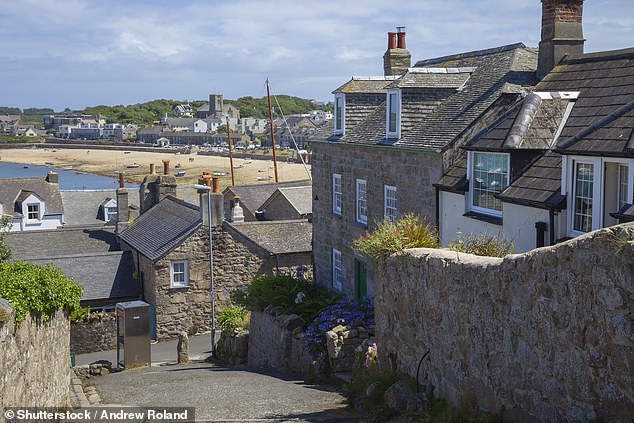 Several holiday companies have seen a decrease in bookings, even for holidays in teh UK. Pictured is a file picture of cottages on the Isle of Scilly

As the number of confirmed UK cases rose to 90, impacts on daily life in Britain include:

The holiday market has been hit by the crisis, with many hotels reporting a decrease in bookings and Britons even ditching breaks within the UK.

Sarah Jarvis, from Independent Cottages, which offers a portfolio of independently-owned holiday lets, said a sharp increase in booking enquiries in February has been followed by a decrease this month as Britain saw more coronavirus cases.

‘We’ve seen a slight downturn in that growth to just under 10%, with fewer people searching for self-catering holidays in the UK,’ she told MailOnline.

‘On the other hand a high number of booking enquiries are still coming through (just not quite as high as it was).

‘Interestingly, these enquiries are almost exclusively made by domestic travellers in the UK; overseas web traffic and enquires have definitely tailed off.

‘I would imagine a fair number of holidaymakers are waiting and see how things progress, so I would expect to see an increase in last-minute bookings over the coming months too.’

… But more bookings for private jets and black cabs

Some businesses have so far seen some benefits from the disruption, including the Air Charter Service, which hires out private jets or bigger planes for business and leisure.

‘Overall, we’ve seen a 15% increase in flights, with a lot of people saying they are flying with us to avoid commercial airlines and mainstream airports,’ James Leach, the company’s marketing director, told MailOnline. 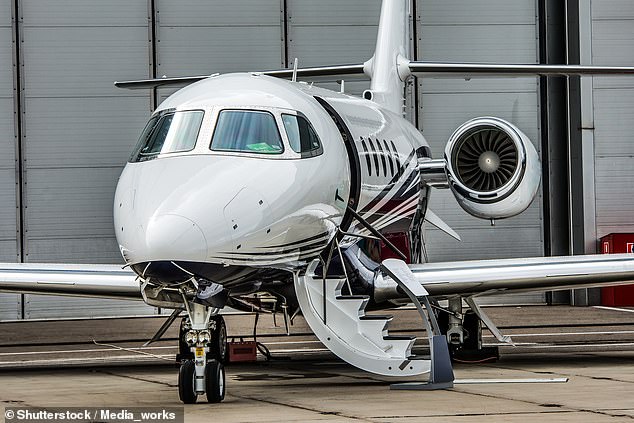 Elsewhere, some businesses have so far seen some benefits from the disruption, including the Air Charter Service, which hires out private jets or bigger planes for business and leisure

‘We’ve also done a couple of evacuation flights for British customers. But we’ve also got people not taking trips that they would have taken and staying at home.

‘We expect a further increase in March but it is too early to say. We’re waiting to see if this rush of new clients looking to fly private – some of whom have never done so before – is going to outweigh those who aren’t going to fly at all.’

There is also evidence that black cab drivers are seeing an increase in bookings, as passengers shun public transport for the perceived benefits of travelling alone with a screen keeping the driver at safe distance.

A spokesman for the Licensed Taxi Drivers Association told MailOnline: ‘We’ve seen black cab drivers taking an increase in fares due to the partition that exists compared to other vehicles. I think passengers see it as more secure.’

HSBC today evacuated part of its UK headquarters after a worker tested positive for coronavirus in the first known case at the heart of London’s financial district.

Staff who came into contact with the analyst were told to work from home as the company’s research department underwent an urgent deep clean.

The office is in the centre of Canary Wharf, a major financial centre that hosts many investment banks, including Citi, JPMorgan, Morgan Stanley and Barclays. 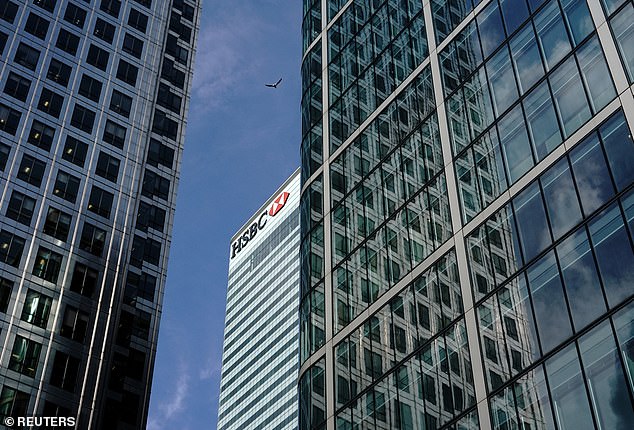 Several other offices have already been evacuated over coronavirus fears, with Sony Pictures Entertainment shutting its London headquarters over fears one of its staff had been exposed to the infection.

Deloitte also evacuated parts of their offices in the capital for a deep clean yesterday after a worker tested positive since returning from Asia, while a similar closure happened at Nike.

Meanwhile, an Apple office in Belfast was yesterday seen being disinfected by workers in hazmat suits, in what the technology giant insisted was a pre-planned planned operation.

The downturn in trade is hitting some businesses hard, including Pied a Terre, a Michelin-starred restaurant in central London.

Its owner, David Moore, told The Telegraph: ‘We have seen lots of cancellations for the next couple of weeks, it’s kind of scary. People aren’t coming out, I usually have 12 tables for lunch – today I had two.’

However, other businesses said they had seen less of an impact.

Stockley Park Golf Club, which hosts weddings and other large catered events at its base in Uxbridge, west London, said it had not noticed any major change in bookings. 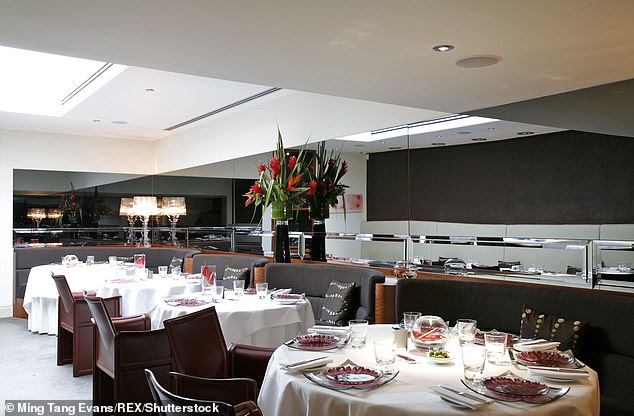 The downturn in trade is hitting some businesses hard, including Pied a Terre, a Michelin-starred restaurant in central London. File photo 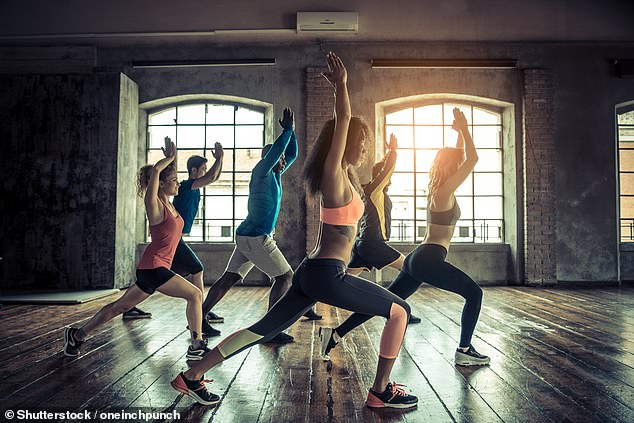 The London Book Fair has been cancelled over fears it could help boost the spread of coronavirus.

Reed Exhibitions said the event scheduled for March 10 to 12 at London Olympia would not take place, partly due to attendees struggling to reach the UK from abroad.

‘The effects, actual and projected, of coronavirus are becoming evident across all aspects of our lives here in the UK and across the world, with many of our participants facing travel restrictions,’ the company said in a statement.

Other major events like the London Marathon on April 26 are thought to be under threat. 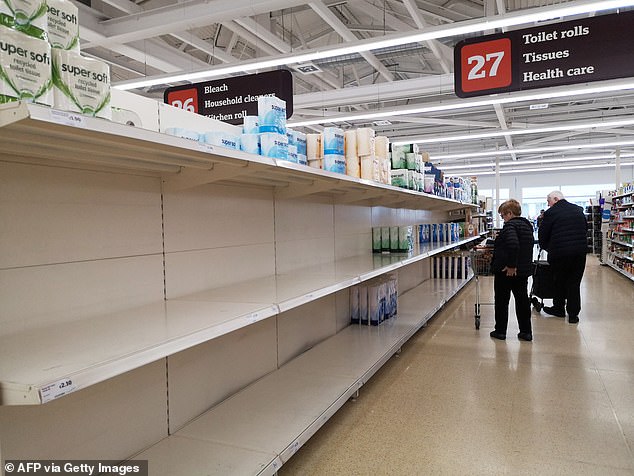 Supermarkets have perhaps been most affected by the crisis, with panic buyers stripping shelves of certain essentials despite repeated official warnings such measures are not necessary.

Pictures show empty aisles as sections for hand soap and disinfectant, nappies and baby wipes as well as dried goods such as pasta and rice are cleared.

Firms have ramped up production and are working at ‘full capacity’ to ensure shelves can be re-stocked as analysts predict retailers ‘will keep the country fed.’

Retailers are even considering rationing household essentials such as toilet paper in response to panic buying, with some shoppers spending £900 online.

Funerals and psychics on Skype

The impact of coronavirus has even been felt in the spirit world, with one medium reporting a decline in customers wanting to see them face to face.

‘It’s harder to feel psychic energy through Skype, certainly,’ a spokesman at The Mystery Chest in Harlow told The Telegraph. 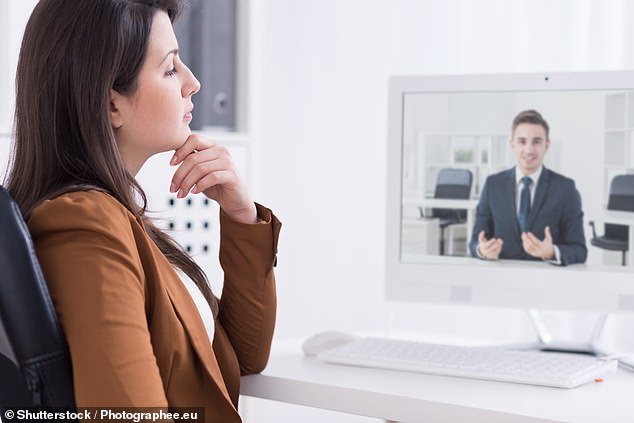 It also emerged today that funerals for coronavirus patients could be streamed online to stop more people becoming infected in a pandemic.

Mourners could be encouraged to watch online instead of attending the gatherings where the virus could be spread.

The National Association of Funeral Directors said arrangements for cremations and burials might also need to be adapted if there is a mass outbreak.

Worker, 34, killed and another injured after cherrypicker struck overheard power cable in Devon – The Sun