Victoria, NSW and Australia as a whole appear to be well on track to exceed 80 per cent vaccination rates and perhaps push towards 90, an unexpected development that will have major implications for the way the country lives with COVID-19.

The country’s slow initial rollout, combined with the emergence of side-effects linked to AstraZeneca’s jab, has led to months of speculation Australia might face a major vaccine hesitancy problem.

That has not come to pass. More than 80 per cent of Australian adults have now been vaccinated at least once, with Victoria reaching 84 per cent on Friday and NSW almost at 90 per cent. 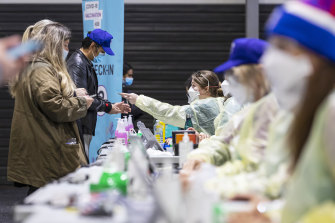 People check in at a vaccination hub at Whitten Oval on October 02, 2021 in Melbourne.Credit:Getty Images

The speed of the uptake has surprised everyone, and is credited as a major reason for NSW avoiding a predicted overwhelming of its hospital capacity.

“I had predicted we’d be lucky to get 60 per cent two-dose coverage for over 16s by the end of the year. That was before the Delta outbreaks took hold. I said I would be happy to be wrong: and I was so wrong,” said University of Sydney leading vaccine hesitancy researcher Professor Julie Leask.

“Looking at the current trajectories, particularly in NSW and Victoria, I am increasingly confident we could reach a coverage level of 90 per cent for two doses.

“Australia is a very pro-vaccination country. You look at our support, our coverage rates for kids, and you see a lot of willingness – almost a fierceness in defending vaccination.”

Doherty Institute modelling, commissioned by the national cabinet and released in July, assumed Australia would eventually reach a vaccination rate around 90 per cent – however, the pace has substantially exceeded their projections.

The institute predicted Australia would manage a little over 1 million doses a week until mid-September, rising to 1.5 million doses in October, before peaking just below 2 million weekly doses in late October.

Instead, Australia managed to reach the 1.5 million mark in mid-August, hitting more than 2 million doses a week by late September. Some 1.8 million doses were handed out last week.

“It’s the timing: greater supply and Delta coming at a similar time, flipping that balance of risk and benefit with that vaccine with the outbreaks, the changed ATAGI recommendations, the increased confidence from providers: all those things have helped us increase our rate of vaccination,” said Professor Leask.

There are several causes. First, the number of people saying they are unlikely to get a jab has plunged to record lows, from 29 per cent in May to 9 per cent in September, per The Age’s Resolve Political Monitor.

Liam Mannix’s Examine newsletter explains and analyses science with a rigorous focus on the evidence. Sign up to get it each week.

Third, supply. Australia secured an extra million doses of Pfizer from Poland in mid August, and another 4 million from the UK in September.

The unforeseen increase in pace of the rollout was credited by NSW Health with keeping the state’s hospitalisation and ICU numbers much lower than predicted.

Vaccination is also slowing Victoria’s outbreak – although that is being counteracted by increasing levels of population mixing.

Victoria’s transmission potential has been reduced by 25 per cent by vaccination so far, said Professor James McCaw, who supplies modelling to the federal government, while NSW had been cut by 35 per cent.

“Those effects in both states will be much larger within a few weeks as second doses increase.

“The transmission potential has remained fairly steady – it just so happens that over the past few weeks the small reduction due to vaccination has balanced out by the small increase due to more mixing.”

Australia has managed to vaccinate 67 per cent of its entire population, including children – good for 18th in the world. Of countries with populations over 20 million, Australia ranks 13th, just behind the UK and ahead of the USA.

How much does reaching 90 per cent over-12 vaccination, compared to 80 per cent, matter?

Quite a lot. It cuts hospitalisations per million people from 1162 down to 682, according to modelling by Professor George Milne of the University of WA – a 41 per cent drop.

Add in social distancing measures and other restrictions, and you cut that to just 329 people.