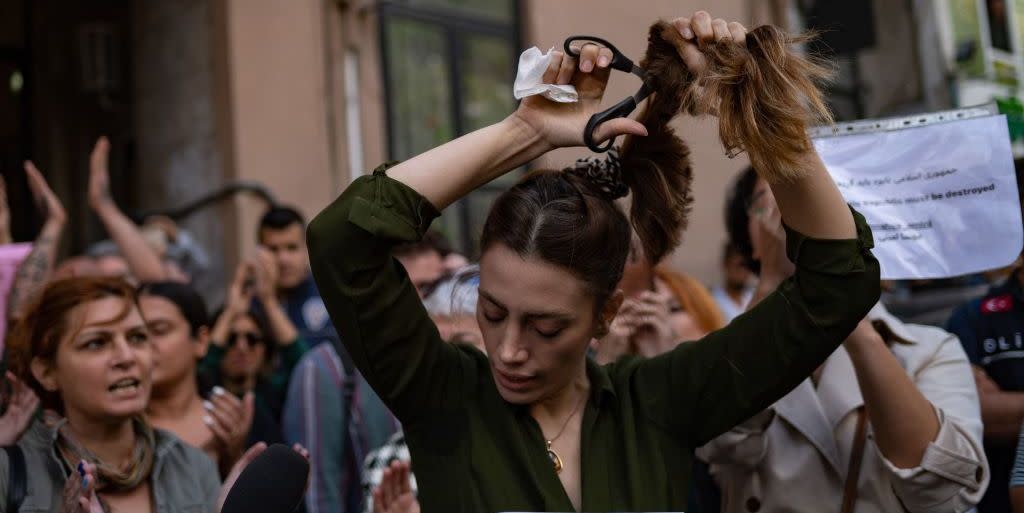 Iranian women are protesting the death of one of their own, Mahsa Amini.

Amini, a 22-year-old local journalist, died on Friday, three days after being arrested by Iran’s morality police. The police are in charge of enforcing the country’s strict dress code mandates for women, including wearing a hijab in public to cover one’s hair and neck.

Amini was taken to the Vozara Street Detention Center Tuesday to be educated about the hijab, Tehran Police said, per CNN. But while in custody, Amini collapsed and was taken to the hospital, where she later died. Local police claimed she suffered a heart attack, while her family said she had no prior heart conditions.

During a news conference on Monday, Greater Tehran Police Commander Hossein Rahimi denied claims that Iranian police harmed Amini in any way, and said they had “done everything” to keep her alive. He called her death “unfortunate.”

Since Amini’s death, protests have broken out across Iran, with women standing up against the morality police by chopping off their hair, removing and even burning their hijabs in public, and dressing up as men to fight the officers.

Videos on social media show women running through the streets of Tehran, as well as more conservative cities, like Mashhad and Kermanshah, putting on flash protests and shouting, “Women, life, freedom.”

Some are even setting fires and destroying posters with images of Iran’s Supreme Leader, Ayatollah Ali Khamenei.

Women of Iran-Saghez removed their headscarves in protest against the murder of Mahsa Amini 22 Yr old woman by hijab police and chanting:

Removing hijab is a punishable crime in Iran. We call on women and men around the world to show solidarity. #مهسا_امینی pic.twitter.com/ActEYqOr1Q

Meanwhile, internet monitoring website Netblocks has documented internet outages in the country since Friday—a tactic the local government has previously used to minimize the spread of protests.

Amini’s death comes amid growing controversy and pushback over the dress code for women—which is enforced since they turn nine years old and applies to people of all nationalities and religions living in the country, not just Iranian Muslims.

Our democracy has been corrupted by money

Myanmar military denies it was threatening a coup

Counting sleep not sheep? There’s a word for that