NSW Labor MP Tania Mihailuk has been sacked from shadow cabinet after using parliamentary privilege to launch an attack on her own party on Tuesday night.

In an extraordinary late-night speech made to parliament, Mihailuk accused Canterbury-Bankstown mayor Khal Asfour of being linked to corrupt former minister Eddie Obeid.

Asfour is a Labor candidate on the party’s upper house ticket for the March election.

In her speech, Mihailuk, the MP for Bankstown, told parliament it would be a disastrous outcome for the party if Asfour remained on the ticket and said it left her no option but to launch an attack on her own party.

Speaking on 2GB on Friday morning, Labor leader Chris Minns revealed he had informed Mihailuk that her position in the shadow cabinet had become untenable.

“I’ve spoken to Tania Mihailuk and said that she cannot stay in the shadow cabinet and launch political attacks by parliamentary privilege,” he said. 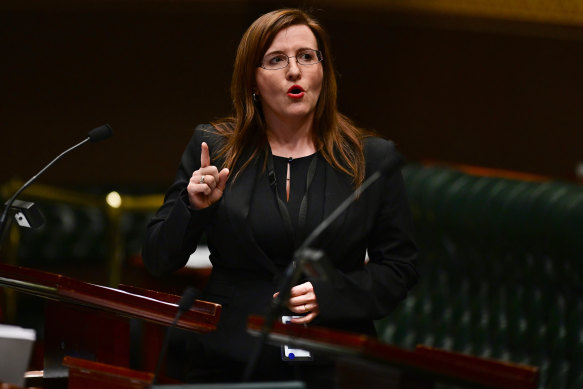 “There are correct ways of presenting information about potential or alleged illegal conduct and using parliamentary privilege at 11.30 at night in the NSW parliament is not one of them,” he said.

There has been bitter infighting within Labor over preselection in Sydney’s south-west because boundary redistributions have seen the abolition of the seat of Lakemba, forcing Labor MPs, including Mihailuk, to shift seats.

Asfour hit back at Mihailuk’s fiery accusations on Wednesday by labelling her attack as “gutless” and a slur on his good reputation and standing in the community. He said it “reeks of sour grapes at being overlooked on Labor’s upper house ticket”.

“I challenge her to repeat those outrageous and unsubstantiated claims outside the Parliament”, Asfour said.

“She has used parliamentary privilege to launch a cowardly attack on me and my family and I call on her to produce evidence of any wrongdoing to the relevant bodies.”

Apart from his friendship with the twice–jailed former powerbroker Eddie Obeid, Asfour previously raised eyebrows over his former dealings with Bechara Khouri, a controversial Labor Party “fixer” who has been on the payroll of a number of developers to act as a lobbyist.

Mum's heartbreaking bid to extend her life for son, six, after she was diagnosed with terminal brain tumour