Home » World News » 'This didn't feel like a time to ask permission': After Texas school shooting, students walk out for gun law reform

When Maddie Ahmadi, 17, got home Tuesday afternoon and heard the news of the Uvalde, Texas, school massacre, she knew she had to do something, and she knew she needed to do it quickly.

Ahmadi, a junior at Essex High School in Vermont who serves on the national advisory board of Students Demand Action, decided a walkout was the only option: “Our lives are more important than schoolwork,” she said. Ahmadi blasted out calls to action on social media and notified her school’s administration.

“This didn’t feel like a time to ask for permission,” she said.

The demonstration took place midmorning Wednesday. It became the first of a string of student walkouts across the country in response to Tuesday’s massacre, most of them at noon ET/9 a.m. PT Thursday and largely coordinated by local chapters of Students Demand Action, a youth-led organization that advocates for stronger gun control.

The shooting is just the latest instance in which an armed man entered a school and shot unarmed students. But the deaths of 19 elementary school children and two teachers, the deadliest school shooting since 2012, have generated immediate public blowback. 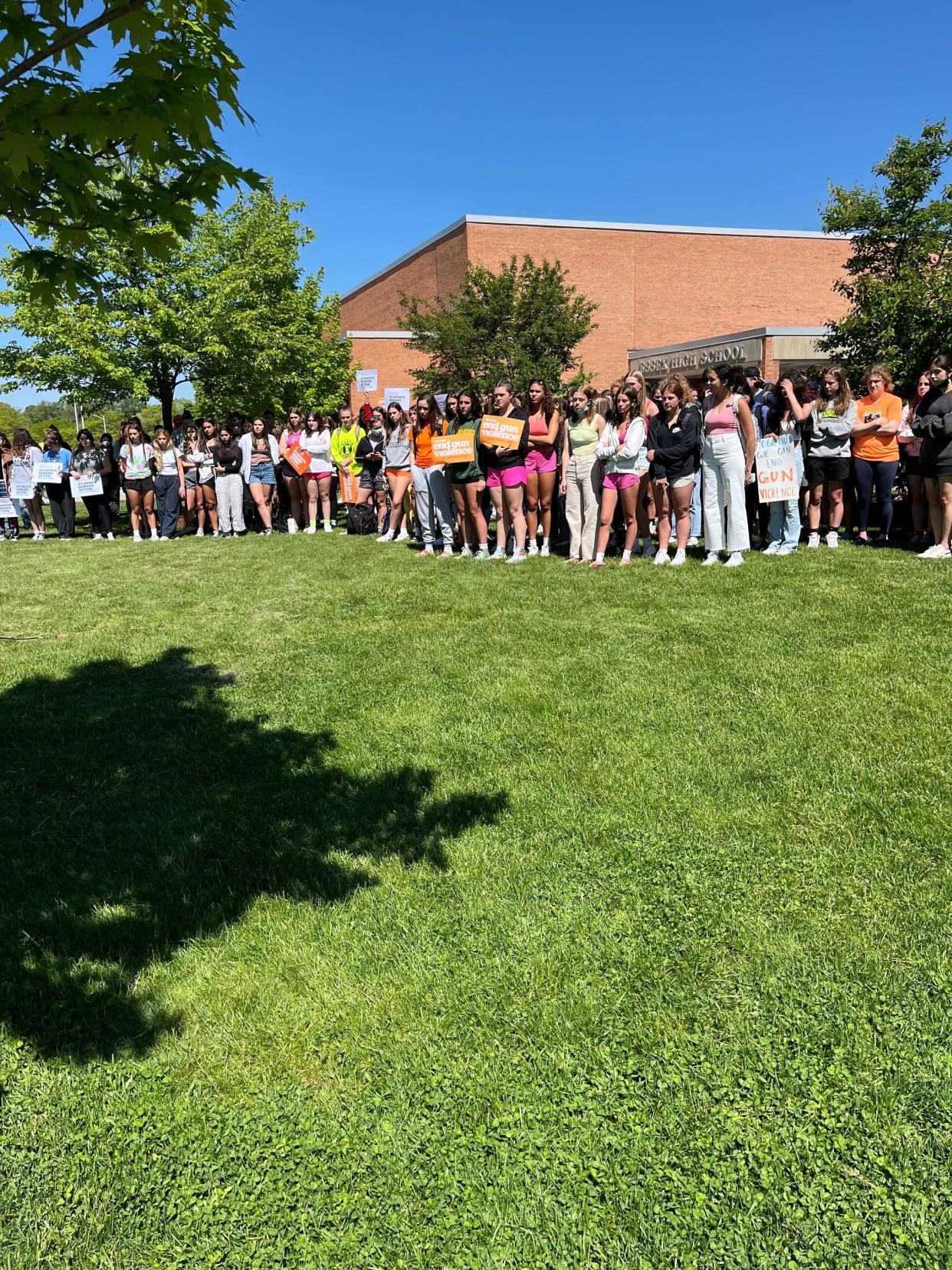 The group that helped organize the demonstration said their action was a response to the continued lack of action from lawmakers to prevent future mass shootings.

“School is the last place where kids should have to worry about gun violence, but thanks to our weak gun laws and the gun lobby’s relentless ‘guns everywhere’ agenda, nowhere is safe,” Students Demand Action wrote. “Students deserve to learn and live without fear.”

Students at more than 200 schools in at least 34 states plus the District of Columbia walked out in response to the Uvalde massacre, according to the gun control advocacy group Everytown for Gun Safety, the parent organization of Students Demand Action.

The walkout bears familiarity to the March for Our Lives, a student-led protest in Washington, D.C., with local actions throughout the country, following the shooting at Stoneman Douglas High School in Parkland, Florida, that left 17 students dead in February 2018.

‘Always focused on doing more than just thoughts and prayers’

In Vermont, Ahmadi estimated that a couple of hundred students participated, in addition to teachers, administrators and even the district’s superintendent.

The turnout was “so much better than I could’ve ever imagined,” Ahmadi said.

That’s a sign of mounting frustration over – and recognition of – the nation’s failure to confront its gun violence epidemic, she said.

“After tragedy, and after mass shootings, we do see people wake up and come together and begin to fight and act,” Ahmadi said. “But to be honest with you, that goes away.”

After a couple of weeks, society seems to forget and move on, she said – until the next shooting happens. Then the process repeats itself.

“That’s the honest truth that I don’t think we’ve talked about before the shooting in Texas,” Amahdi said. “I don’t think we as a country have been honest with ourselves about how we respond to these situations and how we take action, because it’s usually very short-lived action.” 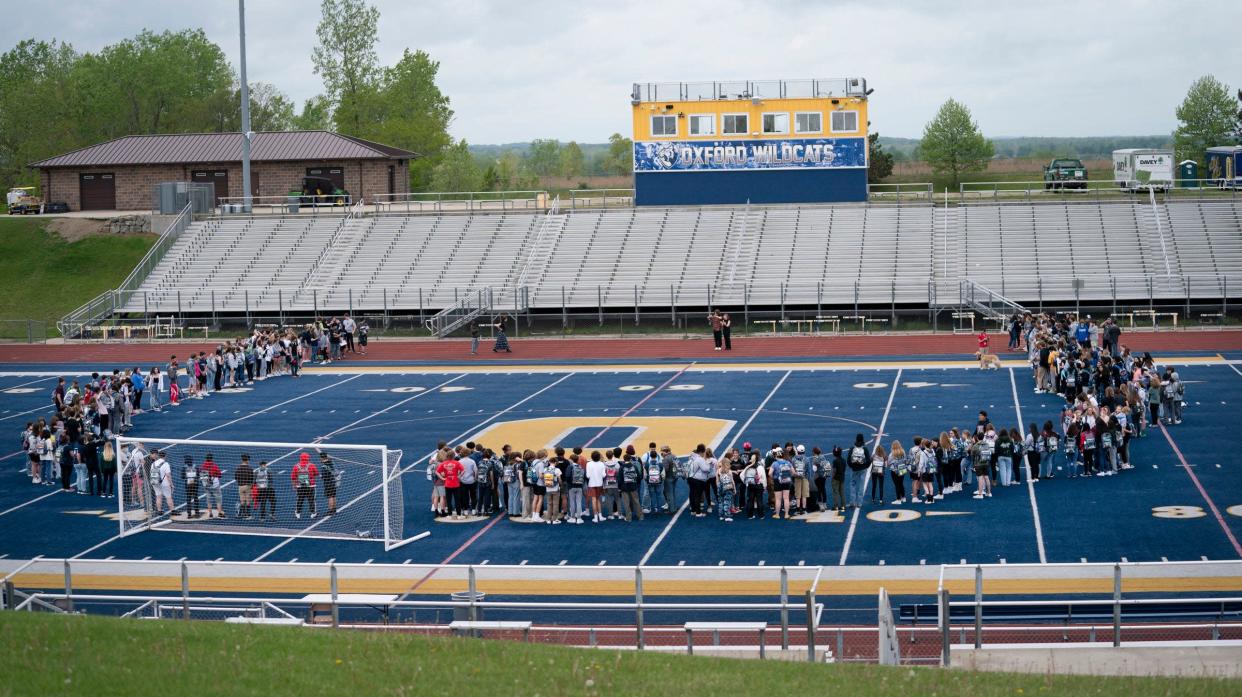 At Oxford High School in Michigan, students left their classrooms and gathered on the football field. That school had experienced its own mass shooting in November that left four students dead.

A spokeswoman for Oxford Community Schools, Dani Stublensky, said the community supports those in Uvalde and that they “understand why some of our students chose to participate in the national walkout.” She added the district worked with local law enforcement to ensure the safety of students participating in the event.

At the El Camino Real Charter High School in California, about 500 students left class and marched around their campus, according to students in the local chapter of Students Demand Action. They were specifically calling for laws to address gun violence.

Students at the California high school said they felt it would fall to their generation to effect long-term change around gun laws. And Peri Bobrosky, a senior, said she wanted to become an elementary school teacher.

“I shouldn’t have to be scared for my future to be teaching and worried that the little kids … that they’re not going to be able to go home to their families or I won’t be,” Bobrosky said.

At Green Level High School in South Carolina, hundreds of students filled the bleachers. Individual students then took turns reading reflections and other thoughts related to the shooting.

Rebecca Cody, a senior, helped to organize the event. She was not affiliated with Students Demand Action, but she had seen their posts on Instagram, which spurred her to action. She was pleased that the school’s administration worked with her, and she was able to announce the action on the school announcements.

A Large Number of Our Students Walked Out if Class Today At 12:00pm To Demand Change. One Young Lady Just Read The Names of The 19 Elementary School Students Who Were Killed On Tuesday. I’m Proud of These Young Leaders & Hopeful Their Generation Can Enact Positive Change. (1/2) pic.twitter.com/cxB31hc8PP

Cody said the turnout surprised her, as did the willingness of her peers to talk about how the shooting affected them. The walkout was almost as much a demonstration as it was a coping mechanism.

“Honestly, it scares us as people who are in the public school system,” Cody said. “It’s scary that we don’t know if this could happen closer to us or to someone we know. We need to be there for each other for sure.”

In Vermont, the vast majority of gun-related deaths are suicides, so tackling that is a top priority of Amahdi’s Students Demand Action chapter. Among their causes: advocating for secure firearm storage, which research suggests can help to prevent youth suicides.

“We organized this walkout in 10 hours,” she said. “We chalked the entire front of our school with messages of action and support and hope. We are always focused on doing more than just thoughts and prayers.”

And these may not be the last student protests the nation sees.

David Hogg, a gun control activist and survivor of the 2018 massacre in Parkland said in a tweet that high schoolers this fall should draw a page from environmental activist Greta Thunberg’s playbook and have walkouts every Friday.

“I can’t call for this as I’m not in high school anymore, but just an idea,” tweeted Hogg, who helped organize the March for Our Lives demonstrations in response to the Parkland shooting. The weekly walkouts should happen,Hogg said, “until all kids and adults are safe in their schools and communities.”

When Ashley Castillo, 17, was in middle school, her teacher threatened to mark her absent if she skipped class to participate in the local March for Our Lives demonstration She attended the protest anyway.

Now a junior, the Students Demand Action leader immediately decided to organize a walkout. All they got after Parkland were “senseless thoughts and prayers,” she said, and “nothing’s changed.” Castillo attends Hollywood High and lives in South Central, Los Angeles, where gun violence is prevalent. She’s had several gun scares and lockdowns at school.

What has felt different this week was the energy at Thursday’s walkout, which according to Castillo drew virtually all her school’s 1,000+ students, as well as many teachers and staff.

“The whole school was involved – everyone was 100%,” Castillo said. “We just want to feel safe on campus.”

This article originally appeared on USA TODAY: Students protest gun laws across US after Texas shooting

Europe wants to compete with the big boys of tech