Toppling of Colston was ‘public art’: Screenwriter blasted for her ‘hatchet job’ Churchill biopic likens BLM mob tossing slaver statue into harbour to a pageant… and says UK ‘can do better’ than building memorials to individuals

The toppling of the statue of slave trader Edward Colston during Black Lives Matter protests in 2020 was a form of ‘pageant’ and ‘public art’, a historian behind a ‘hatchet job’ Churchill biopic has claimed.

The statue was pulled down in Bristol during a wave of protests across the world following the murder of black man George Floyd in the US.

After being toppled, the figure of Colston was daubed with red paint, rolled through the streets and then pushed into the Bristol’s docks.

Colston had been the deputy governor of the Royal African Company, which shipped around 80,000 slaves from Africa to the Caribbean and America during his tenure.

The four campaigners who played a key role in the statue’s destruction were later acquitted of criminal damage in a landmark court case that sparked fury among critics.

But, speaking at the Chalke Valley History Festival, which is sponsored by the Daily Mail, Alex von Tunzelmann, the author of book Fallen Idols: Twelve Statues That Made History, failed to criticise the topplers and instead said they had carried out a ‘form of public art’.

Two protesters kneeled on the neck of the statue to echo the way in which Floyd was held down by police officer Derek Chauvin before his death and then dragged the statue through Bristol’s streets before throwing it in the harbour.

Ms von Tunzelmann said the dragging through the streets was a ‘public process of humiliation’, whilst the plunging into the water was a ‘deliberate recording of the 19,000 slaves who died specifically aboard Colston’s ships and then were thrown into the sea’.

The historian also criticised the notion of erecting statues at all – even those of female and non-white historical figures.

‘Even if you substitute a woman or so on, really you are still coming back to these assumptions that history is caused by a great and powerful individual. I think we can do better than that,’ she claimed.

Ms von Tunzelmann was the screenwriter on a film about hero wartime Prime Minister Winston Churchill that was slammed as a ‘hatchet job’.

The film, titled Churchill, which starred Succession actor Brian Cox in the lead role, was condemned as a vicious character assassination. 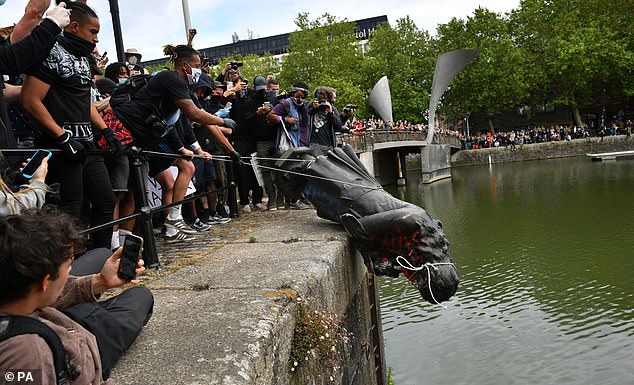 The toppling of the statue of slave trader Edward Colston during Black Lives Matter protests in 2020 was a form of ‘pageant’ and ‘public art’, a historian has claimed. Above: The moment the statue was pushed into Bristol docks after being topppled 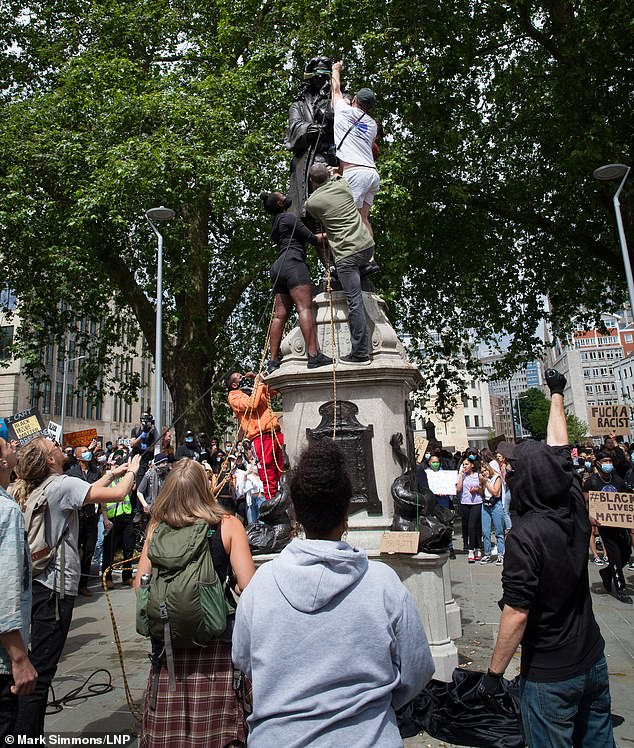 The Colston statue was toppled in June 2020 amid a wave of protests in the UK, the US and elsewhere.

The statue of Winston Churchill outside Parliament was also daubed with graffiti branding the former PM a racist, leading to it being covered up to prevent further damage.

In January, four protesters who took part in the toppling of Colston’s statue – Rhian Graham, Milo Ponsford, Sage Willoughby and Jake Skuse – were cleared by a jury of criminal damage at Bristol Crown Court.

However, Ms von Tunzelmann said: ‘The pulling down itself was actually a rather interesting form of pageant.

‘The statue was toppled very easily… it took seconds. It was then covered in graffiti and red paint.

‘But then because of course this was just after the killing of George Floyd in the United States, the event that had triggered these protests.

‘It was then dragged through the streets in a public progress of humiliation.

‘And finally thrown into the harbour as you can see here, which was a deliberate recording of the 19,000 slaves who died specifically aboard Colston’s ships and were thrown into the sea.

‘So one could say that this form of pageant itself was a form of public art.’

Since the toppling of Colston’s statue, which was later displayed on its side in M Shed Museum in Bristol, the name of the slave trader has been purged from the city.

His name was removed from dozens of schools, concert venues and pubs. 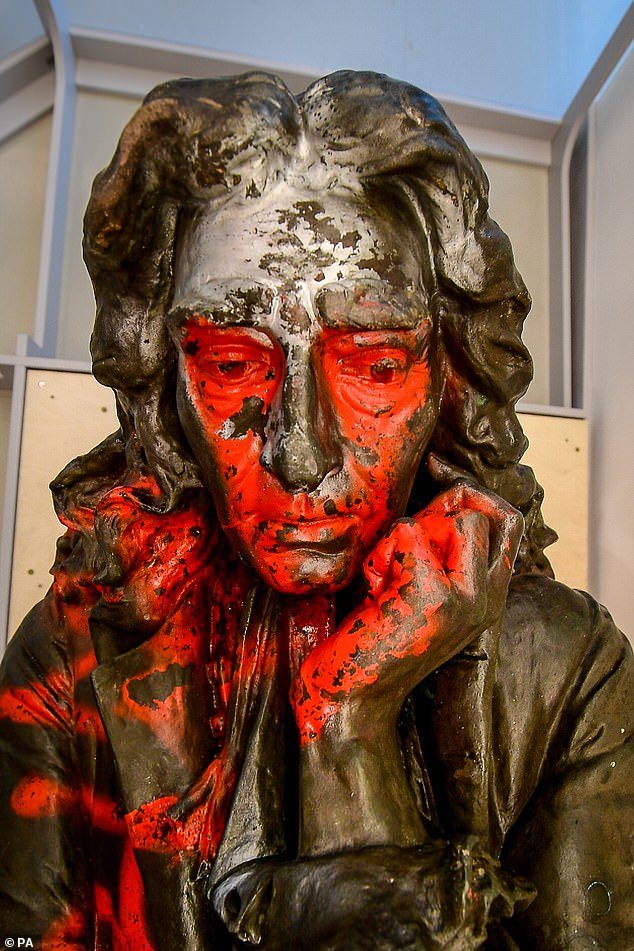 After being toppled, the figure of Colston was daubed with red paint. Pictured: The

One of the first to take action in 2018 was Colston Primary School, which renamed itself Cotham Gardens primary school after the majority of parents, pupils and former students agreed to the change.

In April this year, the £15,000-a-year private school founded by Colston was renamed.

What had been the Colston’s School will become ‘Collegiate’ from September. Its governors denied the move was an attempt to change or deny history.

Criticising the notion of putting up statues, Ms von Tunzelmann added: ‘I think statues themselves can actually be part of the problem.

The 2017 film about Churchill charted events leading up to D-Day, the Allied invasion of Europe that began on June 6, 1944. 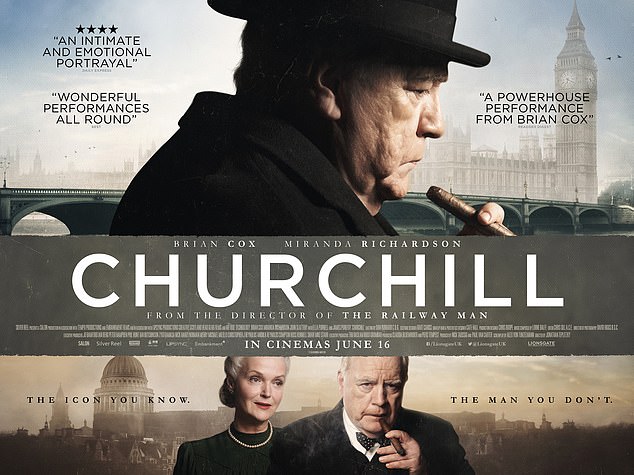 Ms von Tunzelmann was the screenwriter on a film about hero wartime Prime Minister Winston Churchill that was slammed as a ‘hatchet job’. The film, titled Churchill, which starred Succession actor Brian Cox in the lead role, was condemned as a vicious character assassination

It sparked uproar for suggesting that an ill-tempered Churchill opposed the landings that led to the liberation of Europe.

Historian Andrew Roberts, who wrote a bestselling biography of Churchill, said at the time: ‘The movie is a catalogue of errors which paints an entirely false picture of Churchill.

‘I can’t recall another occasion where a single film has got so much wrong. It’s a hatchet job of the kind the Nazi propaganda machine would have been proud.’

And the visiting professor at the War Studies Department at King’s College, London, quipped: ‘Never in the course of movie-making have so many specious errors been made in so long a film by so few writers.’

Ms von Tunzelmann, who was educated at Oxford, previously wrote a column for The Guardian called Reel History, in which she highlighted Hollywood’s distortion of historical fact in films.

Katy Perry reacts to awkward ex-boyfriend mention on 'Idol': 'I feel like maybe you should Wikipedia me'