Victoria has recorded its 52nd day of no locally transmitted coronavirus cases – but there are now 13 active cases in the state, all in hotel quarantine.

One international arrival tested positive for the virus in the past day, according to the Department of Health and Human Services.

There are 700 Victorian police establishing checkpoints along the NSW border, Health Minister Martin Foley said on Monday morning, as Sydney's cluster grew by another 30 cases on Sunday.

The Victorian government is expecting a final report into its handling of the state's hotel quarantine program to be tabled at 10am.

The state reopened to international travellers on December 7, with mandatory hotel quarantine, and is now ordering anyone from Sydney to quarantine in a hotel for 14 days. 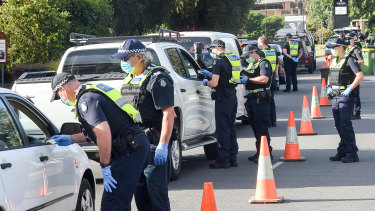 Police are running a checkpoint at the NSW Victorian border in Wodonga for people travelling from NSW.Credit:Justin McManus

Mr Foley told ABC News Breakfast the state's hotel quarantine system was now "perhaps the most rigorous in the country" with a dedicated agency, Quarantine Hotel Victoria, responsible to one minister.

"No contract security guards, a record number of police engaged directly in the security – those interim recommendations from the inquiry have been at the heart of our response," he said.

"We'll wait to see what the rest of the report says today and we'll give it the appropriate and really important consideration that it deserves.

"Victorians need to know that they are safe, whether it be from the hotel quarantine risk or, from the risks in greater Sydney and the Central Coast and that's our focus," Mr Foley said.

"We know that Victorians went through a huge trauma with that second wave and we'll have that report released very shortly. We'll give it the consideration that it rightly deserves and we'll respond to that in the very near future."