Hanoi: The Vietnamese capital was rippling with anticipation ahead of Wednesday evening's scheduled dinner between North Korean leader Kim Jong-un and US President Donald Trump. 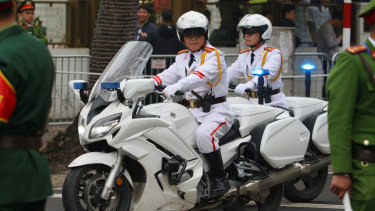 The arrival of Kim's motorcade on Tuesday, which included two armoured personnel carriers mounted with guns, a film crew, ambulance and five SUVs with his security detail, stilled Hanoi's noisy motorcycle traffic on major streets for several hours as road blocks were put in place.

"We are so proud to be welcoming Kim and Trump. Vietnam has a good relationship with both countries," said Dien Thai Thuyn, 50, who was sitting on a small stool street-side sipping coffee with friends, watching Kim's arrival by train to the border town of Dong Dang on a smartphone. 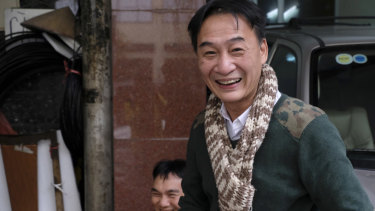 Dien Thai Thyun, 50, a Hanoi local says he is proud of his city hosting such an important meeting.Credit:Sanghee Liu

He later joined the crowd behind a long rope strung across Hanoi marking out the route of Kim's motorcade, many waving the flags of Vietnam, North Korea and the US.

"I hope the meeting goes well," he said.

Banh mi vendors rushed out into streets, sealed off by hundreds of police and wafting with the lunch-time fragrance of lemongrass, to watch the motorcade as Kim arrived at the Melia Hotel. At least 30 vehicles had accompanied Kim's special armour-plated Mercedes Benz for the 170-kilometre journey from the Chinese border to Hanoi.

Trump was due to arrive on Tuesday evening. 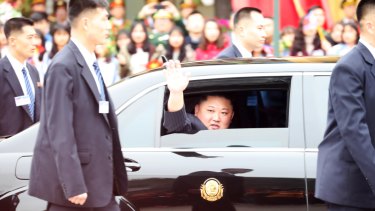 The second summit between the two leaders, scheduled as a series of meetings on Thursday that will attempt to break an impasse in negotiations over denuclearisation, has put Hanoi in the world's spotlight.

Dien said he had heard that Kim was interested in learning from Vietnam's economy. South Korea media has reported Kim may visit a factory. 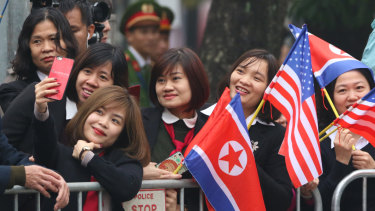 Young Vietnamese pose for a selfie outside the Hotel Melia in Hanoir while waiting for Kim Jong-un.Credit:Sanghee Liu

Unlike the dazzling sights of Singapore visited by Kim last year during his first historic summit with Trump, Vietnam could offer a more realistic model for North Korea to reform its economy and open to the world. But this can only happen if a deal is struck with the US to lift economic sanctions in return for true denuclearisation.

"Vietnam, along with China, is one of a few examples where economic development hasn’t led to political liberalisation. I think Kim Jong-un hopes to get sanctions lifted which would allow him to attract foreign direct investment," she said.

But foreign policy analysts were divided on whether the second summit between Kim and Trump would be successful.

Gordon Flake, chief executive of the Perth USAsia Centre, said: "This issue is not simply that the Singapore summit lacked concrete progress, but that it in fact marked a retreat on almost every front."

He said the four points in the Singapore joint statement had been previously negotiated with greater rigour, but was watered down after Trump talked with Kim and "Trump accepted a North Korea definition of terms which served to undermine international regimes such as the Nuclear Non-Proliferation treaty, the International Atomic Energy Agency Safeguards agreement, and perhaps more importantly, the principle of close coordination and consultation with allies".

In his press conference immediately after their Singapore meeting, Trump stunned allies by saying that joint military drills with South Korea were "provocative" and would be halted.

"Nothing I have seen in the intervening seven months leads me to have greater expectations for results from Hanoi," said Flake. "In fact, President Trump has repeatedly undermined his own negotiators in recent weeks."

In comments and tweets, Trump has praised North Korea for not testing weapons, suggesting he may relax the US demand for full denuclearisation to be complete before any sanctions are relaxed.

There is speculation he may agree to sign a declaration to formally end the Korean War.

"Declaring a peace treaty without any change in North Korea’s position or behaviour can only be seen as another stunning capitulation by President Trump, of deep concern to US allies in the region, and deep concern to countries like Australia," Flake said.

Kim and Trump are expected to hold a series of meetings on Thursday to try to hammer out a deal.

"I expect this meeting to generate a bit more substance than the Singapore Summit that established principles, but the Hanoi summit probably won't satisfy skeptics," Lami Kim said.

"It is possible that the DPRK will agree to dismantle the Yongbyun nuclear facility, which has produced nuclear fissile materials (enriched uranium and plutonium) in exchange for limited sanctions relief and possibly the declaration of the end of the Korean War. This is not a legally-binding peace treaty but a political declaration," she said.

But she doesn't believe North Korea will agree to give up all of its nuclear warheads, materials and facilities in "one go".

The two sides may agree to a schedule for denuclearisation and corresponding steps from the US.

Trump is due to meet Vietnamese President Nguyen Phu Trong on Wednesday morning.

Trump said before leaving the US: “We want denuclearisation, and I think he'll have a country that will set a lot of records for speed in terms of an economy.”

Up to 50,000 pensioners could be pushed below the poverty line