The Platinum Jubilee Weekend: Your guide to how the Queen’s historic celebrations will play out

As Her Majesty The Queen celebrates an unprecedented 70 years on the throne, the country is gearing up for a series of royal events which will rival even that of her Coronation in 1952.

With both large concerts and local events to go to, the celebration will also allow people an excuse to let their hair down after years marked by crises.

The Mail has compiled the best of the weekend’s events, and where you can get involved… 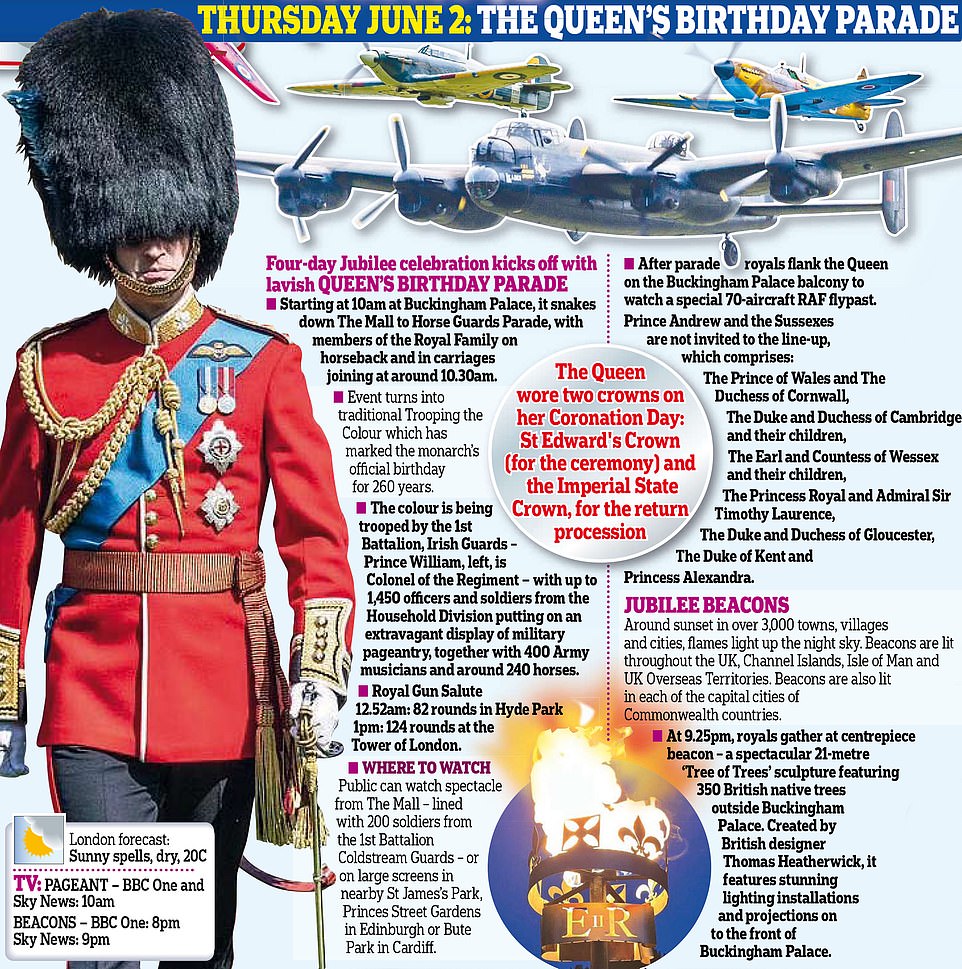 ■ Starting at 10am at Buckingham Palace, it snakes down The Mall to Horse Guards Parade, with members of the Royal Family on horseback and in carriages joining at around 10.30am.

■ Event turns into traditional Trooping the Colour which has marked the monarch’s official birthday for 260 years.

■ The colour is being trooped by the 1st Battalion, Irish Guards – Prince William is  Colonel of the Regiment – with up to 1,450 officers and soldiers from the Household Division putting on an extravagant display of military pageantry, together with 400 Army musicians and around 240 horses.

Public can watch spectacle from The Mall – lined with 200 soldiers from the 1st Battalion Coldstream Guards – or on large screens in nearby St James’s Park, Princes Street Gardens in Edinburgh or Bute Park in Cardiff.

■ After parade, royals flank the Queen on the Buckingham Palace balcony to watch a special 70-aircraft RAF flypast. Prince Andrew and the Sussexes are not invited to the line-up, which comprises: The Prince of Wales and The Duchess of Cornwall, The Duke and Duchess of Cambridge and their children, The Earl and Countess of Wessex and their children, The Princess Royal and Admiral Sir Timothy Laurence, the Duke and Duchess of Gloucester, the Duke of Kent and Princess Alexandra.

Around sunset in over 3,000 towns, villages and cities, flames light up the night sky. Beacons are lit throughout the UK, Channel Islands, Isle of Man and UK Overseas Territories. Beacons are also lit in each of the capital cities of Commonwealth countries. 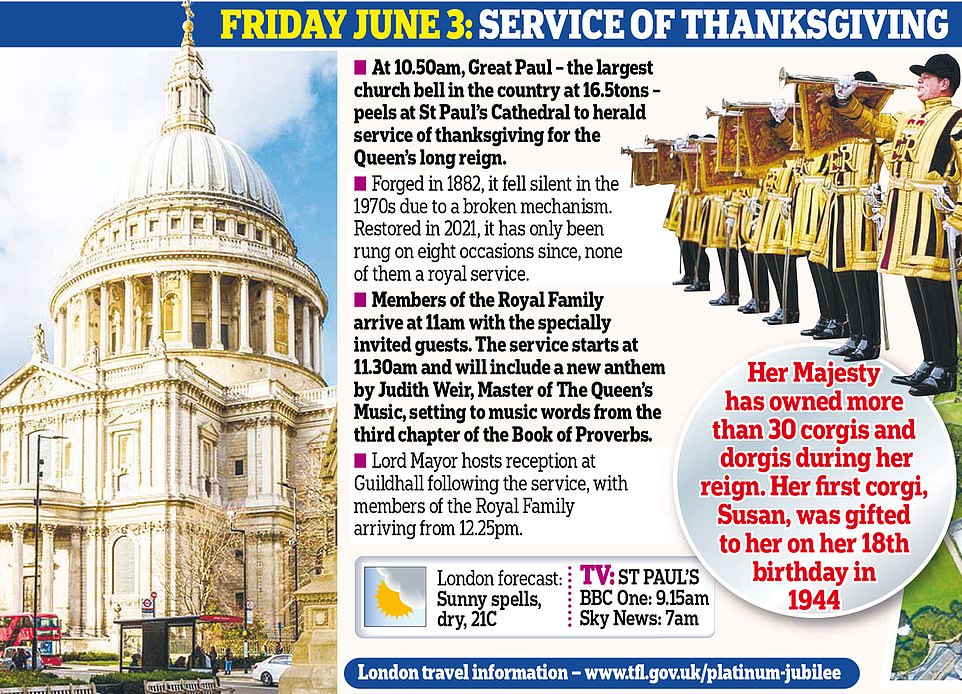 At 10.50am, Great Paul – the largest church bell in the country at 16.5tons – peels at St Paul’s Cathedral to herald service of thanksgiving for the Queen’s long reign.

■ Forged in 1882, it fell silent in the 1970s due to a broken mechanism. Restored in 2021, it has only been rung on eight occasions since, none of them a royal service.

■ Members of the Royal Family arrive at 11am with the specially invited guests. The service starts at 11.30am and will include a new anthem by Judith Weir, Master of The Queen’s Music, setting to music words from the third chapter of the Book of Proverbs.

■ Lord Mayor hosts reception at Guildhall following the service, with members of the Royal Family arriving from 12.25pm. 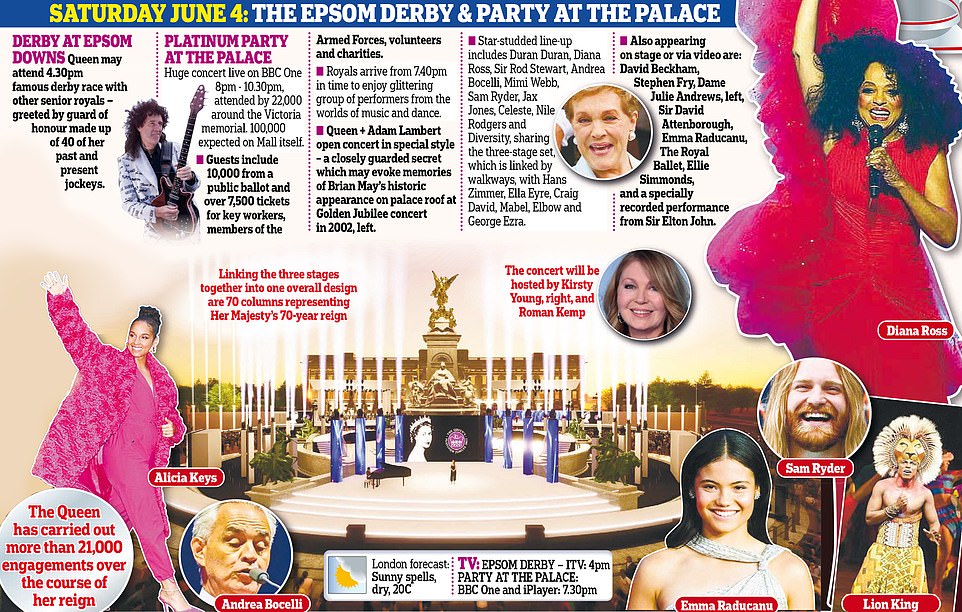 The Queen may attend 4.30pm famous derby race with other senior royals – greeted by guard of honour made up of 40 of her past and present jockeys.

PLATINUM PARTY AT THE PALACE

■ Guests include 10,000 from a public ballot and over 7,500 tickets for key workers, members of the Armed Forces, volunteers and charities.

■ Royals arrive from 7.40pm in time to enjoy glittering group of performers from the worlds of music and dance. 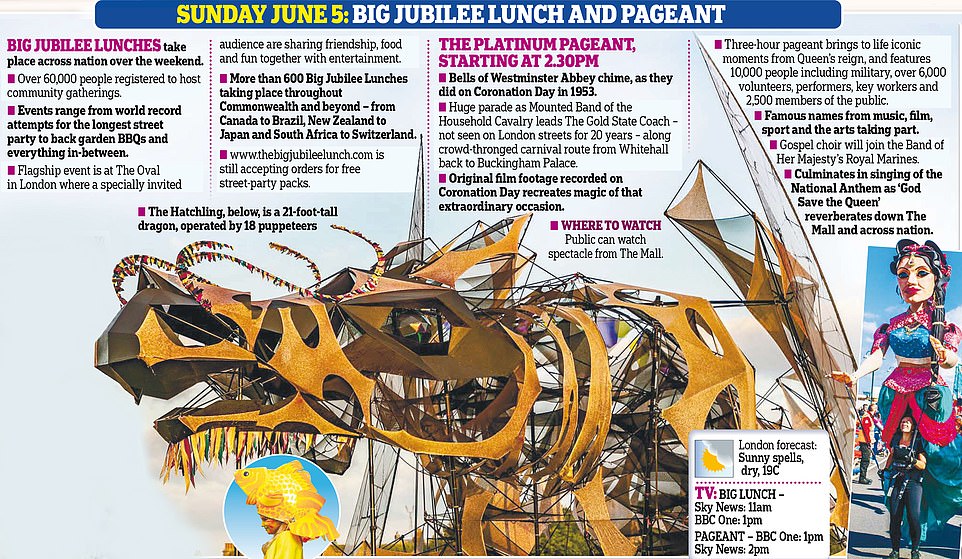 BIG JUBILEE LUNCHES take place across nation over the weekend.

■ Events range from world record attempts for the longest street party to back garden BBQs and everything in-between.

■ Flagship event is at The Oval in London where a specially invited audience are sharing friendship, food and fun together with entertainment.

■ More than 600 Big Jubilee Lunches taking place throughout Commonwealth and beyond -from Canada to Brazil, New Zealand to Japan and South Africa to Switzerland.

THE PLATINUM PAGEANT, STARTING AT 2.30PM

■ Bells of Westminster Abbey chime, as they did on Coronation Day in 1953.

■ Huge parade as Mounted Band of the Household Cavalry leads The Gold State Coach – not seen on London streets for 20 years – along crowd-thronged carnival route from Whitehall back to Buckingham Palace.

■ Three-hour pageant brings to life iconic moments from Queen’s reign, and features 10,000 people including military, over 6,000 volunteers, performers, key workers and 2,500 members of the public.

■ Gospel choir will join the Band of Her Majesty’s Royal Marines.

■ Culminates in singing of the National Anthem as ‘God Save the Queen’ reverberates down The Mall and across nation. 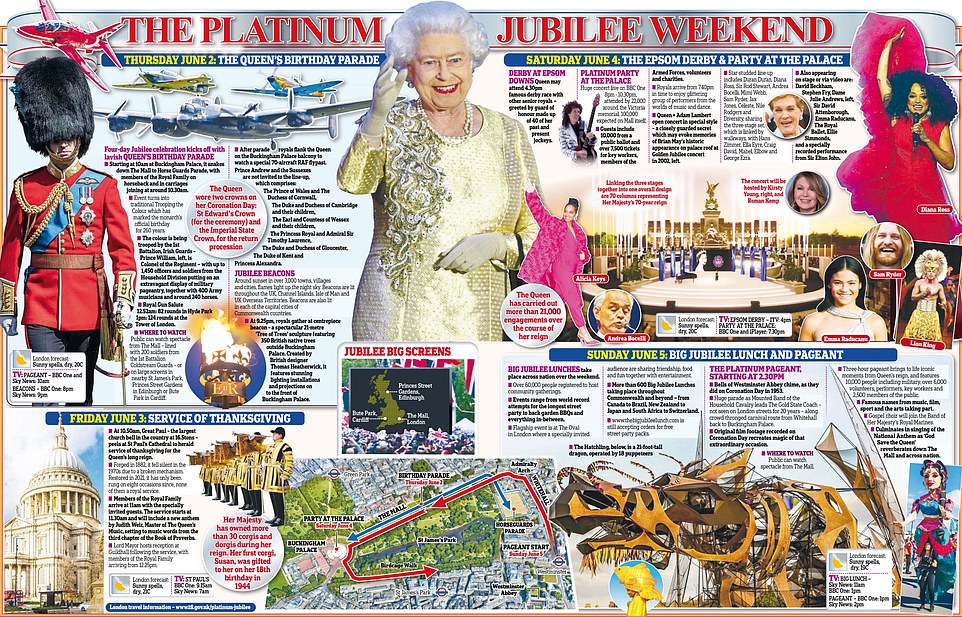